Lifting the shadows on a secret war 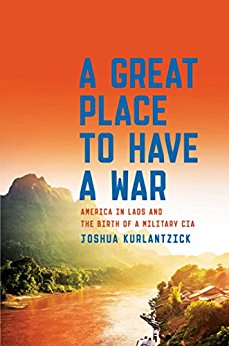 Joshua Kurlantzick, A Great Place to Have a War: America in Laos and the Birth of a Military CIA, (New York, New York: Simon & Schuster, 2017)

“His motto was ‘Kill all, burn all, and destroy all.’ We never took prisoners; he ordered us to kill them and sometimes he would slit their throats,” said one man who worked under the semi-mythical Tony Poe. Poe (Anthony Poshepny) was a clandestine officer in northern Laos who exemplified the rise of the Central Intelligence Agency’s paramilitary operations in the 1960s, and a central character in Joshua Kurlantzick’s new book A Great Place to Have a War: America in Laos and the Birth of a Military CIA.

Poe reportedly offered the Hmong hill tribe fighters under his command a bounty for the severed ears of North Vietnamese and Laotian communist soldiers (page 25). He then shipped a bag full of these ears to the American Embassy in Vientiane as testimony of the numbers of communists his men were killing. According to Poe, a secretary at the embassy opened the bag after it had sat for days in the tropical heat and immediately wretched. These skillfully described excerpts make Kurlantzick’s book eminently readable and admittedly addicting.

At another point, Poe boasted of the scare tactics he used against the North Vietnamese forces: impaling the heads of dead communists on spikes, leaving them along the roadside on display (page 158). He enlisted an American officer in Laos to fly him over enemy territory and from a low altitude, tossed the heads of North Vietnamese from the aircraft, raining down on soldiers below. These exploits may have been known to his superiors in Langley, but Poe proved invaluable to the agency, which kept him as an asset in Laos through the wartime and rewarded him with two intelligence stars (honorific medals), in 1959 and 1975.

Poshepny may have been one of a kind, but increasingly toward the end of the Laos War and in its wake, the CIA relied on eccentric field operatives like Poe, who “got results” no matter the cost. That said, there were a host of other contractors, advisors, diplomats, and US soldiers who shaped the contours of the American secret war in Laos on the ground, and from afar.

Kurlantzick weaves his war narrative through the stories of four individuals: Bill Lair, a young CIA advisor in the field; the Hmong soldier and leader Vang Pao; the highly successful diplomat and former Ambassador Bill Sullivan; and Tony Poe.

This new history is one of a kind, containing original research and an astounding purview of primary sources, many previously unexamined. The author was able to interview three of the characters above (excepting Sullivan), which greatly enhances the book’s perspective, depth, and authenticity. What’s more, Kurlantzick is able to recount what could be an otherwise murky and long-winded historical account with a narrative voice and attention to detail that grip the reader from cover to cover. It’s apparent that the author devoted great time and thought to writing the book, and his intellectual passion for the project infuse it. Endnotes reveal Kurlantzick conducted some of the earliest interviews with subjects over 15 years before publication.

The lack of attention to the scholarship and history of the Laos war make it both a challenging and rewarding research project. It may be the larger lessons from the history of CIA involvement in the Laos war and their relevance (and recurrence) today that make Kurlantzick’s study such a compelling undertaking.

In the 1950s, the national security establishment in Washington became obsessed with the spread of communism following the “loss of China” during the Truman administration. The newly established CIA was fighting turf battles, seeking badly needed funds and resources in an era when the State Department received far more than it did. The leadership of the Central Intelligence Agency believed it needed to prove its mettle and that a decisive overseas battle would best convince a leery congress and White House that it deserved a bigger portion of the pie. Langley’s top leadership was “all for a war in Laos,” according to a former deputy director (page 15). “They thought that [Laos] was a great place to have a war” precisely because it was almost completely unknown and adjacent the highly strategic China. As such, if properly defended, they believed it could serve as a bulwark to the spread of communism in mainland Southeast Asia.

Lyndon B Johnson’s advisors were steeped in lessons they had taken from the “loss of China,” and they impressed upon the president the urgency of a military response to counter the spread of communism (page 119). Their Manichean worldview painted the enemy as absolute, blinding them to the catastrophe of military engagement: a mounting civilian death toll and the ultimately unwinnable war in Laos.

As Kurlantzick makes clear, some Americans involved entered the Laos war with noble intentions. Bill Lair, the dedicated field officer, for instance, placed values and the mission that he believed in – saving Laotian lives and preventing the spread of communism in Southeast Asia – over career status and promotion. This often led to friction with his superiors in Langley and meant he never received the accolades that Tony Poe and others who served in Laos were recognised with.

Kurlantzick portrays Lair as one of the innocents on the American side, a sort of noble dissident, who genuinely cared for the Hmong and tried to improve the lives of Laotians. According to the author, Lair believed the US was helping Laotians to fight a necessary war and that his country was doing the right thing (page 106). Lair opposed the air war and massive bombing campaign in Laos (page 141).

Kurlantzick juxtaposes Lair with figures like Bill Sullivan, who as ambassador in Vientiane essentially managed the secret war for over four years (page 109). Sullivan was a disciple of the veteran diplomat Averell Harriman, whom Kennedy had named ambassador-at-large in the early days of the Vietnam War and in 1962 picked to lead the Geneva talks with the North Vietnamese, which nominally vowed to keep American and Vietnamese troops out of Laos.

The book shows it was the steely and distant foreign policy elite like Sullivan and Henry Kissinger who went all in on a secret war whose human costs they little understood – or cared to know about. A taped recording of President Nixon and his national security advisor picked up the two men discussing the civilian death toll (page 153-154):

Nixon: “How many did we kill in Laos?”

Kissinger: “In the Laotian thing, we killed about ten, fifteen [thousand].”

Ultimately leaks of civilian deaths and the extensive air war made their way to Congress and into the media, undercutting support for the war effort and stoking public opposition. But Sullivan was able to lie before congressional committees and obfuscate enough to prolong military entanglement. For this, Kissinger entrusted him with even greater responsibility, giving him a central role in negotiations with Hanoi.

Despite its real-world blunders, the CIA ultimately concluded that the war in Laos had been a strategic success; it had proven to them they were capable of running a covert war across the world. Perhaps one of the most interesting aspects of the book is the lessons it contains for contemporary policymakers and a vigilant citizenry, with parallels to underreported US military engagement in Yemen, Afghanistan, and Iraq.

But the lessons from the Laos war have not yet been learned, or perhaps some very powerful and unaccountable people have drawn the wrong lessons. In the end, despite the erratic behavior of CIA operatives like Poe, the prototypical covert soldier “had become a template” for the agency’s paramilitary program (page 261). Kurlantzick’s dashing new work teaches us that shadow war will be a critical component of the arsenal the United States employs against its adversaries across the globe in small countries deemed inconsequential or simply off the radar of most Americans.

Hunter Marston is an independent Myanmar analyst based in Washington, DC. You can follow him on Twitter at @hmarston4.

A great place to have a war is available from Simon & Schuster.