Amidst assassinations and forced disappearances of Thai dissidents abroad, a dissident publisher reflects on what it means to “survive” under “Democracy with the King as the Head of State".

In the publisher’s foreword to the recent prison memoir มันทำร้ายเราได้แค่นี้แหละ (That’s All He Could Do To Us) written by Prontip Mankhong, who served time for lese majeste for directing a play in 2013, a line is drawn between “survivors” (phu rod) and those who did not. Back in 2014—not long after the junta took power—that line separated the publisher tasked with bearing witness and providing comfort on one side, and the playwright tasked with bearing the consequences and providing testimony on the other:

I met ‘Demon Child’ Prontip Mankhong one evening in mid-August 2014 in front of the holding cells at Chana Songkhram police station. We did not know one another, even though I had seen her, surrounded by the people, on the theatre stages created from her striking reclamation of the streets.

Gathered in front of her cell, her friends beseeched me—as the only ‘grown-up’ present in their eyes—to comfort her and stop the flow of her streaming tears. But what could I say in such a time of shame and injustice? In that time after the 22 May 2014 coup in which I was one of the ‘survivors’ and you were not? I forced myself to tell her to accept it and think of it as entering into a new theater. Turn it into raw material. Endure to write about it. I promised to wait and publish what she wrote. She kept her promise, and I did as well. [Tyrell Haberkorn’s translation]

Five years on, what now is the defining quality of phu rod, which may also be translated as “those who got away”? Against the creepy disappearances and grisly reappearances of Thai political dissidents abroad, one cannot avert one’s mind from the possibility that such ends could any day now creep into the fates of dissidents living in the kingdom. Now, when no one is safe, it seems more fitting to wonder about death on both sides: very literal death for the political refugee, and less literal death for the dissident publisher at home. I don’t think about death that often, but I’m surrounded by people who see no other fate but death, either for themselves, for their refugee friends, or for our publishing house.

Two Thais walk into a cinema to see the neo-noir action blockbuster John Wick 3: Parabellum. Cue the royal anthem before the film. Please rise to pay respect to His Majesty the King. One remains seated with their mind blank. The other gets up just like everyone else, with the crucial difference being the question fixed in her mind while her eyes remain glued to the images on screen: “Did you kill my friend?”

Back in 2012, when the same independent publisher, Ida Aroonwong of Aan Publishing, gave a talk at Cornell University tentatively titled “The Place of a Publisher in Democracy with the King as the Head of State”, she stated her mission:

If Aan can still do something in a moment like this, that ability rests on our finding a place for them [female subjects affected by lese majeste persecutions] to stand with dignity through collaboration to produce or publish their stories. So that, both they and Aan may still be somebody with a vocal voice who remain as unscathed (khlaew khlaad) as possible, both as women and as subjects of Thailand, a democracy with the king as the head of state. [my translation]

The year 2012 was a much more open and vibrant time for domestic debate through cultural and artistic work, even though the abuse of the lese majeste law was on the rise. At least we had a democratically elected government, and the royal succession hadn’t happened yet. It was still possible for a very small and very dissident publisher like Aan to talk about maintaining dignity and survival in the same breath.

Now, in 2019, eleven years into Aan’s eventful run, we have no new lese majeste cases—we have bodies stuffed with concrete beach on the Mekong. Maintaining dignity, or avoiding losing our last shred of it, becomes increasingly difficult to do without thinking of death. If Aan is to continue, then its mission will mostly progressively be hollowed out. Perhaps what sets “survivors” apart is not the fact that they have yet to die, but that they have yet to be stripped of the choice to die and release themselves from duty on their own terms.

My daily commute between work at Aan and home happens to pass through Bangkok’s historical centre. The area was recently redecorated with shades of yellow and marigold for the coronation ceremony in early May. On one such commute, I was admiring the contrast between the smoky blue evening sky and the clear yellow from the lightbulbs draped over scrawny trees flanking Ratchadamnoen Boulevard.

Suddenly an idea occurred to me: “This beauty was paid for by the people’s tax and made possible by gruelling labor called in at the last minute.” This idea didn’t diminish the beauty in front of my eyes, but it did make me feel like a subject of the kingdom. This feeling of subjection came with neither dejection, rejection nor guilt, but a mute complicity. I enjoyed the lights for what they were: a feast for the eyes of subjects.

The scene brought me back to my curious state after I watched John Wick. I felt really confused by the experience of seeing the ultraviolent movie right after seeing King Rama X’s propaganda videos and listening to the royal anthem. I couldn’t help but wonder if other people felt something like a dysfunctional light switch, in the intermission between neo-yellow and neo-noir, between the politics of joyous fealty and the aesthetics of eye-stabbing violence. Sure, it’s habit. Now stand up, and now sit down, Thank You Teacher. Now wear black, and now wear yellow, Long Live the King!

Are authoritarian habits strong enough to sap the will to freedom? I don’t think so. Yet somehow I can’t shake the feeling that I’m here in this kingdom on borrowed time—the feeling that getting to go see John Wick 3: Parabellum was something some people up there had allowed me to enjoy. Half-seeing gruesome deaths on screen as a paying accomplice is much like being allowed to half-witness forced disappearances in the real world as a conscientious ally, but unable to put a stop to them.

Yet the feeling that I’m here on borrowed time entails a wilful mischief to continue working to push the envelope—to make the most of it while I can. I can’t know at this point if I’ll get away with anything unscathed, when those disappeared are as good as dead (pen tai thao kan) and the publishing house I work for sees no way forward and no way out but death. I’m not hanging on to any false hope. I just know for sure that I’m full of energy, that I am alive in the writing and in the work at this publishing house.

When time isn’t on our side, life is on my side. When nothing feels light, there is this light. It’s not an all-encompassing divine light, nor is it messianic by any means. Yet, like the light of the firefly mentioned in the opening pages of That’s All He Could Do to Us, it is the most alive light there is.

The author is a co-editor of Prontip Mankhong’s prison memoir, มันทำร้ายเราได้แค่นี้แหละ (That’s All He Could Do To Us). To purchase a copy, please go to Aan’s shop. An English translation is in the works. 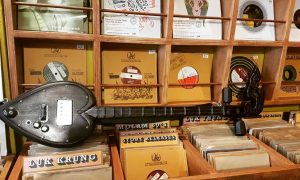 During the 1960–70s, Thai government agencies distributed vinyl records to raise awareness of elections. As historical documents, they offer insight into the country's turbulent political history.