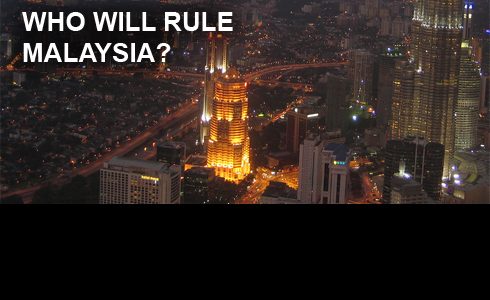 1.30 AM: Goodnight from New Mandala. We will be back with more commentary tomorrow.

1.30 AM: Does GE13 signal the end of ethno-communalist politics in Malaysia?

1:25 AM: A video of Ross Tapsell and Greg Lopez discussing their preliminary analysis of the election result is now online. Well worth your time, especially for the cheeky reference to Canberra’s famous flower festival. Lopez and Tapsell will be back with more analysis tomorrow morning.

1:21 AM: A further analysis of the election as we read it late on Sunday night is available here.

1:14 AM: ANU PhD candidate Colum Graham shines a light on the Election Commission and some of the key issues relevant to the outcome of today’s General Election.

1:03 AM: Counting still continues slowly. New Mandala‘s operations in Canberra are also moving into a quieter phase. There will be some further contributions tonight (analysis and video) followed by extra comments in the morning. It will only be once the dust has settled tonight that any final conclusions can be drawn.

12:28 AM: Earlier in the night we had this post about vote buying. How widespread do you think these issues are?

12:23 AM: Is there a swing to the opposition looming over the horizon? Perak? Sabah? Still seems likely that BN will win with a reduced majority. More on these points to follow.

12.12 AM: ANU alumnus, Liew Chin Tong, of the DAP, who had ventured from his safe seat in Penang, now a DAP stronghold, into the UMNO bastion in Johor, has taken the seat of Kluang, once again confirming that the Malaysian Chinese community has abandoned the Barisan Nasional and its component party, the Malaysian Chinese Association.

12.07 AM: Twitter full of reports that Nik Abduh Nik Aziz of PAS has defeated the Malay chauvinist leader of Perkasa, Ibrahim Ali, in the seat of Pasir Mas in Kelantan.

12.02 AM: Anwar claims that Pakatan Rakyat has won GE13. Does he know something we don’t?

11.55 PM: National summary. Sawarak is not trending strongly for the Opposition at the moment, however, those seats lost mostly not been the ones targeted by the Opposition. In this sense, it is hard to extrapolate these results as representative of the national mood. There has been a lack of reporting of seats in Sabah, the other and bigger state in East Malaysia. Although Kota Kinabalu, the state capital sees the Opposition in the lead. Across Peninsular Malaysia, BN retains Kedah while Opposition component party DAP retains Penang. The southern state Johor, another one of Barisan’s “fixed deposits” – states that are hitherto reliable Barisan strongholds, with its large number of Chinese Malaysians – seems to be under pressure from with veteran DAP leader Lim Kit Siang leading strongly in the hot seat of Gelang Patah. So far the counts across the nation have been from rural and smaller precincts, while the counts for larger urban seats that tend to trend Opposition will come later.

11.54 PM: In the hot seat of Lembah Pantai in the heart of Kuala Lumpur where the predominantly Malay electorate, and where the rich and the poor live virtually next to each other, Pakatan Rakyat , represented by Nurul Izzah, the daughter of opposition coalition leader, Anwar Ibrahim, and also talked about as a future Prime Minister, leads the Barisan Nasional representative, the Federal Territories Minister, Raja Nong Chik.

11.50 PM: Helen Ang, a popular blogger among Barisan Nasional (BN) supporters had noted that Gelang Patah, in the state of Johor – the birthplace of UMNO and a long time bastion is a game changer. She notes that if the opposition DAP wins, it will wipe out the government MCA (Malaysian Chinese Association) in Johor. This seat is currently held by the MCA. But the MCA has had to give up this seat as it was anticipated that it would not be able to retain it as the Malaysia Chinese community had revolted against the ruling coaltion.

11.47 PM: According to Malaysiakini “On the spot analysis: Based on this early results, it appears that there is a swing among Malay voters to BN.” This suggests a poor showing by the Opposition coalition today. Notwithstanding the excitement within non-Malay communities, an Opposition win cannot come without significant Malay support. 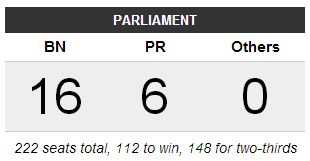 11.00 PM: Borneo Post tweets that DAP has taken the seat of Lanang from BN. Defeated BN candidate, Datuk Seri Tiong Thai King is a member of a major business dynasty in the state.

10.49 PM: The Star claims both sides are claiming victory. Well at least it is balanced… 10.21 PM: There are 222 Parliamentary seats that are being contested. Sabah and Sarawak collectively has 56 seats or 25 per cent of the total parliamentary seats. Pakatan Rakyat could win the popular votes on the Peninsular, and may even win the a thin majority there but unless they win Sabah and Sarawak, they will not be able to form government. Sabah is the opposition’s best hope as they are unlikely to make any serious dent in Sarawak. The importance of Sabah and Sarawak in this elections are elaborated in here.

10.11 PM: According to Malaysiakini, Lim Kit Siang has taken the lead…

9.58 PM: Veteran DAP opposition member, and former opposition leader, Lim Kit Siang is trailing long-serving Johor Menteri Besar (Chief Minister) from UMNO. William Case maybe correct at this point in time. 9.50 PM: The New Straits Times is reporting, unsurprisingly, that BN has already won Putrajaya 9.37 PM: How have Chinese Malaysians reacted to the election? 9.14 PM: A post-election climate without trust? Police have warned that they will take action against people gathering or having processions after the election. 9.11 PM: Contrary to rumour Mahathir did not leave the building. 9.09 PM: Prime Minister says credibility of the electoral process should not be questioned. 9.00 PM: Mohd Zin Mohamed was very confident:

“To all peoples of Malaysia, thank you for the faith and mandate given to Barisan” Written three hours ago. Did Barisan Nasional already have a mandate in Sepang?

8.59 PM: For some social context and background for today’s election we have two pieces: one on Islam and one on women. Both key issues in the 2013 poll.

8.35 PM: Ross Tapsell and Greg Lopez of ANU College of Asia and the Pacific set the scene for tonight’s coverage of the Malaysia General Election. They discuss the possible outcomes once the votes are counted, the role of social media in #ge13 and what to watch for as the results roll in.

8.06 PM: The tension builds. Plenty of focus on the high voter turn-out (reportedly 80 percent) and the challenges of dealing with such a starkly divided polity.

7.58 PM: Pick a winner, take two. Paul the “World Cup” Octopus has come out of retirement (with a little help from a favourite editing tool) to call the 2013 Malaysian election.

7.53 PM: Pick a winner. Image purporting to be indelible ink coming off and colouring on contact. 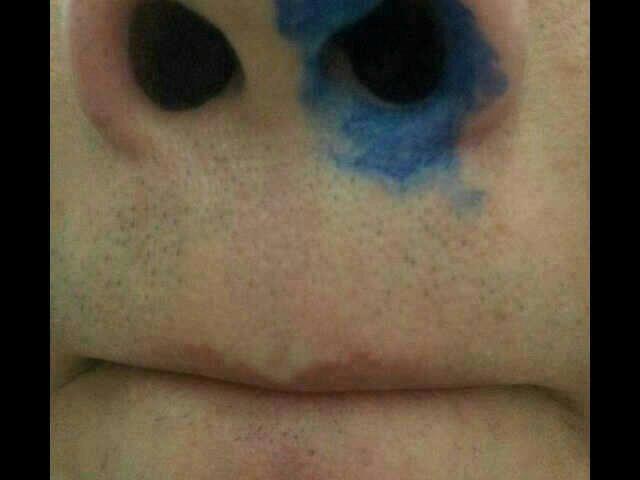 7.51 PM: Plenty of noise from those concerned about “foreigners” voting in the Malaysian election. Some of the related Tweets are available here.

7.33 PM: Anwar’s being diplomatic: “Stopped for a while with a rival candidate to say hello after voting. We respect our diverse political culture.” 7.21 PM: One view from civil society. Ong Bk “The problem is: the civil society and the Opposition parties are not doing enough to scrutinise the election administration eg Opposition parties who have to buy expensive electoral rolls for their own use would not share it with other analysts or election observers groups-though the results are advantageous to them and the nation’s democracy. By putting the hope of change in just the electoral process the change movement can be a bit thinly based-if the values in society, and the organisation based on them, are not that solid/well developed!” 7.13 PM: Polling has officially closed throughout Malaysia. According to Electoral Commission first results due in two hours.

Very conscious while I make rounds in Gelang Patah on Polling Day 2day could be last day in my 47-year political struggle 4new/just Malaysia – Lim Kit Siang (@limkitsiang) May 5, 2013

7.08 PM: With Malaysia’s media firmly falling on the side of Barisan Nasional, how much can we trust what is being reported? Media freedom expert Ross Tapsell asks whether #GE13 is an election without democracy. 7.06 PM: Malaysiakini has coverage of scuffles in Penang. Read more here. 7.00 PM: Is this an election without democracy? 6.50 PM: Is #GE13 really the first election where UMNO is on the back foot? Long time Malaysia watcher Tony Milner says it’s more like history repeating. 6.40 PM: ANU political scientist Ed Aspinall writes about prospects for change. 6.31 PM: Malaysians love their political Tweets even on ordinary days. Today isn’t ordinary. Follow the Twitter action with #GE13. Our @newmandala is, naturally enough, in the mix. 6.20 PM: A short and simple explanation of Malaysia’s electoral system. 6.10 PM:

I trust the rakyat will make a wise decision based on their level of confidence in the country and what lies ahead for Malaysia #GE13 – Mohd Najib Tun Razak (@NajibRazak) May 5, 2013

4.40 PM: Political scientist William Case argues that the opposition Pakatan “will not win”

New Mandala‘s live coverage of Malaysia’s election will commence at 6 PM this evening (Canberra time; 4 PM in Kuala Lumpur). We will have updates and commentary throughout the night.