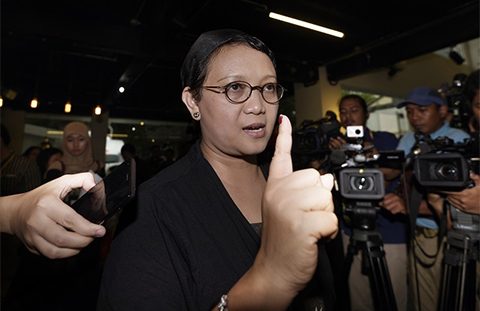 On 6 November 2015, I published an article on the New Mandala website hosted by the Australian National University. New Mandala is a forum many academics working on Indonesia use to raise important issues related to politics, economics, and society. My article raised some key questions about Indonesian President Joko Widodo’s recent visit to the United States of America.

My article refers to a document which has been available in the public domain since 17 June 2015. The document can be downloaded from the US Justice Department’s Foreign Agents Registration Act website via the following link: http://www.fara.gov/docs/6229-Exhibit-AB-20150617-3.pdf. It is an online record of a Services Agreement that all lobbyists working on behalf of a foreign government must file with the US Justice Department.

Over the past 10 years, I have dedicated much of my research and academic writing to accountability and transparency by reporting on everything from local politics, to the health care system and policymaking in Indonesia. These important topics are normal for academics to investigate and analyse.

Because some media have reported incorrectly on the content of my article, I first want to issue a simple clarification: Contrary to some reports in the media, nowhere in my original article did I write that a lobbyist was hired to facilitate a meeting between Indonesian President Joko Widodo and US President Barack Obama. Everyone knows that President Obama invited President Widodo to visit the United States, and that this visit was arranged long before the lobbying contract mentioned in my article was filed.

Few people have asked why official statements from the Government of Indonesia contradict the information recorded in the Services Agreement, available at a US government website. The Indonesian government denied that it hired lobbyists, while this contract clearly states that a lobbyist was “retained as a consultant by the executive branch of the Indonesian government.” Lying on this document is a criminal offense in the US, punishable by up to five years in prison.

Concretely, the official document filed with the US Justice Department on 17 June is a Services Agreement between Singapore-based consulting company Pereira International Ltd and Las Vegas-based lobbying company R&R Partners.

In this Services Agreement, Pereira International Ltd purportedly buys the lobbying services of R&R Partners in exchange for US$ 80,000. The document lists, among others, the following services:

The excerpt from the original document is below:

The Foreign Principal is listed under Point 10 as “Derwin Pereira, CEO”:

The excerpt from the original document is below:

Furthermore, Point 8 in the “Execution” part of the Services Agreement states the following:

Arrange and attend meetings with key policymakers and members of the Congress and the executive branch including the Department of State;

Attempt to secure opportunity to address joint session of Congress during President Widodo’s visit to the US; and

Identify and work with influential individuals, media, public and private organizations and affiliates in the US to support efforts of President Widodo.”

The excerpt from the official document is below:

On Saturday, 7 November 2015, Foreign Minister Retno Marsudi said that neither the Ministry of Foreign Affairs nor any other branch of the Indonesian government hired a lobbyist. This is in direct contradiction to the Services Agreement filed with the Justice Department of the United States of America.

Concretely, the Ministry of Foreign Affair’s statement released 7 November 2015 says: “7. The Government of Indonesia did not employ the services of lobbyists for the preparation of the President’s visit to the US. The Ministry of Foreign Affairs has also never used the Ministry’s budget to employ lobbyist, although the Ministry understands that lobbyists are a real part of the US political life and are frequently employed by stakeholders as well as other governments around the world to advance their interests in the United States.”

My questions raised in the initial article were the following:

1) Who within Widodo’s government ordered Pereira to make the payment?

2) Was Indonesian taxpayer money used to hire a Las Vegas lobbying firm to deliver services that Indonesia’s US embassy could have easily put together?

3) Was this done in coordination with foreign affairs minister Retno Marsudi, or was this an attempt to bypass the ministry?

4) If the latter, is Widodo in control of his government, or are there too many competing interests in the president’s inner circle to devise a coherent foreign policy agenda?

On 8 November, the Indonesian Embassy in Washington D.C, US, also denied that the Government of Indonesia had hired a lobbyist.

1) If the Government of Indonesia did not use any lobbying group or actors, who funded Pereira Ltd in Singapore and R&R Partners in Las Vegas?

2) Did Pereira falsely claim to work on behalf of the Government of Indonesia?

False claims and misrepresentation are illegal under the Foreign Agents Registration Act (FARA) as the excerpt below shows:

ENFORCEMENT AND PENALTIES
Any person who willfully violates any provisions of this Act or any regulations thereunder, or in any registration statement or supplement thereto or in any other documents filed with or furnished to the Attorney General under the provisions of this Act willfully makes a false statement of a material fact or willfully omits any material fact required to be stated therein or willfully omits a material fact or a copy of a material document necessary to make the statements therein and the copies of documents furnished therewith not misleading, shall, upon conviction thereof, be punished by a fine of not more than $10,000 or by imprisonment for not more than five years. For some offenses the punishment shall be a fine of not more than $5,000 or imprisonment for not more than six months, or both.