“Loss of faith in democracy lets hardliners stick in the boot” 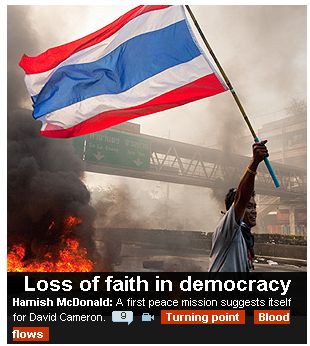 From Hamish McDonald in The Sydney Morning Herald:

Between 2006 and 2008, he [Abhisit] and his political cohorts in the Democrat Party were doing much the same thing as the Red Shirts are doing now. First they boycotted elections the Red Shirts’ hero, billionaire Thaksin Shinawatra, was likely to win, resulting in annulment. Then, when a military interregnum failed to keep Thaksin’s proxies out of power, they blockaded government buildings and Bangkok’s airport.

Thaksin is no saint: he massively abused office to protect his private fortune, and authorised extra-judicial killings against suspected criminals and Muslim insurgents. Now holed up in Montenegro, he deserves to face trial, not to be re-elected. Yet it’s unfair to dismiss the Red Shirts as simply his hirelings, beyond reason.

As the Australian National University specialists Andrew Walker and Nicholas Farrelly note on the ANU’s New Mandala website, there’s a more fundamental reason for the Red Shirts’ reluctance to accept the election offer. Even if the November election was held, why should the Red Shirts expect that the royalists would not overturn an unwelcome result, either by more street politics or by compliant judges? ”Could they rely on the palace to add its moral authority to a defence of the electoral process?” Walker and Farrelly write. ”Of course not.”

”Thailand’s fatal flaw is its loss of faith in the electoral process. This loss of faith has opened the way for hardliners to pursue violent alternatives. Violence on all sides is deplorable, but remember that those who condemn the Red Shirt provocations most vigorously are also those who have consistently denied the legitimacy of their peaceful statements at the ballot box.”

All of Thailand’s friends are leaving it to stew in its own mess – its fellow members of the Association of South-East Asian Nations, the West, including Australia, Japan and China. Only Jose Ramos-Horta of East Timor has made an attempt to negotiate a settlement.