Nien Yuan concludes her three-part series on the SG Bicentennial with The Necessary Stage’s Civilised, which reveals important differences from and surprising similarities to the previous two events analysed. Civilised was staged over a short two-week sold-out run in May. But while the show might be over, the conversation about decolonisation shouldn’t be.

The same week I saw MY Bridge of Light—essentially a Singapore history textbook presented in a heartwarming, unoffensive and linear narrative (see Part Two here)—I also saw Civilised, a play in which characters on stage call Sir Stamford Raffles a “baboon’s butt” to raucous laughter. What’s more, a naked, brown-skinned man is put up for auction, William Farquhar almost has a #metoo moment, and the Internal Security Act is defiantly shown as a form of neo-colonialism. “Heartwarming art.” “Community art.” “Happy art.” “Subversive art.” “Nation-building art.” Performer Koh Wan Ching recites parts of this list off at various points in the play with a smirk on her face and a drink in her hand. Despite the fact that, at some point in The Necessary Stage’s illustrious history, director Alvin Tan and playwright Haresh Sharma have engaged with all of these art forms, it is clear that Civilised is not keen to reproduce any tropes from these genres. Instead, the production employs satire, humour, bricolage, and an endlessly talented ensemble to parody them. That’s not to say that it’s all fun and games. Their laughter is laced with anger and defiance. There’s a snarl behind every megawatt smile as, for instance, Siti Khalijah Zainal and Edith Podesta cheerily ask the audience if they would be interested in bidding for Ghafir Akbar’s “brown butthole”.

Various forms of colonialism and imperialism—past and present, domestic and transnational, private and public—are re-presented here in the form of short vignettes ranging from a segment on the displacement of indigenous peoples in Canada to a disturbing scene of a wife systematically and abusively breaking her husband’s spirit down. These segments incrementally contextualise the later parts of the play, which address the SG Bicentennial and colonialism in Singapore in hilarious and complex ways (in a glorious “climax” real footage of the statue of Raffles is shown on screen facing fireworks on the Singapore River, angled in a way as if the man was just a bit too self-satisfied with his continued importance in Singapore society). To complement this bricolage approach, a sense of energetic play that constructs and dismantles each segment, like so much Lego bricks, threads the show together. The set, designed by Vincent Lim, curves and dips like the vessels which has facilitated so much violence in the world, or even like a skate park’s halfpipe as performers wheel and tumble across its length. Likewise, many objects in Civilised are transmutable: a white stool can become a cooking stove, an astronaut’s helmet, a wheel on a spaceship door. As scenarios are built up and taken apart, so are the performers themselves, who are more like avatars: they change accents, moods, backstories, tongues, and even their costumes (designed by MAX.TAN) are sometimes paper doll-esque cardboard cut-outs. But at some points, the performers can seem stripped bare—both literally and figuratively, and we can catch glimpses of how there is a personal stake for them in this fight. Making and unmaking; constructing, deconstructing, and reconstructing again: this is the approach Civilised takes towards dealing with the monumental task of decolonisation itself. As Singaporeans, or even just as citizens of a morally ambiguous (or bankrupt?) world, there is no single solution for the vast inequalities we now face. As the play points out, we travel for third-world prices; we buy clothing of dubious origin; we turn a blind eye to awful things happening elsewhere; we destroy our planet while looking for new ones to conquer. Civilised doesn’t offer answers, it offers an attitude, a critical disposition. The play constantly turns back and critiques itself, poking holes in its own argument and prompting audience members to do the same.

One especially awkward moment of audience interaction (in the performance I saw) highlighted this: Siti Khalijah Zainal goes around the audience with a loudhailer, asking them what they thought of various atrocities around the world and positioning the device to their mouths. But instead of amplifying their voice, the loudhailer screams “NOT MY PROBLEM!” in a Singaporean accent. It’s a funny gag, until Siti goes to one audience member, who earnestly attempts to say what she thinks. The loudhailer silences the woman instead. In the show, Civilised claims to have decolonised the theatre space. But that claim is obviously made tongue in cheek, with the knowledge that even for a tiny black box theatre (with an acknowledgement of the traditional custodians of the sea upon which the theatre is built to boot), there is no equal sharing of power.

In one of the show’s more “meta” scenes, where the performers grapple with the subject of the play as “themselves”, Ghafir Akbar asks how we might “decolonise our mind”, or change mindsets that have congealed over the years. I think the play asks a more encompassing question: how can we possibly decolonise our body? It’s a similar question asked by NTU CCA’s Arus Balik exhibition (in Part One of this series). Let’s start with our tongues, which is a major consideration in the play (as with most TNS productions). As post-British subjects, we have adopted English as our lingua franca and in the process have lost the organic means with which we used to communicate with one other. At the play’s beginning, Lian Sutton deliberately and ironically spits on colonialism with perfectly enunciated Queen’s English (“they lied and cheated!”). Later the ensemble debates the ethics of using English at all in the play. Ghafir decides to boycott the language, instead going on a brilliant extended monologue/rant in Malay about how, in the past, Singaporeans could understand one another in Chinese, Malay, Hokkien, and so on. There are no surtitles for this segment, making the scene somewhat alienating for the non-Malay speaking members of the audience and proving Ghafir’s point. However Ghafir gives up after a while as the barriers to communication prove too difficult.

Decolonising the body is not easy. As Alvin Tan puts it in the program, “the conflict/trauma continues because how do you eradicate a language/culture that you have grown so intimate with, and which is now a part of who you are?” The colonial, past and present, is in our muscles. It is in the way we move, eat, drink, do yoga, sit, and speak.

The SG Bicentennial: cruel but necessary?

In some surprising ways, Civilised is not so different from MY Bridge of Light. Despite its treatment of global issues, it is ultimately nationalistic, calling for a better Singapore. In the epilogue, the cast practically yell it out: “If you don’t care about anyone else, at least care about your own fucking country.” It’s a jarring statement, strangely insular compared to the scale of the rest of the play. But it reminds the audience of the context surrounding the play right then: the strange scenario Singaporeans find themselves in where they are encouraged to commemorate their colonisation. A review of the play on The Straits Times bemoans the lack of a “satisfying whole” out of “patchy bits”, but in my view the lack of a singular narrative is precisely the point. Singapore is up to the neck with dominant, grand narratives and satisfying plotlines, a hallmark that the SG Bicentennial continues to perpetuate. But perhaps the Bicentennial, like the salted fish skin fed to us in the beginning of the Civilised, is a “cruel but necessary” thing. Its inconsistencies and paradoxes remind us of its very anachronism.

Civilised is The Necessary Stage’s ‘quiet riot’ against this phenomenon. The downside is perhaps it is too quiet—in its two-week sold-out run, only a little over a thousand people got to see it due to the size of the space. That said, while the show may be over, the conversation needs to keep going. 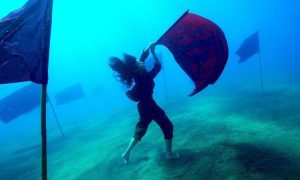