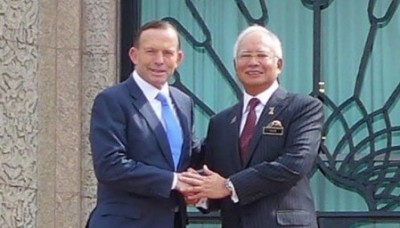 Prime Minister Tony Abbot was in Malaysia recently – thumping fists and shaking hands – with very interesting members of the ruling regime, in the midst of its crackdown on dissent.

I could not have asked for a wiser or a stronger friend and counsellor in these tough and difficult times.

Geoff Wade, visiting fellow at the Crawford School of Public Policy, at the Australian National University, in his analysis, had this to conclude:

The geographical proximity of Malaysia and Australia–and the huge range of interests and links the two countries share–form a remarkable contrast to the degree of attention the Australian media assigns to that country. Mr Abbott’s fleeting visit was intended to bolster some aspects of these links, but it is of critical importance that more Australian attention be paid both to the domestic politics of Malaysia and to the growing collocation between Malaysian politics and events in Iraq and Syria.