Malaysia in 2014 – A perspective from Thailand 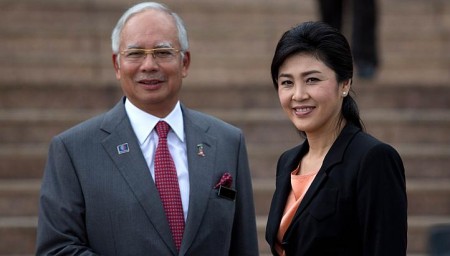 Thai-Malaysian relations have in the past decade been predominantly shaped by the situation in the three southernmost provinces of Thailand. In 2004, under the Thaksin Shinawatra administration, an Islamic insurgency re-erupted, seen in the incidents at Krue Sae Mosque in Pattani, where 32 Muslim militants were executed, and at Tak Bai district in Narathiwat, where 78 Muslim detainees suffocated to death while being transported to a military camp.

But the real turning point in Thai-Malaysian relations took place in August 2005 when 131 Thai Muslims fled across border into the Malay northern states. Reportedly, Malaysian Foreign Minister Syed Hamid Alba agreed to release them only if Bangkok could “guarantee” their human rights and safety. Thaksin was infuriated, perceiving his remarks as interfering with Thailand’s internal affairs.

Malaysia subsequently proposed a dialogue to resolve the problem as a means to defuse tensions. Accordingly, Malaysian Prime Minister Abdullah Badawi and former Prime Minister Mahathir Mohamad held informal discussions with former Thai Prime Minister Anand Panyarachun, who was then the head of the National Reconciliation Commission. They reassured Anand that Malaysia did not support the separatist movement in Thailand.

But the complexity of Thai politics and its impact on the issue of the southern conflict has continued to influence bilateral relations. As Thailand attempted to isolate its southern conflict, it also isolated Malaysia. Such isolation reflected on a Thai policy of externalising the cause of conflict, and Malaysia was painted as a prime manipulator behind the Thai Muslim insurgents.

In December 2009, Malaysian Prime Minister Najib Razak, in striving to improve ties with Thailand, made a high-profile visit to Narathiwat. Najib said, “I don’t expect things to change overnight. This is a journey, but there is a commitment and plans by Thailand to move toward a comprehensive solution. Malaysia’s stand is to be a partner who will respect that this is domestic, and the message is clear that the people of Thailand must be loyal to the country.”

Clearly, Najib’s mission was to dispel the existing mutual distrust. At the end of the meeting, the two countries initiated a number of joint projects to rebuild Thailand’s southern region. For example, Thai Muslim teachers were to be trained in Islamic teachings in Malaysia and Thai businesses invited to visit Malaysia with the possibility of investing in the country.

In June 2013, peace talks between the Thai government and members of the Barisan Revolusi Nasional (BRN) reached a milestone when the two parties decided to sit down to discuss ways to rebuild mutual trust, eliminate suspicion and to find a long-lasting solution to the protracted conflict. Malaysia hosted the peace talks in Kuala Lumpur signalling a new role as a peace mediator.

Malaysian Defense Minister Hishammuddin Hussein told the media that he was hopeful of progress through development of the southern provinces: “The issue of development, poverty, fair treatment of everybody – those are the issues to be navigated by both sides based on trust. Building up trust is the difficult part.”

Until recently, Thai Prime Minister Yingluck Shinawatra has tried to reach out for peace with the Thai Muslim community and for better ties with Malaysia. There were obstacles to the government’s efforts. For one, local Thai Muslims could not forget what her elder brother, then Prime Minister Thaksin Shinawatra, did in 2004. In the political context, the south has never been the territory supportive of the ruling Pheu Thai Party, but instead, are long-time supporters of the Democrat Party – the current opposition party.

Thailand has fallen into another crisis and Yingluck’s resolve will once again be tested. It has been more than three months since the anti-government protesters seized Bangkok, driving Yingluck to dissolve the parliament. General elections were held but outcomes were inconclusive. The Yingluck administration is now in a limbo. The Thai political situation is unpredictable, to say the least.

Daily killings in the restive south, meanwhile, have been normalised. The more Bangkok is preoccupied with other domestic crisis, the longer the insurgency will prolong in the south. Since the last meeting between the government and the BRN, the Thai public is in the dark regarding progress on the peace talk. If the violence escalates in the Thai south, it will further complicate Bangkok politics and Thailand’s relations with Malaysia.

Insurgency issue aside, democratic and anti-democratic movements in Thailand could also impact Malaysia. Political power in Thailand, long dominated by the old elite, are now being seriously challenged by new political alternatives. The end game could be traumatic. The imminent royal transition could serve to exacerbate the already fragile situation. In Malaysia, the United Malays National Organisation has been in power for far too long. It has been too inert, complacent and perhaps too authoritarian. The Thai example could influence political developments in Malaysia, particularly through the rising political awareness of the Malaysian masses and their demand to gain better access to political resources, economic wealth and better social status. Like Thailand, it will be interesting to see where Malaysian politics would be heading towards– reforms or struggle?

Pavin Chachavalpongpun is associate professor at Kyoto University’s Centre for Southeast Asian Studies. He is the author of ‘Reinventing Thailand: Thaksin and His Foreign Policy’.