On Sunday, 21 May, Rohingya community members, local leaders, and NGOs working on human trafficking gathered at a Rohingya graveyard near Alor Setar, Kedah to commemorate the second anniversary of the discovery of mass graves and trafficking camps at Wang Kelian. I attended representing Tenaganita, an organisation that has worked on migrant rights and human trafficking issues in Malaysia since 1991. After prayers were said for those who did not survive Wang Kelian, community leaders spoke of the challenges the Rohingya community faces today. In a mixture of Malay, English, and Rohingya, trafficking survivors described their experiences coming to Malaysia. One survivor had seen three men from his village die at the hands of a trafficker and another described being sold seven times while on his journey to Malaysia. NGO representatives spoke passionately about fighting the corruption that allows traffickers to operate with impunity in Malaysia.

Two years after the discovery of 28 human trafficking camps and mass graves containing 106 human skeletal remains near the Malaysia-Thailand border, traffickers and complicit authorities have not been held accountable. In March 2017, twelve Malaysian police officers investigated for their involvement in human trafficking camps and mass graves were released due to the lack of ‘strong evidence’. While Thai and Myanmar authorities have been prosecuted, all Malaysian officers alleged to have known about the camps have received impunity, despite allegations that officers were complicit in trafficking of Myanmar, Rohingya, and Bangladeshi migrants and asylum seekers across the border into Malaysia. 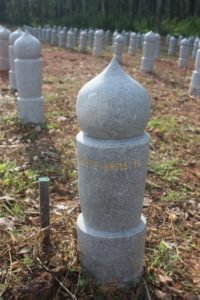 Penang Stop Human Trafficking Campaign and Tenaganita have called on Malaysian authorities to address the corruption that allows Malaysia to be a trafficking hub in the region. At the Wang Kelian memorial, Mohd Azmi Abdul Hamid of MAPIM, the Malaysian Consul­tative Council of Islamic Organisation, stated that authorities should work with trafficking survivors to identify the ‘big fish’, the leaders of trafficking syndicates and the corrupt Malaysian officials who allow them to operate. Tenaganita recognises that the camps and bodies found at Wang Kelian are just the tip of the iceberg—currently, the Global Slavery Index estimates 128,800 individuals are trapped in modern day slavery in Malaysia. That’s about 0.4% of Malaysia’s total population, putting Malaysia among some of the least responsive countries to combat human trafficking.

While the trafficking camps and mass graves found two years ago are potent reminders of the deadliness of trafficking, it is also important to note that there are multiple trafficking schemes seen in Malaysia. Beyond forced labour and sex trafficking, Tenaganita has uncovered cases of marriage trafficking, the sale of babies, organ harvesting, child prostitution, and child marriage. Not all trafficking happens across the Malaysia-Thai border. Traffickers often use budget flights to bring men, women, and children into Malaysia for exploitation. Many of Tenaganita’s cases involve women trafficked to Malaysia for forced labour as domestic workers, which counters the stereotype of trafficked women only being victims of sex trafficking. Like refugees and migrant workers, domestic workers are not adequately protected under Malaysian law. Traffickers know this and often exploit people who are eager to come to Malaysia, such as asylum seekers fleeing their countries or women desperate to support their families. Corruption, inadequate training of enforcement officers, and limited awareness of trafficking dynamics all contribute to the lack of enforcement of Malaysia’s Anti-Trafficking in Persons and Smuggling of Migrants Act (ATIPSOM). Only a fraction of all prosecutions for trafficking crimes result in convictions according to the 2016 US State Department Trafficking in Persons Report, which states, ‘accountability for traffickers remained disproportionately low compared to the scale of the human trafficking problem in the country’.

Trafficking prevention has not been adequately addressed at the national or regional level. For example, there are no mechanisms for safe repatriation, or the protection of trafficking survivors upon return to their country of origin to ensure they are not re-trafficked. Traffickers nimbly operate across borders—governments and enforcement agencies must also work closely together when prosecuting traffickers, protecting survivors, and preventing trafficking crimes. The newly ratified ASEAN Convention Against Trafficking in Persons, Especially Women and Children (ACTIP) takes steps in the right direction, but does not incorporate cooperation by civil society organisations like Tenaganita who have been fighting human trafficking for decades. At the graveside memorial, I saw that the lives lost at Wang Kelian had not been forgotten, at least by the Rohingya community and organisations working on the issue. But despite some efforts to enact legislation, the Malaysian government still lacks the political will to address issues that mostly affect non-Malaysian workers, migrants, and refugees, all of whom are acutely vulnerable to trafficking, forced labour, and debt bondage. It is now time for Malaysia to get serious about enforcing existing legislation and especially going after the collusion between authorities at all levels and trafficking syndicates. The horrors of Wang Kelian must not be allowed to continue, whether through the trafficking of refugees across the Thai border or the trafficking of young women into domestic servitude within Malaysian homes. Unless there is a concerted effort to tackle the human trafficking business in the country, Malaysia will continue to be a trafficking destination.

Rebecca Schectman has worked with UNHCR and Tenaganita in Kuala Lumpur, Malaysia as a 2016-17 Luce Scholar. She graduated from the College of William and Mary in 2016 with a degree in International Relations and Latin American Studies. She has worked on issues ranging from preserving memory of human rights abuses in Argentina to studying citizen feedback platforms in Uganda. Her research interests include migration, forced displacement, development, and human rights.

All photos are taken by the author.