With the availability of new electoral data, researchers have been able to conduct in-depth analysis of the 2013 General Election (GE13) results in Malaysia. The incumbent Barisan Nasional (BN) was able to capture 59.9 percent of parliamentary seats even though they had only won 47.4 percent of popular votes. To be sure, malapportionment (mismatch between vote and seat shares) is evident in many countries with the single-member district plurality system. However, Malaysia is among the world’s top offender in this respect, as I have previously argued. After it’s near electoral defeat, the BN government had described the GE 2013 as a “Chinese tsunami”, attributing its declining popularity to betrayal by the Chinese voters. Was race still the deciding factor in the election, or were there more important factors at work? Additionally, like many other countries across the world, the rural vs. urban electorates in Malaysia are divided along party line. With a large number of rural electorates in the Eastern states of Sabah and Sarawak, securing the support of voters in Peninsular Malaysia was not sufficient for the opposition alliance, Pakatan Rakyat (PR) to secure electoral victory in GE13.

Against this backdrop, we seek to explain outcome of the recent Teluk Intan by-election in May 2014, where the PR candidate lost the seat to the BN by a small margin. Before turning to that, it is worth summarising recent scholarly findings on the election results.

This is not a comprehensive review of analyses on GE13 but it highlights and weighs relative importance of the key variables of interest. Tom Pepinsky of Cornell University has offered prompt analysis of the election results on his blog (link HERE) and the monkeycage blog (link HERE). He essentially argues that race is the best predictor of partisan votes. Electorates with large proportions of Malay voters tend to vote for the BN. Later, in response to criticisms and feedback from his earlier posts, he offered this qualification: “ethnicity is something like a ‘master variable’–this is not a technical term–in Malaysian politics. Not the master variable, but one master variable.”[i] This seems intuitive at first glance. After all, politics in Malaysia has always been divided along racial lines as evident in the way political parties are traditionally organised, and alliances are forged. But, is there more to the story?

Analysis by Kai Ostwald of University of California, San Diego, provides a different perspective. Figure 1 below, which is reproduced from his paper (link HERE), shows that BN seats tend to be smaller (in voter number) and of lower population density, compared to PR seats. Stated differently, BN generally does well in electorates that are more sparsely populated and with fewer people. The reverse is true for PR. BN seats populate the lower left-hand corner of the diagram; while PR seats are in the upper right-hand corner.

What he did not explicitly state is the way population density and district size correspond with the rural/urban variable. Urban electorates tend to be larger, and more densely populated than their rural counterparts. One point worth highlighting from the diagram below, as Ostwald has pointed out, is the large number of “marginal” seats in the middle, i.e. in between the scale of 5 and 7 in district population density, and around 50,000 in district size. 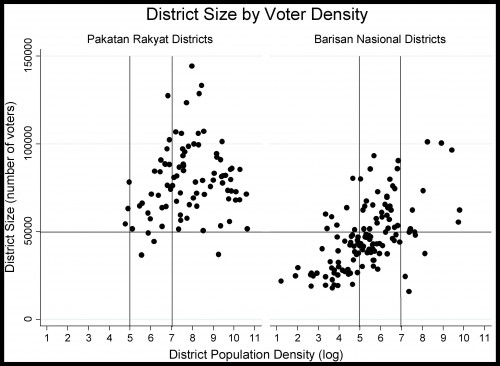 Taken together, the works of Pepinsky and Ostwald suggest that race, size of electorate, population density, and rural/urban divide, are potential determinants of election outcome. However, these factors overlap or co-vary. Rural seats that are smaller and less densely populated also tend to have more Malay voters, in comparison to urban seats. Therefore, can we state, with high degree of confidence, that it was the Malay–rather than rural–voters who supported the government? Or were they voters who reside in small and sparsely populated electorates? It is challenging to isolate one effect from another, though it is pertinent to disentangle them.

A recent paper by Jason Ng et al., of Monash University, Malaysia, takes an important step in the right direction. (link HERE) Their model takes into consideration both racial groups and urban/rural/semi-urban location, whereas previous studies look at only one or the other set of factors. The paper makes a few important points.

First, BN vote share in Peninsular Malaysia falls with proportional increases in urban voters, across all racial groups. The negative effect is the strongest among urban Chinese, followed by urban Indians and Malays, respectively. Second, increase in the proportion of rural Malay and rural Chinese voters have a positive, though relatively small effect, on BN vote share. Last but not least, ethnicity in semi-urban electorates has no statistically significant impact on BN performance.

This seems to conform to the observations by Professor Ed Aspinall (from the Australian National University) who was on the ground during the election campaign. As he has observed (link HERE), UMNO’s entrenched rural machinery has consistently generated sizeable returns. Given that urban voters tend to be more educated, and are more exposed to non-mainstream news sources made available with the advent of the Internet, it is logical that they tend to be supporters for the opposition.

What do these findings mean for the Teluk Intan by-election in May 2014 where PR lost the seat to BN’s Gerakan by 238 votes or 0.6 percent margin? Teluk Intan is a semi-urban electorate in the state of Perak with 60,439 registered voters; 42 percent of whom are Chinese, 38 percent and 19 percent are Malays and Indians, respectively. It has about equal proportion of Malay and Chinese voters, and sits somewhere in the middle along the rural vs. urban divide. Its electorate size in terms of number of voters is also about the nation’s average. (Average electorate size nationwide is 59,580.) This makes Teluk Intan a “marginal” seat in every sense of the word.

For marginal seats, idiosyncratic factors matter just as much as national policies. The PR candidate, Dayna Sofya’s relative lack of experience, her identity as an ‘outsider’ compared to the local-born Gerakan candidate, low voter turnout due to the absence of large number of out-of-town younger voters, government’s promises of goodies, including a ministerial position for successful election of the Gerakan candidate, are local factors that matter a great deal in a marginal seat.

More importantly, the loss of Teluk Intan provides the opposition with a valuable lesson. If degree of urbanisation of an electorate–rather than race–is the best predictor of election outcome, as scholarly work to-date has suggested, there will be more marginal seats like Teluk Intan in the years to come. Of the 165 electorates nationwide, the ratios of rural: semi-urban: urban are 49%: 27%: 24%, according to one estimate. With maturing of the economy over time, we would expect the country to become more urbanised. However, the rural seats will transition into semi-urban before becoming urban electorates. It is in this in-between phase that PR cannot take for granted support of the voters.