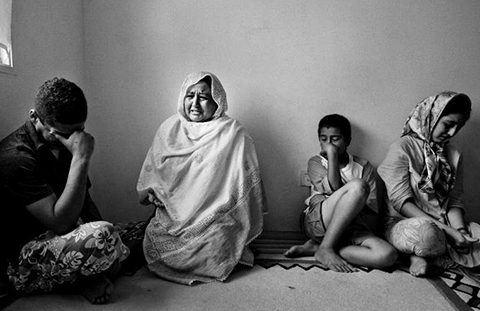 An Afghan family of refugees residing in Malaysia. Photo by UNHCR.

Aslam Abd Jalil – in the first of a three-part series – examines the issues faced by refugees in Malaysia and calls for the respect of human dignity.

The report by Al-Jazeera, Malaysia’s Unwanted, in November 2014 documenting the abuse and exploitation of refugees, has once again put the spotlight on Malaysia’s appalling treatment of this vulnerable group.

The United States’ World Refugee Survey for 2009 found that Malaysia was among the worst violators of refugee rights. Malaysia received an F grade in three aspects: refoulement/physical protection; detention/access to courts; and the right to earn a livelihood. It didn’t do much better on freedom of movement and residence, scoring a ‘must try harder’ D grade.

Malaysia’s role in regional and global governance is now sharply in focus as both ASEAN Chair for 2015, and as a serving member on the United Nations Security Council for 2015-2016. This provides even greater impetus for Malaysia to act responsibly as a member of the international community in relation to refugee issues.

This begins by fulfilling its own obligations to uphold the principles of human rights, congruent with the present administration’s wasatiyyah or “moderation” philosophy and its priorities to ensure the realisation of the ASEAN Community by 2015.

Simply put, Malaysia has an obligation to provide protection to every individual when they are on Malaysian soil.

However, this is something which the country is still failing to do.

According to the United Nations High Commissioner for Refugees (UNHCR), there are more than 150,000 refugees registered with the UN Refugee Agency in Malaysia. Out of these refugees, around 69 per cent are men, while 31 per cent are women. The registered include some 33,000 children.

Of those registered, more than 90 per cent come from Myanmar. The next largest group, some 2.6 per cent, come from Sri Lanka, with the rest coming from countries like Pakistan, Somalia, Syria, Iraq, Iran and Palestine.

But there’s more. The UNHCR also notes that as of December 2014, there were over 270,000 refugees, asylum seekers, stateless and other people of concern residing in Malaysia.

Currently, Malaysian authorities do not distinguish between refugees or asylum-seekers, and illegal migrants. Without the recognition of refugee status by the Malaysian government, asylum-seekers in Malaysia are constantly harassed, ill-treated and denied their fundamental rights.

There is a difference between asylum-seekers and migrants (legal or illegal). The conventional definition of refugees or asylum-seekers is people who flee from their home countries because of persecution. Those who seek refuge are considered asylum-seekers and they should be granted refugee status once their asylum claims are proven to be genuine.

A migrant chooses to leave their country to seek a better life and can return to their home countries should they choose too. Also, unlike internally displaced persons who seek refuge in safe areas within their own countries, refugees cross international borders to seek safety.

But as refugees are often from poor or developing countries, and seek refuge in more wealthy and stable nations, they are frequently viewed as illegal migrants seeking better employment opportunities.

Such is the case in Malaysia.

The fate of asylum-seekers and refugees in Malaysia is made more precarious because of their unofficial status. Under the Malaysian Immigration Act, severe punishment will be taken against any person who enters the country without valid documentation.

As a consequence, once in Malaysia these individuals are not only denied their rights but are also abused and exploited.

A 2010 report by Amnesty International found that 6,000 refugees in Malaysia are caned annually for immigration-related offences, including working, which is not legal for refugees. In addition to months of imprisonment, more than 47,000 individuals, including asylum-seekers and refugees, were whipped for immigration offences in Malaysia between 2002 and 2008.

Further abuse comes at the hands of various Malaysian government agencies, especially the Ikatan Relawan Rakyat (RELA or People’s Volunteer Corps). Crackdowns by RELA on “undocumented migrants” mean that asylum-seekers and refugees are vulnerable to arbitrary arrests, detention and persecution. Men in an immigration detention centre, Malaysia. Photo by AP.

There are also incidents where refugees who hold UNHCR cards or Persons of Concern letters are also arrested. These individuals (including infants, children and unaccompanied minors), are placed either at immigration detention centres (IDCs) or temporary holding cells and lock-ups in police stations.

Conditions at IDCs are deplorable. Often 200 people live in a room with one toilet, which is also the only source of water. Hygiene and sanitation is poor and there is little food.

Those who are placed in the cells and lock-ups in police stations, are also often denied access to justice and their treatment is clearly unequal before the law in Malaysia. The Immigration Act permits law enforcement agencies to hold non-citizens for up to 14 days (Malaysians can only be held for up to 24 hours), after which they have to be brought before a magistrate.

They cannot seek assistance because they are not permitted to make any phone calls during their 14 days in remand. If they are lucky, they will get assistance in terms of legal counsel or representation in court from UNHCR or NGOs – but only if these agencies intervene.

Most of the time however, asylum seekers do not understand the charges that they face and if they do understand, they do not have an adequate defence. This is because under the Immigration Act, irregular entry is an offence regardless of whether people are asylum-seekers or not. Abuse of the asylum-seekers and refugees is exacerbated with the incident of human trafficking perpetrated by Malaysian immigration officials.

As reported by the Migration Working Group and Northern Network for Migrants and Refugees, asylum-seekers and refugees are often handed over to human traffickers who set a ransom between 1,400 and 2,500 ringgit for their release and entry to Malaysia. If they are unable to pay, the men are sold as forced labour and the women are forced into a life as prostitutes in the brothels in Thailand.

This is clearly against the principle of non-refoulement where asylum-seekers and refugees are not to be returned to the place where they are at risk of being persecuted. Although Malaysia is not a signatory to the international refugee convention, it is bound to respect this principle as it is embedded in international law.

Then there are the mental health issues.

Asylum-seekers and refugees live in fear, which often leads to post-traumatic stress disorder and sometimes originates from the psychological trauma of experiencing and/or fleeing violence.

When Medecins Sans Frontieres (MSF) surveyed 100 refugees in Malaysia, 77 reported they felt constant fear and worry, 82 suffered sleepless nights and 69 had feelings of isolation. Meanwhile 56 people had experienced depression and 20had suicidal thoughts.

These problems stem from the difficulties associated with obtaining documents, the ongoing lack of security and very poor living conditions. In addition, 11 also claimed to be beaten by the police while 31 had had their belongings stolen.

It is also disappointing that 26 per cent of 248 incidents of violence against refugees reported in the MSF survey were committed by ordinary Malaysians. Asylum-seekers and refugees who are victims of such crimes are reluctant to lodge police reports because they fear being arrested.

It is time for Malaysia to start respecting human dignity.

It is completely inhumane to harass vulnerable asylum-seekers and refugees who have fled persecution. Their unofficial status makes them vulnerable to further abuse and exploitation. They are often arrested and locked into detention centres with deplorable conditions.

Their “illegal entry” prevents them from being able to defend themselves, and they are at risk of being sold off to human traffickers by corrupt officials. The constant abuses and human rights violations lead to serious mental health issues.

Malaysia has its own obligation to give protection to the refugees. Article 14 of the Universal Declaration of Human Rights, Article 16 of the ASEAN Human Rights Declaration, Article 22 of the Convention on the Rights of the Child (CRC) and the Convention on the Elimination of All Forms of Discrimination against Women (CEDAW) all require Malaysia to give protection to this group of people.

Denying their existence and refusing to address the issues faced by them will never solve the problem. After all the danger that they have been through, they should be protected and their worth as human beings upheld.

This article is the first in a three-part series, with the second and third articles to be published in coming days.