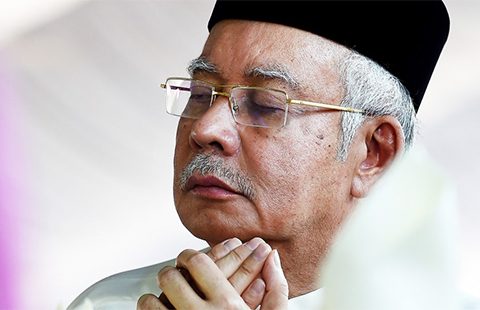 In preparations for the United Malays National Organization (UMNO) General Assembly next month, there are moves afoot to purge critics from the party. It had become apparent that Najib will do everything to stay in power.

Short-term Najib has increased his chances for political survival, but in the longer term he has weakened his political foundation by narrowing his base of political support and undermining the political fortunes of his own party.

The following examines several key features that distinguish Najib’s management of the 1MBD crisis from those of earlier premiers. Responses to the scandal suggest that Najib has weakened his leadership.

Past crises
Political crises in Malaysia are not new. The most damaging ones have arisen from within UMNO, the political party that has controlled national government since independence.

From 1969 to 1999, each crisis has seen challenges arising from declining leadership confidence, fierce personalised battles for position, selective arrests of critics, damage of political institutions including the judiciary and the police as well as rises in racial tensions.

Crises have often led to increased authoritarianism, as leaders use their control of the executive office and levers of power to contain challengers and rebuild support; 1MDB is no exception. The recent Human Rights Watch report on the attacks on critics details one of these features, as the past two years has witnessed broad use and interpretation of draconian laws to arrest and charge individuals critical of the Najib administration.

There are elements of the current 1MDB crisis that differentiate it from earlier crises. The 1MDB fund extends beyond Malaysian borders, involving extensive investments and investigations outside. It also involves record amounts of money that make earlier corruption allegations pale in comparison.

Malaysia’s economy is dependent on investment and 1MDB has severely negatively impacted these flows. Money from 1MDB also goes to the heart of political legitimacy in Malaysia as they are alleged to involve funding for the 2013 general election. Perhaps most different of all, is that the crisis involves Najib whose response to 1MDB has shaped its evolution. Here are five key differences in this regard and their implications.

Normalising scandal
More than any premier in Malaysia’s history, Najib has been dogged with scandal and political baggage. From Port Dickson meetings to Altantayu’s murder, his leadership has been clouded in allegations and innuendo.

The scandals extend to his family, especially his wife Rosmah Mansor, whose powerful unelected political role is unprecedented, and in some quarters deeply resented.

Unlike a Teflon phenomenon, where scandals have not scathed leadership, the opposite dynamic has emerged in Malaysia. In sponge-like fashion, Najib has absorbed the scandals, reducing their shock and dampening their toxic effects.

Scandals have become so common place in Malaysia that they have lost the impact to remove leaders from office – at least for now.

Shattering leadership confidence
These scandals have left a serious imprint on the political landscape. Malaysia has long been known for its feudal politics, with leaders followed and respected. Over time, challenging leaders has become more common, with the 1999 scandal involving Dr Mahathir Mohamad a watershed in this regard.

Najib’s leadership has broken records in eroding public views of national leaders. His move from the 1Malaysia to 1MDB brand has taken a premier who failed to win a majority of the electorate in 2013 to the low of less than a third of public support.

Not only does the premier have the lowest popular support on record in public polling, large shares of Malaysians are ashamed of their leader with some expressing ridicule and hatred. The initiatives to go after senior UMNO leaders, will only narrow Najib’s base further as the foundation of his support remains largely die-hard UMNO members.

While Najib’s fall in confidence spills over into governance and government, it also leaves an imprint on Malaysian politics as a whole in that it undercuts faith in the overall political system.

In Najib’s case he has been building the power of his office since he assumed office, raising the budget allocations to RM20.6 billion in the 2016 budget (equivalent of 7.6 per cent of the entire budget), increasing its decision-making power and broadening oversight.

One area where Najib’s powers have expanded is in the control of government-linked companies and bodies by using personal loyalists as appointees, such as 1MDB. Najib relies on his office to a greater extent than any other leader.

To date, the 1MDB scandal has negatively affected the parliament, judiciary and attorney general’s office, the police force, Bank Negara (Malaysia’s central bank), anti-corruption bodies, government-linked bodies and more. Najib has yet to respond to the call by the rulers for resolution of the 1MDB scandal.

What distinguishes Najib’s relations with political institutions is that they have been seen to be in his interest rather than serving the country. More than any premier – including Tun Mahathir – Najib is seen to be undermining institutions for his own personal survival. Scant attention is being paid to the damaging precedents that are being set and how they will affect governance in the future.

The BN has been dying a slow death since the 2008 elections, when the non-Malay component parties failed to deliver their ethnic communities for the incumbent coalition. Non-Malay component parties have lost credibility, and autonomy of their own political decisions. The strongest coalition members are in Sabah and Sarawak, states that provide the needed numbers for UMNO to stay in office, and these allies have demanded more for their loyalties.

During 1MDB, Najib has illustrated how weak the non-Malay component parties are. A pivotal moment in this regard was the dismissal of their concerns over the racialised Malay chauvinist red shirt rally in September.

Najib has even opted to sue the former president of the Malaysian Chinese Association Ling Liong Sik for defamation, while failing to take similar action toward international dailies over the scandal. These actions only serve to illustrate how ineffective the coalition is at inclusive representation and will further erode its support base.

Traditionally, party members are sacked and made ‘outsiders’ before they are targeted. This has not been the case with 1MDB, as divisive lines have hardened within the party toward ‘critics’. Najib has also widened the gap between the party elite and its grassroots.

To manage 1MDB he has used patronage directed toward the 500 elites in the party, notably division chiefs, party office holders and elected representatives. This has showcased the hierarchy of benefits in UMNO. Little has gone down to the base of the party itself, creating resentment and anger.

At the same time there has been minimal direct accountability to members. Najib’s style has been to use others to manage the UMNO grassroots. These dynamics have come at a time when the party’s reputation remains low, and it is not in a position to win power without a broadly popular leader.

This will have serious implications for the party as it moves toward the next elections.

Deepening divide and rule
Traditionally, there has been a pattern in responses to political crises. Initially leaders rely on race to shore up support in UMNO and to instill fear to strengthen their position. Then leaders reach out across divides through policy initiatives and dialogue to broaden their base.

In 1MDB, this pattern had taken on a different trajectory in that division has predominated over inclusion. Najib has grown more reliant on mobilising race and religion to stay in power since 2013, as evident in the rhetoric and policy.

With 1MDB this came to the fore with the red shirt rally, but it is also evident in the expansion of affirmative action policies and programs. Najib has also widened the divide over those who benefit from his government, with ordinary people paying a much higher price for governance failings in the past, through GST, higher tolls, transportation costs and subsidy reductions. The BR1M cash transfers do not offset the costs being imposed. These costs would have been reduced with more accountable governance and concerted efforts to reduce graft and corruption.

The 2016 budget extends the pattern of unevenness in policies, with its targeting of benefits to key constituency groups rather than fostering broad and inclusive national economic growth. Najib has opted to rely on division to stay in power, with little regard to how race, religious, class and other cleavages are tearing at the national fabric.

As Najib remains in office during the 1MDB scandal, he is being called Malaysia’s new ‘strongman.’ Some even go on to predict he will stay in office longer than the 22-year tenure of Tun Mahathir. Study of the measures he is taking to stay in power point to a different picture.

The damage being caused by 1MDB and the responses to the crisis will have an impact on the political terrain. Najib remains much weaker than he has even been, and his responses have undermined rather than strengthened his leadership, making national outreach and inclusive governance unviable if not impossible.