Given the continued chatter on social media about the tragic attack by a gunman at Resorts World Casino on 2 June, it is worthwhile to begin this piece by debunking the notion that it might be connected to Islamic State. Granted, ISIS tried to immediately claim that this was one of their ‘lone wolf’ attacks, but that was clearly not the case. Closed-circuit TV cameras tracked the gunman, 42 year old Jessie Carlos, from the moment he alighted from the cab and wrought havoc and panic by shooting into the air and setting fires, killing 37 employees and guests, most of whom died from smoke inhalation. Along the way, he grabbed casino chips and stuffed them into his bag, eventually committing suicide in solitude. What was immediately clear was that none of his behaviors resembled those of extremist terrorists.

Despite the event’s lack of connection to Islamic State, Philippine House of Representatives Speaker Pantaleon Alvarez insisted that it be labeled ‘terrorism’. Such hype has created scepticism about the importance of the events in Mindanao, and has led some to wonder if this was just a plot to promote an ISIS scare, possibly to justify the extension of Martial Law (currently in place for 60 days over the entire Mindanao island region). While one might not blame opponents of President Duterte for their suspicions, it is important that we not get distracted from or diminish the importance of the alarming conflict currently unfolding in the Islamic City of Marawi.

The clash in Marawi will at some point be over—the extremist insurgents will be expelled, security forces and civilian government officials will exert control, and displaced residents will return to a city whose center has been devastated. The aftereffects will be lasting—this is a ‘game changer’, in the words of analyst Sidney Jones.

Just the physical rebuilding and infrastructure recovery will be difficult—even harder than the rehabilitation of Zamboanga City was after the September 2013 siege that burned five urban poor villages to the ground. Internally displaced persons from that attack are still, more than three years later, being moved back into housing in those villages. Today, in Marawi, the bulk of the fighting is taking place in built-up areas, within commercial buildings and substantial concrete residences—one of the reasons the expulsion of the extremists is taking so long. The Philippine military is using bombs and high explosives against the occupied structures, causing widespread destruction.

One notable difference from the 2013 situation in Zamboanga City is that the vast majority of internally displaced persons are ‘home-based’ with relatives and friends—only 5% are housed in hastily constructed camps. The relevant relief agencies from the national government, the Autonomous Region in Muslim Mindanao (ARMM), civil society organisations, and the international community are mobilising to provide support to both home-based and camp-based families, so the temporary situation is not as bad as it could be. Both the national government and the ARMM have begun talks about rehabilitation plans, but of course while fighting continues, an assessment, much less planning, is not possible.

Unfortunately, we can safely predict that one outcome of this episode is a continuing, perhaps metastasising, problem with violent extremism, for at least three reasons. First, in Mindanao at least, one of the most fertile sources of recruitment is among those who have lost relatives in fighting—children of ‘martyrs’ or other surviving family members. This clan organisation of conflict is often reflected in persistent clan feuding, known as rido, but has been exploited by violent extremist groups. Since it is likely that many relatives joined the fighting despite not having previously been members of extremist groups, the recruiting pool has rapidly expanded.

Second, the demonstration of military prowess by these groups linked to Islamic State will undoubtedly inspire those who are susceptible to recruitment. French analyst Olivier Roy has spoken of the ‘Islamisation of radicalism’—by which he means that those influenced by generational revolt or opposition to dominant societal paradigms are now more likely to generate narratives from their understanding of Islam. Thus earlier generations might have adopted a Marxist ideology (as in the Communist Party of the Philippines) or ethno-nationalism (as in the Moro National Liberation Front). Now the Islamic State has provided a compelling vision of a worldwide caliphate as a possible ideology. It is important to note in this connection that deep Islamic knowledge, or even adherence to a fundamentalist interpretation of Islam, should not be seen as the motivating factor—witness the purchase of the book Islam for Dummies by new recruits.

The third reason is that this incident reinforces the call that the Islamic State made in a video featuring an Indonesian, a Malaysian, and a Filipino, posted in June 2016, that extremists who couldn’t get to Syria or Iraq could go to Mindanao. Islamic State had anointed Isnilon Hapilon as emir for the region, and it was the attempt to arrest him in Marawi on May 23 that triggered the current fighting. Seizing and holding territory is what propelled Islamic State into the limelight in 2014, and this has certainly been accomplished in Marawi City. Many sources attest to the presence (and death) in Marawi of combatants from outside the Philippines, and the current battle is certain to attract more to try to cross the borders.

Clearly, this is a multifaceted problem with deep roots going back decades. Thus, we must think beyond just action by the security forces to a broader agenda.

Failures of governance in conflict-affected areas of the ARMM contribute to disillusion with formal systems for social services and security provision. Certainly the illegal economy is a problem— the focus is often kidnap for ransom, particularly since foreigners tend to be brought to Sulu for ransom, or occasionally execution. President Duterte has repeatedly mentioned drugs in this context, though sometimes he clearly paints with too broad a brush (claiming, for instance, the Maute brothers at the core of the clash were former Manila policemen in the drug trade when clearly they were not). Local government officials need to be held accountable for the persistence of illegal activities in their jurisdictions.

In general, more law enforcement—and more professional law enforcement—is needed. Malaysia, Indonesia, and the Philippines have stepped up naval patrol cooperation in the Sulu-Celebes sea, in the area being labeled ‘Southeast Asia’s Somalia’. This is useful in the face of the seaborne piracy that has led to the kidnapping in this area of many seafarers, but it is not the only route foreign fighters might use to join violent extremists. Many enter through regularly scheduled flights, and so immigration enforcement must be improved, but this flies in the face of a months-long dispute over pay for immigration officers that has resulted in severe manpower shortages.

While some argue that the actions of IS-Ranao and the Maute brothers, or the Abu Sayyaf faction headed by Isnilon Hapilon, are motivated by money or political rivalries, the radical ideology supporting Islamic State is clearly at the core of their ideology. As long ago as 2008, the Abu Sayyaf in Basilan sent a letter threatening Christians: ‘The Quran provides that non-Muslims who stay in Muslim areas should convert or pay jizya (Islamic tax) and failing to do so would mean armed struggle.’ In Marawi, the extremists burned a Shi’a mosque, and posted a video of the trashing and then burning of a Catholic Church. In this way, Islam provides ‘an emotional vehicle’ (in Scott Atran’s words) for their extremist actions.

Thus, we ought not target Islam as the ’cause’ of extremism—a point eloquently demonstrated in Marawi City when devout members of the Tabligh who had gathered there helped rescue Christians trapped in the fighting. However, often recruitment into such violent extremist groups begins with an offer to provide education into Islam—and ‘grooming’ can then take place via social media or in person. Local Muslim communities have for some years recognised the threat. Fortunately, some Muslims themselves are eager to confront the readings of Islam propagated by violent extremists—and ulama are organising themselves, with statements that terrorism is haram (forbidden/unlawful).

In addition to this explication of why the ideology of Islamic State does not comport with the consensus of scholars, other efforts try to trace the pathways of individual radicalisation. In the poorer areas of the Sulu archipelago, the appeal of such groups, particularly among vulnerable youth, comes from economic struggles and the search for a better livelihood. In a city like Marawi, where recruitment can happen on college campuses or at the workplace, social networks and peer-to-peer efforts might make more of an impact than messages from formally respected elders.

In the end, communities must be encouraged to be more resilient if they are to counter violent extremism. Better access to employment, disaster preparation, social networking, and education would all provide alternatives to potentially vulnerable individuals. We must understand pathways to recruitment and the personal issues involved, and not allow preconceived notions (e.g, considering only male-dominated networks, rather than understanding the role women can play in this dynamic) to dominate our thinking.

Above all, the low-hanging fruit—full implementation of agreements reached in 1996 with the Moro National Liberation Front and in 2014 with the Moro Islamic Liberation Front—must be picked. The narrative of the Moro in the Philippines is not the same as the narrative of the worldwide caliphate, and the former narrative could be very productive for lives and futures in Mindanao and the entire Philippines. As so many have stressed recently, vigorous progress on this front is the best political argument against violent extremism.

This post is published in conjunction with InAsia, a blog of regular analysis and insight hosted by the Asia Foundation.

Dr Steven Rood is a Distinguished Visitor at the Department of Political and Social Change in the Australian National University’s Coral Bell School of Asia Pacific Affairs and The Asia Foundation’s former country representative in the Philippines. He tweets at @StevenRoodPH. The views and opinions expressed here are those of the author and not those of The Asia Foundation or its funders.

Header image: This recent photo published on MindaNews was captioned “No, this is not Aleppo.” Ongoing clashes have left the city in destruction. Photo/Dr. Saffrullah Dipatuan courtesy of BANGSAMORO NEWS

NM contributors on the Marawi crisis 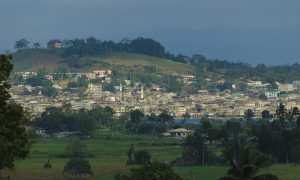 Marawi after the fighting stops

Securing military 'victory' against the Maute Group would only be the start of dealing with lingering grievances and mistrust that undermine peace-building. 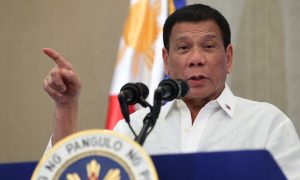 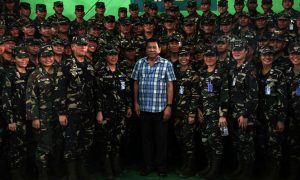 The security rationale for Duterte’s declaration of martial law may apply in Mindanao. But is it a test balloon for further authoritarian measures?