New Mandala readers may be interested in video I have made of the festival of Mien Sports and Heritage, Thailand 2001. (Click on the image below.) 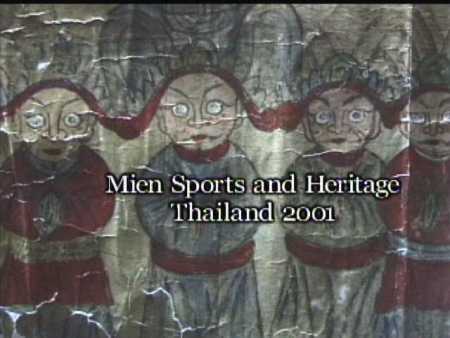 The video is from a festival organized by Thailand’s Iu Mien Association, Samakhom Iu Mien Haeng Prathaet Thai, and held in the village of Pang Khwai, amphoe Fang, Chiangmai Province, in March 2001. It is as much about Thailand in 2001 as it is about national integration, sports, culture, highland ethnic minorities, and Mien (chao khao phao Yao). I went to Thailand specifically to see the fair, having learned of it the year before, and the video footage happened for a lucky coincidence. I hope the video can stand on its own. I tried the best I could to make the video not be a reflection of an article that I wrote on this same fair. Camera and editing are by the pseudonymous Karl Coogan, who is working on a very different film project now.

The event – held at a school and with Thai schoolteachers as referees – was in many ways a ritual of allegiance to the Thai nation and state, but it was also about matters within Mien social relations. The Mien Association, formed in 1992-1993, facilitates the bureaucratic reification of ethnicity as consisting of song and dance. So far, the association’s leadership has been male, and women have been relegated to preparing and serving food at festivals, through the activation of Village Housewives’ Groups. Individual villages rise to prominence with this festival – Pang Khwai, the host village, pulled off an event that was beyond the financial means of any other Mien community, and the culture shows were all from Pangkha, the home village of the Mien Association’s president. But the Mien Association also carries the promise of an official body to represent farmers vis-├а-vis the authorities (evictions still happen, and the Mien Association has made a difference).

The road-signs by the host village still refer to it as Pang Khwai (“Buffalo Pen”). But in the sports program only the new village-name was used; Jao Mae Luang. Jao Mae Luang is a reference to H.R.H. The Princess Mother, the late mother of the current Thai king, who was actively involved in hill tribe development, particularly on nearby Doi Tung Mountain in Chiangrai Province. During the sports contests, fans on the sidelines chanted “Jao Mae” with enthusiasm, no one chanted “Pang Khwai.” The event’s Program was also about relations to the state. The organizers had a permit from the Amphoe Fang authorities, and the program included the Garuda insignia of the state. We were on official ground.

At a meeting of the Mien Association’s leadership, the president suggested that Mien have a greeting, and his suggestion was that one do the Thai greeting (wai, with hands clasped together) and the farang (Westerner) handshake, but saying a Mien phrase with each gesture; peng awn (“peace”) with the Thai wai-gesture and yiem long nye sa? (“how are you?”) with the handshake. He called for a vote on the issue, and it was approved. The issue of a “Mien greeting” is a good example of the reworking of local culture through national and international contexts, where Mien are viewed in terms of Thai and western customs and proposed changes in Mien culture modeled explicitly on these other cultures. An additional dimension to the issue is the general, Thai sense that “hill tribes” have no manners. During the nighttimes shows of culture, a banner declared in Thai, Suebsan Watthanatham Thai-Yao, “carry on the culture of Thai-Yao,” which to me indicated that both Mien people and their culture were being defined in Thai terms by the fair’s organizers.

I made the video in part as a form of protest against the prevalent depiction of upland ethnic minorities as exotics whose real identity and value were confined to what outsiders consider traditional culture, the stuff captured in coffee table books, collections, National Geographic-style documentaries and the like. My problem is not with Mien efforts to preserve their culture, but the “tribal consensus” of outsiders ignoring the contemporary stuff of pleasure, festivals, and organizing among marginalized peoples in relation to the immediate context of nation states, globalization, and various matters of livelihood. So I tried to convey this stuff without being in a lecturing mode to the viewers.

One of the sports played (for fun and not prizes) at the festival in Pang Khwai was a form of eggplant-dildo-golf. This is good distraction and risqué at the same time; boys/men had a great time with it while girls/women were visibly uncomfortable. I am told by a Thai student that this game is known to have been imposed on incoming students at Chulalongkorn University to break them in. My student added that Chula was conservative, and that nothing of this sort had taken place at the more liberal and open minded Thammasat University. The festival is now an annual thing, and the sports change from year to year as the event goes among the better off Mien villages in the north. Lately, organizers have been able to get support from the Subdistrict Administrative Council, as this is about the preservation of local culture.

I did not have any training in video-making before doing this. The film is an attempt to convey a complex reality and I must say that I felt like I really lost control over the process as I worked with the material and my collaborator. That may be the only way to go, to abandon any attempt to impose too much of my own views on the material.