Ministers at the Arunachal Pradesh Manau

This small selection of images highlights the role of two Arunachal Pradesh government ministers at the recent Singpho Manau festival held in northeast India. The ministers flew in by helicopter and were driven to the festival (via the local circuit house) in a convoy of substantial four-wheel drives. 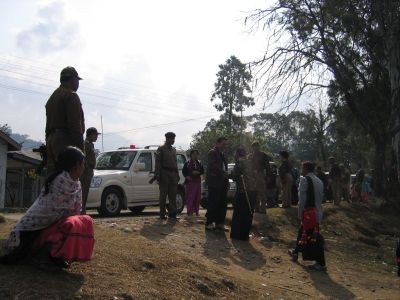 – The ministers arrive on the morning of the first major day of the festival. – The ministers take their place in the middle of the stage. – Minister Chowna Mein, who was honoured as the “chief guest” of the festival, gives his speech. The Chief Minister of Arunachal Pradesh was invited but could not attend so Chowna Mein, a senior minister in his own right, stepped into his shoes. In his speech he ranged across topics from the patriotism of people in Arunachal Pradesh (“We Arunachalis are more patriotic than other Indians”) to the etymology of place names along the India-Burma border. The other minister, C.C. Singpho, is reading a copy of The Miao Times, the local newspaper. This informative paper is published in English and the Editor-in-Chief is a local Singpho intellectual. 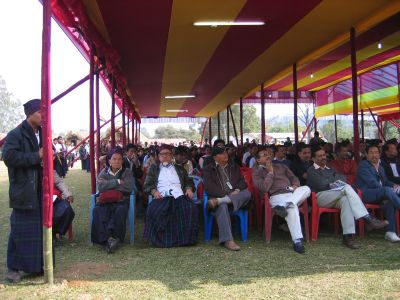 – The crowd listens intently. Singpho chiefs and some journalists (mostly from Assam) make up the front row. – The technical team keep the volume just right. At the end of his speech Chowna Mein donated 100,000 rupees to the festival organisers. – After all of the speeches are finished, Chowna Mein prepares to cut the ribbon declaring the festival formally open. 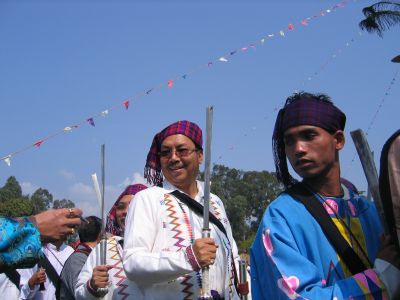 – Then the dancing begins. After a stint observing the dances from a viewing platform, Chowna Mein leads the dancing around the Manau poles. He is the state government minister responsible for the Rural Works Department and Rural Development (usually reduced to “RWD & RD” in local shorthand). Some readers may also be interested to know that he is Tai Khamti. 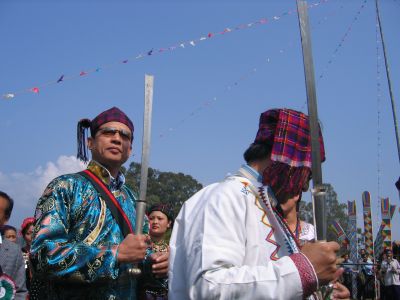 – C.C. Singpho, who I understand is currently the most senior, elected Singpho leader in India, also takes part in the dance. He is the Arunachal Pradesh Government’s Minister for Civil Supplies and Consumer Affairs, Health and Family Welfare. In material on this particular Manau festival he is often described as the “chief patron”. 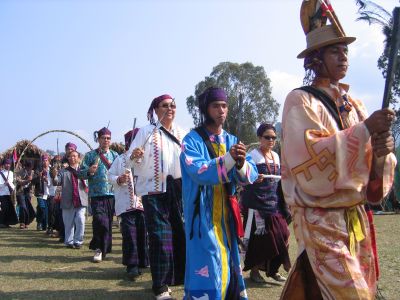 – The ministers leading the dance as it swerves back towards the Manau poles one last time. – After dancing, C.C. Singpho is interviewed at some considerable length by an Assamese journalist. 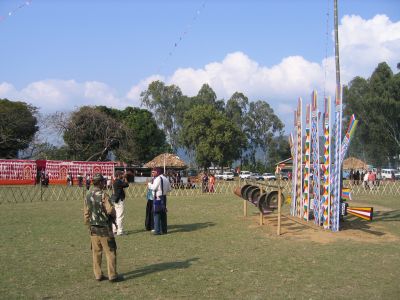 – One of C.C. Singpho’s bodyguards stands at the ready. Everyone else has already gone for lunch! A short-time after this photo was taken the ministers departed the festival ground. The local heli-pad is not that far away.