More on the garlic roller coaster

Last week I wrote about the relatively long-term fluctuations in the price of garlic. In response to a couple of the comments I have re-calculated the graph using prices adjusted for CPI (with 1984 prices as the base). I am not sure if I have used the best CPI figures available – I used a set that is attributed to the IMF. Once again, I have marked the agricultural trade agreement between Thailand and China with an arrow.

A few comments on the CPI-adjusted graph.

I have also received the following comments from Benchaphun Ekasing of Chiang Mai University:

I would like to show you the graph and figures on production and import of garlic 2001-2006 (see below) I have in my file. Production data were from the Office of Agricultural Economics and import data were from the Thai Customs Department. Garlic imports, mainly (90%) from China were reduced from 47.8 thousand ton in 2005 to 28.99 thousand ton in 2006. This was coupled by a fall in domestic production which was reduced from 107 thousand ton in 2005 to 81 thousand ton in 2006. Some 45 thousand ton or nearly a third of use was absent in 2006 explaining price hike. Since 2003, garlic imports have constituted about a third of total use in Thailand, while imports were negligible before 2001. The fluctuation in imports since 2003, in my opinion, explains much of the garlic price variations – so I am not convinced about your theory of garlic roller coaster, at least since 2002-3 because things have not been the same for garlic since the 2003 Thai-Chinese FTA. I nevertheless don’t know why in 2006 there was a reduction in garlic imports from China when domestic production was also reduced through government policies. 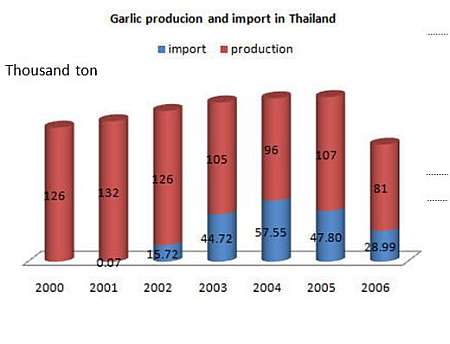 Thanks very much Benchaphun! Does anyone have any thoughts on why imports dropped so much in 2006?