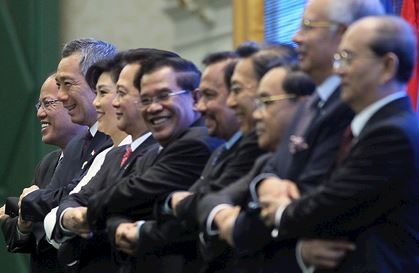 When the architect of the transformation in Myanmar, President Thein Sein, visited Chatham House in London in July 2013, his central message was that Myanmar wished to stand on its ‘own feet’. Two main tasks lay before Myanmar at that point: the 2014 chairmanship of the Association of Southeast Asian Nations (ASEAN) and the 2015 presidential elections. The present commentary elaborates on the European Union’s angle, and more specifically on the lessons that the EU offers for Myanmar’s ASEAN chairmanship, while also clarifying EU views on the 2015 elections. While commentaries on Myanmar are concerned with the government’s lack of protection of human rights, the present review examines ‘unity’ within ASEAN as the value that the Myanmar chairmanship can contribute towards development. Also, it argues that in order for the process of the ‘reform towards democracy’ to continue, the government must show that it has granted ‘space’ to civil society in which to develop political pluralism, for which amendments to the Constitution are definitely required. The whole will be put to the test during the 2015 elections.

What can Myanmar’s chairmanship learn from the European Union members’ divided position on external affairs, such as the deep, public disagreements associated with the Iraq war, the incapacity to produce collective action during the EU’s reaction to the 2011 Libyan crisis, and again the unwillingness to share a common initiative in response to the more recent developments in Mali? It is a discouraging question, particularly in the light of the EU High Representative’s apparent obsession with the ‘reality of 27 member states who are sovereign, who believe passionately in their right to determine what they do’, as Ashton argued in 2011. As disagreements within the European Union have seriously damaged the relations among the member states as well as the political development of the EU as a whole, a major message from a European view lies in the conviction that divisions weaken any project of integration and the attempt to create a united community, which ASEAN plans to achieve by 2015.

The fact that Yangon endorsed the chairmanship under the label ‘Moving Forward in Unity towards a Peaceful and Prosperous Community’ appears to promise that the crucial argument of unity within ASEAN is on Myanmar’s implementation agenda. Though the Europeans find China’s behaviour regarding the disputed areas in the South China Sea somehow questionable, scholars from ISEAS in Singapore, when questioned in February 2014 on this issue, argued that it is not a central matter to be ‘concerned with’, based on the expectations regarding Myanmar’s conduct of the Association.

As seen from Europe, containing and controlling Beijing’s behaviour interacts with ASEAN’s major shortcoming: specifically, its lack of political unity. Myanmar’s chairmanship could contribute towards generating some sense of regional identity and community beyond governments. The security scenario has witnessed recurrent and even increasing tension. It was relatively recently that Cambodia’s Presidency of the Association concluded with a meeting that failed to deliver a joint declaration (2012), an event that has been noted in the EU as one that never arose during ASEAN’s 45-year-long history.

The merit of a joint statement lies in the resources that the EU respects and that, disappointingly, too often disregards: specifically transparency and commitment. That is to say, the joint statement was intended to demonstrate the transparency of the Association’s approach to the problems impinging on it, its fitness for decision-making and the extent of its political strength. As the EU did not possess these qualities when it opted for divisions, ASEAN also revealed these limitations particularly its lack of cohesion regarding common solutions and, ultimately, integration. A declaration would have warned the government in China that alleged territorial prerogatives should be resolved diplomatically, and would have stressed ASEAN’s advantageous position for achieving consultation and a resolution to the matter.

The lesson that the Union offers for Myanmar’s ASEAN chairmanship points towards engaging it to impact on the Association by building up ASEAN’s regional identity. Seizing this opportunity, the chairmanship should try to promote intra-regional interactions in response to the external claims of China. This would compel ASEAN to place itself centrally in the ‘boundary tracing’ of its real approach to the stability of the South China Sea area. The whole of this process will develop, provided that ‘unity’ within the Association is regarded as a value that Myanmar’s leadership is willing to strengthen.

The other main responsibility that falls within Myanmar’s agenda, if it wishes to stand on its own two feet, is the 2015 presidential election showing that the process of reform towards democracy is continuing.

The range of criteria for defining the reform towards democracy is complex, and elections are just one element of this process. There are several stages that might be encouraged, the most obvious being some form of political pluralism which becomes possible through the involvement of civil society. For civil society organisations to propagate and have an impact on democratic growth, there would need to be a close interplay among them and interaction with the government. On the European side, the EU has recognized that ‘the period leading to general elections in 2015 is critical for the overall transition’ and declared its belief that ‘building a functioning democracy’ is a primary task. It trusts and supports the growth of a ‘very dynamic and diverse civil society in Myanmar’, as well as encourages the government to reach out and sustain interactions with civil society.

Also, for civil society to contribute to the developing political pluralism, ‘space’ should be both permitted and assigned by the Constitution in Parliament. The European Council welcomed the formation of the Constitution Review Joint Committee, urged the government to continue the constitutional and electoral reforms and expressed a wish for an ‘inclusive review’ process that would bring the Constitution into line with the requirements of a modern democracy. Suu Kyi argued that no further substantial advancement can be obtained with regard to democratic reform unless the Constitution is amended (including the abrogation of Article 59(f)). The President himself has stated that he trusts that ‘a healthy Constitution’ must be revised from time to time in order to adapt to the ‘needs of our society’.

All-inclusive 2015 elections and a shift in the Constitution are two points of the same argument in EU circles. The discourse that ‘it would be completely wrong for elections to be held under a Constitution that really excludes one person’ is the position of Great Britain. Also, the Prime Minister of Italy pronounced his unequivocal support for Burma’s constitutional reforms and, more recently, in 2014, Germany has been more explicit than other EU member states in publicly declaring its willingness to provide assistance in the sphere of constitutional reform, using its own experience as a federal state. According to its President, Germany believes that the federal form of statehood ‘makes unity in diversity possible’. The latter was an even more comprehensive concept expressed concerning the 2015 elections.

What are the European expectations? There are various sceptical voices, in some circles, concerning the results of the Constitutional Review Joint Committee. First, the Committee’s report of late January 2014 was neither a binding nor a formal recommendation. Second, President Sein’s recent speeches made it clear that the constitutional reform will not be a short process and that, most significantly, the military shall continue to play, for some time yet, a role in national politics – which the present Constitution has defined. Third, a further argument contends that there will be no serious change made to the Constitution during the first five-year term of Parliament, and that a more likely transformation can be expected after the 2015 elections, during the Parliament’s second term.

Notwithstanding these difficulties and skepticisms, it is also true that President Sein, in February, publicly insisted that those responsible for the constitutional revision should not overlook the outcome of the dialogue with civil society. The President envisaged the construction of a ‘new political setting’ which he characterized as one ‘that the entire society has longed for’. Whether Myanmar will be able to demonstrate that the process of reform towards democracy is continuing remains in question. If it wishes to do so, the Europeans will expect the government to make it apparent that it has not abandoned the road to a wider consensus towards transformation. The extent to which this proves to be the case will be tested by civilian society, and a close, meaningful test will be the 2015 elections.

Dr Ludovica Marchi is a political scientist and academic researcher on the EU’s External Relations. She has been teaching assistant at the University of Cambridge, Department of Geography.