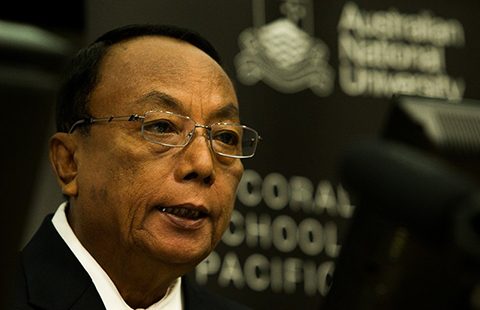 Future lies in reconciling the present with the past In this exclusive to New Mandala, HE U Khin Myint Aung, Speaker of the Upper House, Myanmar Parliament, outlines the path for political reform in his home nation.

As a Myanmar citizen I am deeply satisfied with international interest into what some Western media have called “the Myanmar Spring” – which is our democratic transformation.

If we analyse the civil war we will see two root causes. These were the ideological root and the ‘ethnic’ root. Because we could not find a political solution to these two roots we slid over the brink into civil war. As the flow of world politics has changed the danger of the ideological problem has receded, but the ethnic problem is still a sensitive one to this very day.

In 1962 the Tatmadaw took over the nation’s responsibilities and turned its back on parliamentary democracy and moved in the direction of socialism. In the beginning it had some successes and popular support, but in the long run it moved towards a worse outcome. The worst result was that the Tatmadaw, born of the people and trusted by them, now began to see the trust between itself and the people erode.

As such, I believe that there are two fundamental issues in Myanmar politics which still have not yet been resolved. First, is the issue between the central government and ethnic minorities. This conflict is now in its 65th year.

Second, is the relationship between the people and various successive governments. All governments of Myanmar since 1962 have been, in one way or another, influenced by the military. This conflict is now in its 53rd year.

The first issue caused Myanmar’s civil war. As long as this issue persists, it will be extremely difficult to end the civil war. The other issue is the result of long-term ruling of military-linked government, and it is the core of our democratic cause.

Still, both these issues are issues between brothers of the same blood, and therefore are not deadly enmities. They are issues which can be resolved by friendly persuasion. But since these issues are long-festering ones, we cannot expect them to be solved quickly. We need time, and patience.

In solving these two issues there are also some unavoidable background historical legacies. Because these have become entrenched from our long history, we may also call them ‘political culture’. These include an obsession with norms, which weakens pragmatism.

There is also an obsession with radicalism. Myanmar politics has a tendency to radical solutions that would like to uproot everything and a strong fascination with militant politics. We must solve this tendency through negotiation and slowly change this attitude. This can be an obstacle to Myanmar’s democratic cause.

There’s also an obsession with faction, and when we need national unity, overcoming this obsession is also a challenge. Finally there is a worship of personality and this desire for a ‘political saviour’ is an obstacle for the institutionalisation of democracy.

The first attempt at creating the democratic transformation that we see today in Myanmar was the 1988 democracy upheaval. To be honest, even then the government in power – the Burma Socialist Program Party – knew it had to change in accordance with the trends of the times. However it appeared that they were thinking of economic reforms first and political reforms later. The people’s patience could not last that long.

The military government tried to practically implement economic reforms, especially in the building of basic economic infrastructure. But because of the international economic blockade, the results did not match the efforts.

This time around, a hasty political-transition was not attempted. Taking a note of deep caution from the events of 1988, time was taken to create a gentle and smooth transition. And in this way we held multi-party democratic elections in 2010. We may call this the second attempt at democratic transformation.

The distinguishing mark of this type of transition is that it was unlike other types of democratic transition. It was not a transformation boiling up from street protests, but one which the government itself began the task of opening up.

Unlike the 1988 “bottom-up” transformation, this was a “top-down” transformation. Preparations were made in advance to deal with the adverse effects of change which would appear as soon as the opening for that change took place. The 2008 Constitution was designed as such. Those who drew up that Constitution designed it so that it could create a transition which all political forces in the country, including the Tatmadaw, could follow and agree to.

The government has had to struggle with not just one but three reforms, any one of which would need a tremendous effort to successfully carry out. These are the political and economic reforms, and the peace process.

Of the three reforms the one which has had the highest acceptance both internally and internationally, and which has the greatest momentum, is political reform. This was begun under the slogan of ‘National Reconciliation’.

The aim of economic reform was to change from a closed, command-style economy towards an open-door, free-market economy. This aim was not as successfully achieved as that of political reform. But some important achievements were made.

The aim of the peace process is achieving internal peace and national reconciliation from the current situation of national disunity and civil war. This aim, as with the aim of political reform, is being carried out at an accelerating pace. In a very short period of time we have managed to achieve ceasefire agreements with 11 armed ethnic groups. Only one main ethnic group, the Kachin Independence Army, remains.

However, even while we were trying to achieve the goal of a national ceasefire, the number of armed groups actually increased instead of decreased. The government’s Peace Committee is patiently negotiating a National Ceasefire Accord with the National Ceasefire Coordinating Team which includes 16 armed ethnic groups.

Now there are only a few months left of the five-year Myanmar democratic reform. At this point we can look at the Arab Spring which happened at about the same time as our reform, and see chaos and a situation full of sorrows. If we compare ourselves to those countries we can find much to console ourselves with. I would like to say that ensuring and guiding the situation so that the Myanmar Spring does not reverse itself, and bog down into chaos, is in itself an achievement of no small magnitude.

If we can cap this with a free and fair election we will have done our historical duty in our first five-year term. This is not to say that we have won a complete and full victory. The two fundamental issues that I have mentioned before are still not resolved. The fact that these two deeply rooted diseases of over half a century’s duration cannot be resolved in only five years is natural.

In order to achieve this, I argue that we need to carry out three bold steps. They are: to hold a free and fair election by the end of 2015 at the latest; to have stability before and after the elections; and

to have a smooth and orderly transfer of power to the New Parliament and Government after the elections.

As for ourselves, we are ready to join hands with whichever party or organisation which has won the election to strive for the future of Myanmar’s democratic transformation. This change will be more complicated and subtle than anticipated, and can take longer than expected. It will be one which will not succeed at once, and one which will gradually be implemented step-by-step.

The President of Myanmar, the Speakers of our Parliaments, including our colleague Daw Aung San Suu Kyi have done their best in laying democratic foundation for the future generations.

This is an edited extract of the keynote address delivered by HE U Khin Aung Myint, Speaker of Myanmar’s Amyotha Hluttaw (Upper House) during the 2015 Myanmar/Burma Update at The Australian National University’s Coral Bell School of Asia Pacific Affairs, Friday 5 June.