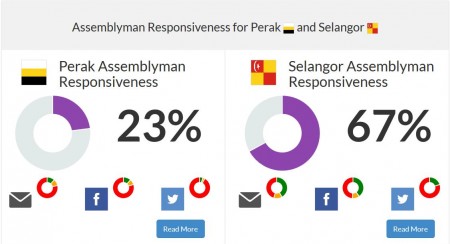 MyKuasa is a project to change voting attitudes in Malaysia, beginning with the states of Perak and Selangor

We commenced on the pledge monitoring project in November 2013 to alter the way performance discussions are had over governments.

In the lead up to the 2013 General Election in Malaysia, the key observations made by both parties/coalitions, media, interest groups and the voting public has been largely over personalities and scandals.

Most politicians from both coalitions abandoned by omission the promises their respective parties made in 2008 as seen by their media statements and issue focus.

KUASA intends to shift it, which is ambitious, or in the least create a space where those who want to have discussions on policy delivery have a reference point.

In recent years, in the period leading up to the 2008 General Election till today, voting in Malaysia is heavily bipartisan and for those who are independents there is the absence of an external decision calculus.

KUASA is aware that any measuring of performances will face scrutiny because matching overt promises with data from varied information points would result in the question, are the right people in the right places with the right basis making these assessments. That is why the project endeavours to be as objective as possible by disclosing all processes, information and statements related the method, collection and report production.

With resource limitations and the need to pilot the project, the states of Perak and Selangor were selected.

Perak was swooped by the parties of DAP, PKR and PAS in 2008 by a razor thin margin, the first time ever, and after a prolonged process of seeking the support of the state royal house a new government was formed. Shortly after the three parties formalised their coalition as Pakatan Rakyat, both at state and federal level. A year later that government collapsed after several assemblymen bolted. The Barisan Nasional regained the state, and after four tumultuous years won with an increased majority last year. The silver state is a bellwether state due to both its rural-urban spread along with a population aware that both coalitions have to win their votes.

Selangor similarly to Perak had a PKR, DAP and PAS government (later as Pakatan) in 2008 after a stable majority in the state assembly. The state was politically volatile throughout the term largely due to the undecided block within the PAS ranks, leadership challenges from within PKR to displace its own party’s mentri besar (chief minister) and sustained attacks from the federal government whose administrative capital is locked within the state. Despite winning a supermajority last year, there is always question marks over the state due to movements inside PKR mostly and its proximity to both the capital and administrative capital.

The BN government of Perak and the Pakatan government of Selangor therefore were easy selections for this project and to offer balance between the two coalitions in the country.

All results can be seen at mykuasa.org

For both states we looked at what was promised in the lead up to the 2013 election and thereafter delivered. As of May 7, 2014 the first report card for both states were made available at our website.

Before going into the report card proper, the examination begin with clarifying the query.

It was easier to ask: “Is your government doing enough for you?”

However that is overly simplistic and tends to favour incumbency.

It was then rephrased to: “Is your government doing better in relations to what they promised and in the general sense are in good shape compared to what their opponents promised and were likely to achieve, from your vantage point?”

While more layered and complex, it invites subjectivity.

Voters are required to evaluate their life circumstances in view of who is governing and filter that view through the lens of what-ifs of an alternate universe where the losing side was in charge.

There is no sure way to weigh regret or count relative joy when it comes to governmental performance, but approaching it with an objective structure rather than obscuring measurements with partisan recriminations can lead to policy based discussions.

Our job to clarify locally the project role increases due to the lack of a culture or efforts to measure the manifestos in previous terms. KUASA has to continuously engage state governments, oppositions, interests groups and voters to sustain the relevance of the project.

However once the project has stronger foundations, as preliminary results already show short-term outcomes, it will give life to a more objective assessment culture in Malaysia.

Both issued manifestos – BN’s in Perak and Pakatan’s in Selangor – were used as starting points after our initial question was formulated.

The manifestos were then separately broken down to the various pledges inside. It yielded an average of 50 promises – 10 sub-sections respectively – each in the states.

Copies were sent to both the government and opposition leaders of the states, for the purposes of verification in early March 2014.

No group returned any statement of objection to the manner in which the promises were apportioned as individual pledges or the sub-categories they fell in.

The third state – after identifying/categorising pledges and verifying them – for each pledge feedback was requested from the state government, state opposition and three interest groups with a relation to the pledge.

For each pledge the marks are between 1 to 10, with 1 being poorly delivered and 10 being in excellent shape.

As a large number of the pledges are long term goals, the evaluation would be on the progress of the pledge delivery. For example Selangor’s promise to build the third bridge over the Klang River and Perak wanting to revive the golden age of its tin mining.

The state government’s self-appraisal constitutes 50 per cent of the total evaluation, with the state opposition raking up 20 per cent. The remaining 30 per cent is for interest groups, which in actuality is 10 per cent for each of the three interest groups responding for the respective pledge.

The report card was delayed to May 5 to facilitate submission from all parties, crucially the state governments and oppositions who assured us their participation.

Unfortunately the state government of Perak and the opposition in Selangor, failed to submit their responses.

The scores were adjusted to the responses received which explains the unusual discrepancy between the state, Selangor government’s favourable rating of themselves without being averaged down by the opposition and Perak government’s non-submission leading to an overemphasis of the opposition’s admonishment of them, resulting in Selangor outstripping substantially Perak.

In the next posts, we will delve into the role of the interest groups with emphasis on the indifference of many NGOs, the dissemination of the information primarily on social media and the thinking behind it, the ensuing roadshow in the second half of June 2014, future community engagement, our side project – assemblymen response rate and efforts to overcome our 1st report cards’ shortcomings.