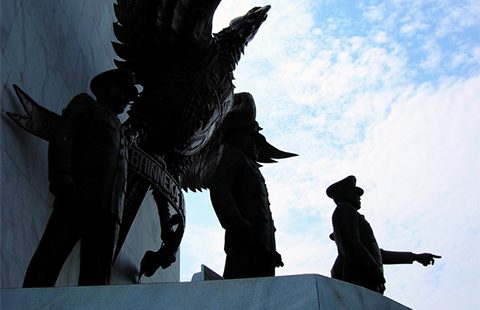 It was a night depicted in the film The Year of Living Dangerously; a time when a reckless president ruled a country in economic freefall.

Truckloads of soldiers rumble through Jakarta’s dimly lit streets. They haul six army generals out of their homes, killing the three who put up a fight, executing the others back at a camp in a rubber plantation.

What happened afterwards is well known. The Indonesian Army blamed the incident on the Indonesian Communist Party, the PKI, and set off a purge that killed up to a million of its supporters.

Fifty years on, the identity and motives of those behind the “September 30 Movement” (G30S as it’s known in Indonesia) remain almost as unclear as they were in 1965. Conspiracy theories abound. Instead of a PKI “coup attempt”, was it a simple army mutiny? A CIA or MI6 false-flag operation? A set-up by operatives of winning general, Suharto?

Recent research, astonishingly in Beijing, is starting to shine some light into this dark corner of history. In 2008 the Chinese Foreign Ministry opened its diplomatic archives covering the years 1961 to 1965.

Before they suddenly closed in mid-2013, Taomo Zhou discovered a document that narrows down this historical detective story. On 5 August, 1965, the PKI general secretary, Dipa Nusantara Aidit, was in Beijing and led a small party delegation into a meeting with Chairman Mao Zedong and other top Chinese figures.

The day before, Sukarno had collapsed and was seen by a team of Chinese doctors sent from Beijing. They got him back on his feet and pronounced him in no imminent danger. But Sukarno’s mortality was at the front of everyone’s minds.

After hearing a report on Sukarno’s health, Mao got straight to the point. “I think the Indonesian right wing is determined to seize power. Are you determined too?” he asked Aidit.

“If Sukarno dies, it would be a question of who gains the upper hand,” Aidit replied, before discussing two scenarios: a direct attack on the PKI, or an army effort to continue Sukarno’s political balance of nationalist, communist and religious parties, which would be “difficult” for the PKI.

“In the first scenario, we plan to establish a military committee,” Aidit went on. “The majority of that committee would be left wing, but it should also include some middle elements. In this way, we would confuse our enemies… If we show our red flag right away, they will oppose us right away.” This scenario matches the revolutionary committee declared that night by Lt-Col Untung, the naively patriotic commander of the presidential palace guard, to forestall what he said was a planned coup by a “Council of Generals” on 5 October. The annual National Armed Forces Day was already bringing large numbers of troops and armour into the capital for a big parade.

As John Roosa explored in his 2006 book Pretext for Mass Murder, Untung was in close collaboration with a PKI operative named Kamaruzaman or “Sjam” who had been working in army circles for years as a spy reporting to Aidit.

The Mao-Aidit transcript firms up Roosa’s scenario that Aidit and Sjam launched the G30S attack as a deniable pre-emptive operation to throw the army leadership off balance.

The rest of the PKI central committee was in the dark, let alone the millions of rank-and-file members. The Chinese weapons promised for a “fifth force” (outside the military and police) of workers and peasants had not arrived.

Possibly it was not intended to murder the generals but to bring them as abject traitors before Sukarno. But three were killed during arrest, and the defence minister, General AH Nasution, managed to escape. The decision to kill the others was a panicky improvisation.

The killings were all that the army needed to portray G30S as another example of PKI treachery. Indonesian Army propagandists, and later in 1965 an MI6 disinformation team based in Singapore, embellished them with lurid details. The US Embassy supplied the army with a list of thousands of PKI cadres for targeting.

Suharto, firmly in control of Jakarta, sent a column of special forces into the heartlands of PKI support. In its wake Muslim groups and other traditionalists were authorised to turn on PKI members, hauling them out for mass executions, night after night, choking rivers with bodies.

Even with the Chinese document, mysteries remain. Centrally, why did Aidit and Sjam act? Did they discover a genuine army plan about to be put into action? Or were they led to believe, falsely, that there was one, with Sjam either swallowing the bait or acting as a double agent for the army?

In either scenario, why were so many top generals caught so off-guard? Why was Suharto, in command of the army’s rapid reaction forces and the Konfrontasi campaign against Malaysia, left off the hit list? Why did Suharto react so calmly when another officer, Colonel Abdul Latief, warned him the night before something was afoot? Why were the G30S leaders drawn from Suharto’s former command in Central Java?

Could it then have been an agent provocateur operation staged by Suharto’s own operatives? Suharto was anti-communist, but unlike the murdered generals had not studied at US military schools and was less at home in Jakarta’s cosmopolitan elite. The Opsus (Special Operations) unit attached to Suharto’s command had already opened clandestine links to the British, to assure them the army was making only token efforts against the new Malaysian federation. Winner takes all. Suharto (far right) at the national monument to the generals slain on 30 September, 1965.

It remains conjecture. Suharto’s close colleagues have stuck closely to the official line, even after the end of his rule in 1998 and death in 2008. It is still unknown if MI6 and the CIA were involved in setting up the G30S plot, or were privy to any knowledge of an Opsus/Army operation.

The Western powers were happy to keep alive the story that a “communist coup attempt” triggered the societal tensions that the PKI had previously stirred by promoting atheism and land redistribution, resulting in a frenzy of killing.

Time magazine hailed the PKI’s obliteration as the “best news” in Southeast Asia for a long time. Then Australian prime minister Harold Holt declared: “With 500,000 to 1 million communist sympathisers knocked off, I think it’s safe to say a reorientation has taken place.”

Joshua Oppenheimer’s recent documentaries The Act of Killing and The Look of Silence have reawakened consciences inside and outside Indonesia about the human cost of this change, though PKI survivor groups still face intimidation and denial.

Successive post-Suharto governments in Jakarta continue to resist the idea of an official inquiry. The archives that matter, in Washington and London, remain closed. Too much is invested in the post-1965 Indonesian story, it seems, for evidence to emerge that it might have started with a deception campaign that led to mass slaughter.

Hamish McDonald is author of two books on Indonesia and currently Journalist-in-Residence at the Australian National University’s College of Asia and the Pacific.

A longer version of this article was also published at Nikkei Asian Review.