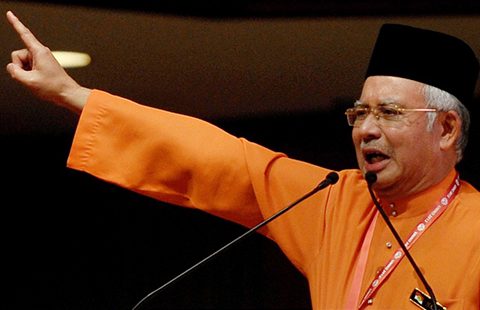 In the face of corruption claims, the Malaysian Prime Minister’s survival hinges on economics.

According to a report in The Wall Street Journal, Najib has siphoned off millions of dollars from the state’s 1MDB investment fund to his own personal accounts. On Saturday the country’s attorney general confirmed that paperwork had been filed for a formal investigation against Najib.

Labelling the accusations as a campaign by his political opponents, Najib is in full denial, taking to Twitter and Facebook to state that he has “never taken funds for personal gain”. He’s also threatened to sue The Wall Street Journal.

But beyond facing corruption claims, Najib is already in the battle of his life for political survival. And like the alleged misdirected 1MDB funds, it’s all about money.

The vanguard against Najib has been led by the indefatigable former prime minister Mahathir Mohammad, as wave after wave of exposé on 1MDB has left the Prime Minister on the defensive. A potential leadership crisis in Razak’s party and core of the ruling Barisan Nasional coalition, the United Malays National Organisation (UMNO), is no longer an understatement.

On the surface, it would appear that the turbulence revolves around what is essentially an intra-elite competition within UMNO.

However, such an analysis would risk being immature, if not populist. The tussles, realignment and clashes between multiple actors and agents cannot be solely reduced to just political figures and parties.

Malaysian politics has taken a centrifugal spin. The determinants of the country’s new political order will ultimately be subjected to greater forces other than the hashed and rehashed political allegiances that operate to secure, capitalise from or bring down a dominant conservative regime that looks too embattled to regain its former glory.

Pleasing young voters with a redefined vision for 2020?
To begin, the electoral mass witnessing such political maneuvering is drawn from a multicultural population where more than half of its citizens are under the age of 30. With some 450,000 Malaysians turning 21 – the eligible voting age in the country – each year, and 70 per cent of the estimated 4.2 million unregistered voters aged between 21 and 40 (as of 2013), the outcome of the coming election (whenever it may be) will be determined by wildcards.

A youthful and increasingly urban electorate would suggest voting patterns could be very volatile, as the young are often divorced of the traditional allegiances of their parents. They will have different political and religious outlooks that the establishment will struggle to understand, accommodate and realise.

Such volatility will be further fuelled by the young, urban electorate’s weaker political and socio-economic status in the face of the rising cost of living and grasping inequalities. This will be exacerbated as the government embarks on more fiscal tightening measures to control public debt in the face of declining oil prices and a weak currency. In this case, the vulnerability of the young will translate become the vulnerability of the incumbent.

In trying to salvage public support, it is therefore ironic that the Najib administration is actually striving towards the Mahathirian dream of Vision 2020 to safeguard its mandate.

Economic prosperity has been touted as the major sell of the current administration, as can be seen from how Vision 2020 is now denominated in the macro-economic terms of reaching gross national income per capita at US$ 15,000 by 2020. Since Najib’s takeover as UMNO leader and Prime Minister in 2009, transformational plans have been rolled out in pursuit of Malaysia achieving a narrowly defined status as a ‘developed nation state’.

The choice of economic progress is understandable as it is a message that can reach out to multiple demographics (crossing urban-rural divides), has tangible results when realised, and lies in an ideological blind spot where it can’t be accused as anti-Islam or pro-secularism (the same divide that broke up opposition coalition Pakatan Rakyat).

Quid pro quo with Bornean politics
However, this ambition is supported and potentially threatened by multiple factors. In support of it is Najib’s insistence on remaining in office despite mounting challenges (unlike his predecessor), thus making a takedown by his opponents limited to either a ‘no-confidence’ vote in parliament, or through intra-UMNO electoral processes; both admittedly a tall-order to perform.

The recalcitrance shown by Najib is buttressed by the backing he has received from Malaysia’s Bornean states. As the Malay core which UMNO usually draws its support from is now fractured and threatened by developments coined by parliamentarian Liew Chin Tong as the “vacuum of Malay leadership”, this has further augmented the position of Sabah and Sarawak as Barisan Nasional and Najib’s ‘fixed deposit’ states.

Second, tremendous economic gains have been made by the states due to greater federal attention. This is especially true in the case of Sarawak. The state brought in the highest amount of foreign direct investments among all states in 2014, a result of intensive pull-in factors like the development of the Sarawak Corridor of Renewable Energy, as well as the implementation of major infrastructure projects such as the Pan Borneo Highway. Already the wealthiest state in Malaysia, these developments foresaw great prospects for Sarawak.

Emphasis in Sabah is also evident in the selection of Kota Kinabalu and Kuching as a growth catalyst cities, as well as initiatives like the Sabah Development Corridor in the 11th Malaysia Plan. It would be hard for Najib’s challenger –whoever that may be – to top this. West Malaysian politics is deeply engrained with narratives based on Malay and Islam hegemony; terms that are deeply repulsive to the larger Bornean multicultural identity.

Challenges to economic transformation and equitable growth
That is not to say all is safe and sound for Najib’s path to the next General Election, scheduled for 2018 at the latest.

Firstly, economic progress must be made not only through impressive gross domestic product (GDP) figures, but the fruits of it have to be shared equitably.

The lack of confidence in the government during the 13th General Election which resulted in a spending splurge to attract voters speaks of the jittery fact that macro-economic targets, like impressive GDP growth, do not always translated into tangible, “bread-and-butter” gains.

Therefore, any economic headwinds hitting Malaysia (like stagflation, credit crisis, recession) will rally significant opposition against the Prime Minister, as seen in the public angst after the implementation of the Goods and Services Tax.

The continued weakening of the ringgit (finally breaching the RM 3.80 psychological barrier at the time of writing) will drive inflation. Having a relatively low national median household income of RM 4,585 (as of 2014) means many within the nation are not poised to withstand the impact.

When investors’ confidence is paramount, it has not helped that the 1MDB fiasco has damaged the nation’s reputation both domestically and abroad, threatening credit ratings that are already saddled by high public and private debt.

A weakened ringgit also means the government has to implement more austere fiscal measures to sustain its ratings. Unpopularity of the administration can only spiral if this continues.

Secondly, a weakened and publicly challenged Malay leadership laced with infighting and lack of commitment by government ministers, has led to a demoralised Malay-dominated government machinery. A Prime Minister hell bent on self-preservation at any cost will further strain the implementation of government policies.

If the outcome is a flawed execution of the 11th Malaysia Plan (which is not short of critics), coupled with greater economic uncertainties, the ruling regime might be hard-pressed to maintain its relevance. Particularly when it considered that the government’s narrative of progress and escape from the middle-income trap will be utterly broken, the effects of which will hurt young voters the most.

Najib’s struggle against his detractors is fundamentally an economic one because in the wake of the Pakatan Rakyat fallout, economics is left as the strongest rallying call against the government. The Prime Minister needs to race ahead of the currently paralysed opposition and the pro-Mahathir faction in his own party to deliver on the strong economic progress he promised.

However, to do so constructively would risk upsetting more parties benefitting from the current model of ethnocratic, state-based clientelism, which has helped generate greater resistance against his administration. Global market forces, including the impending signing of the Trans-Pacific Partnership, could add to the fray with unforeseen consequences.

Najib’s strategy of preservation through economics is as much a plan as it is a gamble.

Nicholas Chan is a postgraduate student with the S Rajaratnam School of International Studies.