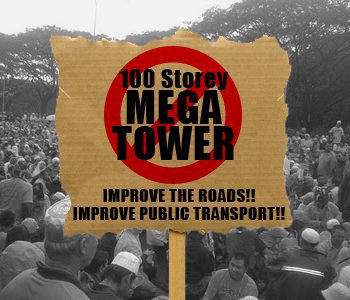 What has happened to the Warisan Merdeka or Najib’s 1 Mega Tower?

During the 2010 budget, Malaysia’s Prime Minister Najib Razak announced the building of a 100 storey mega tower in Kuala Lumpur. This building would be called Warisan Merdeka (Heritage of Independence) and would be built by 2020 – the magical year when the current Prime Minister hopes Malaysia will achieve the status of a high income economy while former strongman Mahathir Mohamed, had envisioned a developed country status – at a cost of US$1.6 billion. The Warisan Merdeka would dwarf the 88 storey Petronas Twin Towers. Najib Razak had stated that the building exemplified the “Malaysia Boleh” (Malaysia Can) spirit.

It’s been a year since, a very long year. The issue of Warisan Merdeka appears to have faded away.

Did the 1 million Malaysians Reject 100-storey Mega Tower facebook (FB) page have the intended effect of putting pressure on Mr. Najib Razak to call off this large development project indefinitely. The FB page now has about 303,000 likes though not quite reaching the 1 million mark. However, the popularity of the FB page was such that in the beginning, it had forced Mr. Najib Razak to “clarify” that this project would be a private sector project albeit by a government linked corporation called Permodalan Nasional Berhad (PNB ~ National Investment Limited) which owns the land.

There were attempts to take this campaign from online to offline. These offline endevaours resulted in the famous “Cake parties.” The government feared these cake parties so much that it had tried to crack down on the people involved in these parties.

This brings us to a vibrantly discussed question – how important are social networks in advocacy efforts?

Have the efforts of those involved in mobilising society against the 1 Mega Tower delivered results? Only time will tell.

For now, it will be interesting to see if the 1M Malaysians Reject 100-storey Mega Tower actually gets its 1 million likes and if cake parties against the 1 Mega Tower continue.