Natural disaster and the city – workshop 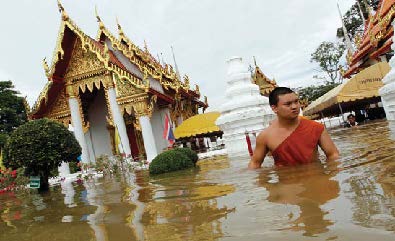 Natural Disaster and the City

The Bangkok floods of 2011 are a classic example of how cities and natural hazards are discursively juxtaposed. Images and media reports of invasive water, hapless human victims and inept urban planners reinforce notions, now commonplace, of the vulnerable city and the calamitous natural event. What is lacking is a sense of history, where a disaster is understood as occurring at the intersection of natural and human processes, processes that are ultimately historical. What is also absent is an appreciation of socio-cultural factors beyond the technicalities of controlling floods and evacuating people. For Bangkok, urban planners have usually not asked what floods mean to residents whose lives have historically been tied to khlong, for whom floods have been part of everyday life and historical experience. Missing, too, is the notion of change and continuity: how urbanisation, migration from the provinces and intra-city moves have affected the relationship between urban dweller and water.

Natural hazards are strongly defined by terms such as ‘disaster’ and ‘catastrophe’. Yet, as in the Bangkok floods, earthquakes, tsunamis and typhoons elsewhere may have rather different meanings for people who confront a range of acute and chronic threats to human life on a daily basis. Cities are also sites of considerable social complexity and fluidity, and historical forces may render some social groups more vulnerable to the hazards than others, or they may provide certain urban communities with the social capital to cope with the onset of a disaster. Although the full impact of the Bangkok floods remains to be seen, the earthquakes and ensuing tsunamis in the Indian Ocean in 2004 and Tohoku in 2011 have become agents of change in Aceh, Southeast Asia, Japan, and indeed the entire world by sheer force of the threat of natural and nuclear hazards to human life.

The workshop invites papers that undertake inter-disciplinary and transnational approaches to the study of natural disasters. It aims to historically contextualise the causes and consequences of disasters and to compare them across societies. The focus is on cities in Southeast Asia and Japan after World War Two, as expressed along three general lines of inquiry.

First, the workshop will explore how the vulnerability of urban populations was influenced by new or accelerated human processes that were most manifest in cities in the postwar period, such as population growth, urbanisation, migration, national integration, economic development, and environmental degradation. Below the macro, the workshop considers how urban communities have coped with hazardous living, how far responses have been fractured by various forms of social stratification and whether local perspectives and agency have diverged from state and international approaches to disaster prevention and rehabilitation. Finally, the workshop examines why some disasters have not merely been events occurring at the tail end of long-term processes, but have themselves become catalysts for historic change in the postwar period.

The session welcomes contributions from historians, geographers, sociologists, and anthropologists, among others, and from both established scholars and PhD students at an advanced stage of their research. Papers can examine individual cities or compare different cities.