Democracy is a popular topic among scholars of politics in Southeast Asia. Liberalism is not. Or at least it hadn’t been up until the last few years, which have seen a spate of books with liberalism in the title: on Islam in Indonesia, capitalism in Singapore, post-colonialism in the Philippines, and now, Liberalism and Democracy in Myanmar (Oxford University Press, 2018). In this new study, Roman David and Ian Holliday draw on extensive survey and interview data to argue that people in Myanmar show inconsistent commitments to the tenets of liberalism in its adjacent aspects: by being, for instance, highly tolerant of some minority groups but highly intolerant of others, notably Rohingya; and, by showing support for democracy but also for the military’s continued role in national politics. They characterize this condition as “limited liberalism”, which they distinguish from semi-liberalism and other hybrid types.

Roman David and Ian Holliday join us on New Books in Southeast Asian Studies to talk about limited liberalism in Myanmar and beyond, about trust in government and the Coronavirus pandemic, prospects for transitional justice, and about doing survey and interview research on politics in Myanmar in the 2010s.

Like this interview? If so you might also be interested in:
• Astrid Noren-Nilsson, Cambodia’s Second Kingdom: Nation, Imagination and Democracy
• Helen Rosenblatt, The Lost History of Liberalism: From Ancient Rome to the Twenty-First Century

Nick Cheesman is a fellow in the College of Asia and the Pacific, Australian National University. He can be reached at [email protected]. 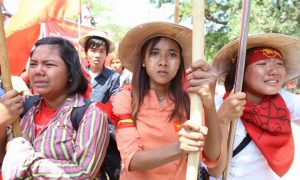