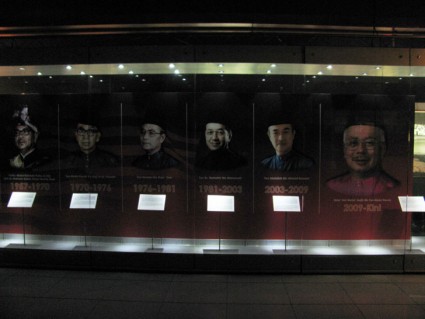 Justice is like true love. You can analyse it, obscure it, ‘spiritualise’ it, deny it and joke about it but at the end if you don’t deal with it, you’ll make a mess of things and your Facebook Relationship status won’t change for the better. In the wake of the upcoming elections, Malaysian politicians tend to succumb to at least three temptation when faced with real justice (or ‘true love’, which is arguably justice’s most intense personal form):

Normalisation – “Plus ├зa change, plus c’est la m├кme chose”, this is the French phrase for “The more things change, the more things remain the same”. It’s also the Barisan Nasional phrase for ‘Let’s do whatever we can to ensure that we don’t need to do anything seriously important”.

Touting GDP growth and Gini coefficient numbers when a wealthy elite continues to amass obscene amounts is like a heart-attack victim bragging that his cholesterol level is down 0.3 points but still eats twenty hot-dogs a day. Abolishing the ISA (and other naughty acronyms) is a cute ploy to make people believe that maybe Malaysia has sold all her anti-democracy laws to North Korea. May as well believe McDonald’s makes burger for charity alone. The Security Offenses Act (the reincarnation of ISA), the Sedition Act, the Peaceful Assembly Act, and most recently, Section 114A of the Evidence Act – aren’t all these in fact window-dressing which make pretty the people’s continuing lack of freedom? And let’s not even get started on how poh-lite the police were with the BERSIH folks; some of our boys in blue made the Gestapo look like kindergarten teachers. The sauce and packaging are lovely but it’s still baloney.

Normalisation is the artificial enactment of change in order not to change. On this issue, even Pakatan Rakyat needs to be careful. Because elections is not primarily about promising that we’ll make Malaysia richer if we get elected. Shouldn’t justice be distinguished from how much money the country makes? Or must every winning party ensure that it’s ultimately ‘pro-business’ and ‘pro-investment’?

On this point, I confess I’m a relatively healthy dude (who can afford insurance and gets free medication) writing on a fancy notebook in an air-conditioned office. I can afford to waste hundreds of dollars monthly getting fat on food I can choose not to finish and watching movies I should choose not to even start. And from what I see, so are most of those nominated. So whilst I obviously disagree with the government’s talk about our country’s economic ‘progress’, I also believe that many (urban) pro-Pakatan-ians simply haven’t a clue about what our rural or much less well-off neighbours are faring.

The elections – believe it or not – are least of all about famous personalities, national statistics and political critiques, and should be most about that single mum who prays each day she doesn’t have to borrow food from the neighbours, or about that older brother who needs to hold down three part-time gigs so his school-going siblings don’t have to join him. Who knows – maybe people like this need to be given two votes or more? Now wouldn’t that shake things up?

It’s therefore not to make the General Elections nothing more than an occasion for certain classes to continue accumulating wealth whilst the less-than-average rakyat is domesticated into accepting his lot in life. This would be the ultimate normalisation of GE13 i.e. it’s insertion into a wealth-generating machine which privileges profits over people.

Parti Sosialis Malaysia (PSM) seems to be the only party which deeply understand this. Which is why Arul and Semenyih could very well be ‘symptomatic’ of Malaysia’s radically new future.

Obscurantism – the (pretty lusty) relationship between Tristan and Isolde started out well but degenerated into something which ruined both their families. Far from depicting the undying love between man and woman, the story showed how destructive adultery can be.

“You complete me” sounds healthy enough and is worth celebrating, by both the couple and their families; “I can’t live without you” begins to border on the pathological and signals a hairline fracture in sanity; “I’d rather die than not have you” promises nothing but misery for both the couple and their social worlds. Tristan’s and Isolde’s was a pseudo-love, ultimately unreal and destructive. It wasn’t true love but one which obscured it.

A concept which similar overtones is that of the Islamic state, hudud law and so on. Like an illegitimate liaison between the wife of one king and the bodyguard of another, what will create ruination is less the falsity of the notion itself as opposed to how the notion denies the reality of everything around it. Implementing hudud in Malaysia, in which Islam’s excesses is already at odds with the nation’s democratic impetus, is rather like serving prime ribs to a patient suffering from gout – the quality of the meat is simply besides the point.

PAS’ problem is not so much their principled embrace of Islamic law, but their utter blindness to what a non-negotiable switch from ‘secular’ to ‘Islamic’ statism entails i.e. they don’t have a clue what could happen. Same thing with high falutin’ promises like lower car prices, water crisis resolutions and ‘instant’ development – what gives political parties the right to talk like genies? Just rub the lamp, make a wish, tick the right box and all your problems will go away. Sure, we don’t know anything for sure, but as politicians let’s promise the world and not be bogged down by risks and the unknown.

Barisan has no right to promise anything after more than five decades of messing up the country; Pakatan has no right to guarantee anything with just half a decade managing only two states (and losing one from the frogging components within themselves). We must reject politicians promoting pseudo-events which have scant grounding in reality, which risks unseen costs and invites inevitable compromises. Maybe during ceramah Q&As’ (and certainly later on when the back-patting have all concluded), all the folks elected need to be continuously grilled as to progress reports, action-steps, issues and everything else careful planning and management entails.

Politicians could take a cue from the book, Invisible Gorilla, which makes the case that doctors who appear less confident (and even have to consult medical manuals in front of the patient) may in fact be more helpful than those who act like walking-talking encyclopedias. This is to say that personal weakness and political strength aren’t necessarily polar opposites.

Denial – reading recent pieces by senior UMNO stalwarts, one gets the impression that their intended audiences are those who shook Tunku’s hand on Merdeka Day. Emphasizing Barisan’s oh-so-unique ability to maintain national harmony and stability and how, say, PAS’ Islamist teachings is responsible for tensions in Kelantan sounds as if the past half-century hasn’t happened. There is a clear echo here of Yao Souchou’s thesis that UMNO enjoys ‘infantalising’ the Malay(sian) subject i.e. feed the citizens fears and fantasies, subtly hint at how the nasty Other person is a threat and thus keep them dependent on you.

Of course, how Barisan supporters can brag about their beloved party’s ethnic peace-making in the light of PERKASA’s freedom to trample all over the dignity of other races and religions is a mystery ranking right up there with Loch Ness. Or is it? The question to Putrajaya is: Is your inaction against supremacist groups due to the fact that 1) you don’t realise these folks are promoting racist hatred or 2) you want them to do your dirty work for you or 3) you’re scared of the big bad Tun? In other words, are you gullible, guilty or gutless?

Does Malaysia really require Barisan Nasional in Putrajaya, failing which Malaysia will degenerate into the Asian version of ‘Dawn of the Dead’? Are the disagreements and ideological divides of the Pakatan Rakyat parties ultimate proof that the Anwar-held pact cannot itself and the country together? The irony is that if Barisan is the better party to guarantee stability (which is akin to a samseng [thug/gangster] ‘guaranteeing’ peace in the neighbourhood), this is all the more reason why Malaysia needs to cast them aside.

Alain Badiou talked about a Truth-Event, something which transforms the very order from which it emanated. And yet this ‘something’ requires the perspective of those who would recognise the radicality of such an event i.e. the event exists only for those who believe in it. The three aforementioned non-events betray the non-belief that pro-Barisan supporters have chosen to disavow. May 6th 2013 could be a new dawn of justice ushered in by a people who, after more than half a century of governmental abuse, can finally believe again.