Nothing to do with politics 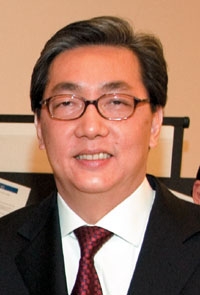 Somkid, a former finance minister and deputy prime minister for the Thaksin government was Thursday appointed chairman of a foreign economic relations committee, Deputy PM’s Secretary-General Weerachai Weeramethikul announced… Somkid said after his appointment that he would work to supplement the works of government agencies to get foreign countries understand the principle of sufficiency economy. Somkid said he still had connections with foreign countries so he would use the connections for his works. He would have to make some foreign visits. Prime Minister Surayud Chulanont said Somkid’s appointment had nothing to do with politics. He said Somkid had offered to help explain the idea of sufficiency economy to foreign countries so he appointed him as the economic envoy.

Somkid has been been called “the man behind Thaksinomics”, and was the mastermind of the populist policies that helped propel the Thai Rak Thai party to a landslide election victory in 2001. The TRT “won by embracing populism on a grand scale,” said the Far Eastern Economic Review. Somkid’s chief policy innovations included the universal healthcare program, 1 million THB development funds for each of Thailand’s 70,000 villages, a 3-year loan freeze for farmers, fast-track privatization of state enterprises, and a national asset management corporation (AMC) to buy up the $20 billion in bad debt carried by Thai banks.

Somkid also pioneered the TRT party’s rural small and medium enterprise (SME) policy. Noting that agriculture remains the most important economic sector, employing 60-70% of the Thai population, the economic challenge was to develop the agricultural sector and link it with the modern sector. This became one of the founding principles of the Thaksin government’s popular One Tambon One Product (OTOP) program.

At the time, The Nation newspaper exclaimed that these policies “amount to a revolution in Thai public policy”.