Occupation of the malls – UPDATED

A reader has sent this brief report from Bangkok. Any other first-hand accounts would be very welcome.

I stopped by the Red Shirt demonstration site at Erawan and Central World shortly before midnight. Tens of thousands of people were camping out, sleeping on the concrete sidewalks and street. Many were kind of “staying up” singing songs, others were gathered to eat in small groups, probably with their relatives and friends from the same towns and cities in the North East.

Some Red Shirts who either were Bangkok residents or staying with Bangkok relatives, were trudging up the stairs to take the Sky Train home to get a good night’s sleep and shower. They seemed weary but satisfied that today had been a big day for them. I would guess more would have gone home for the night except for the government threat to clear the demonstration site by force.

The people choosing to spend such an uncomfortable night on the pavement seemed determined to maintain their position and momentum in the face of the government threat to use military force to clear them out. The police appeared to be delaying any unnecessary confrontation as the demonstrators would be leaving the site to move to the Silom Road area on Sunday in any case.

It would seem highly provocative and improbably inept, almost incredibly stupid, for the military to move in under force of arms in the middle of the night against the tens of thousands of unarmed people.

And the government threat to clear the demonstrators out will probably end up seeming shrill, ineffectual and impotent.

UPDATE Monday 5 April: Here are some images and some more commentary from the same reader:

The first photo from above is the front of the demonstration that streamed past me with no end in site for three solid hours Saturday afternoon. The government deadline to clear the shopping center site last night passed with no crackdown. Today in Bangkok it was quite striking how many more of the millions of migrant residents of Bangkok from the Northeast have started to openly wear Red shirts and clothing and even put up small red flags all over the streets wherever they work and live, even in the neighborhood immediately surrounding the Prime Minister’s residence. The atmosphere inside the demonstration is surprisingly cheerful and festive with quite a lot of music being featured in between the speeches. And so far the demonstrators have shown almost no violence whatsoever with the only violent incidents being several attacks by people who are against the demonstrators. [Hover over the images for captions.] 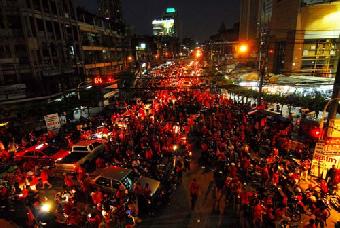 UPDATE 2: And here, courtesy of another reader, is the Facebook fan page of the