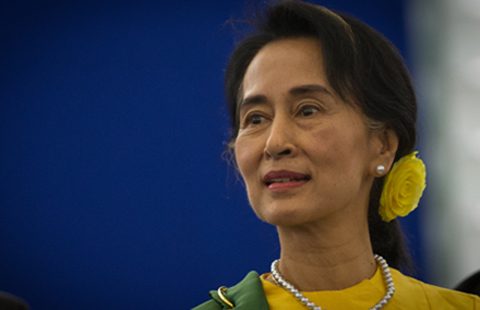 Of pragmatism and politics However, it is unlikely to damage America’s resolve to continue engaging with the country for one reason in particular; China’s rising power in the region.

In a recent article for The Irrawaddy, journalist and long-time Burma hand Bertil Lintner argued that Western governments may be more interested in re-establishing defence ties with Burma’s military, the Tatmadaw, than with pursuing political and human rights issues.

It is an argument supported by the State Department’s muted response to Aung San Suu Kyi’s continued barring from presidential elections. Although the department did issue a statement calling for constitutional reforms to be adopted, there was no threat of introducing new sanctions or of downgrading diplomatic ties.

The US’s continuing support for the Burmese hybrid civilian-military government is a clear sign that Washington’s concern over China’s growing regional presence is of greater importance than democratic reform. In the past China has exerted a great deal of influence over Burma. After much of the world abandoned the country due to the annulment of democratic elections in 1990, China continued to provide significant economic and military aid to keep Burma afloat.

This wasn’t resisted by the US because it did not perceive strong strategic interests in the country after the end of the Cold War. Since the opening of Burma to external economic and political input after the 2010 national elections, China has lost its exclusive access to the country. Now, Burma may become a rook in America’s attempts to mediate Chinese expansion.

In June, a delegation of US officials, including representatives from the US military, visited Burma and discussed the possibility of providing non-combat training for the Tatmadaw. This type of cooperation is not without precedent.

Prior to the 1988 political protests in Burma and subsequent government crackdown, America provided training to Burmese soldiers through the International Military Education and Training (IMET) program. This was primarily to assist fighting the communist insurgency in the country which was seen by the US as a threat to regional stability. Communism may no longer be the enemy, but China’s rise as a direct competitor to US power in Asia has prompted Washington to look to reliable regional middle powers for support.

Just across the border, Thailand has traditionally played a much stronger role in US military strategy than Burma. In particular, its hosting of Operation Cobra Gold, the world’s largest annual military exercise has given Thailand a favourable status as a regional defence partner with the US.

However, May’s coup has cast doubt on Thailand’s future military cooperation with the US. Already US $4.7 million of security aid earmarked for Thailand has been cut and threats have been made about cancelling Cobra Gold if democratic procedures are not restored in the near future.

Although Burma has equally fallen short of becoming a credible democracy, it is still a plausible alternative to Thailand as a military partner if the latter fails to regain its position as a stable, democratic leader in Southeast Asia.

In the near future Burma is unlikely to become a leading bulwark in America’s strategy to manage China’s rise but it is also unlikely to slip away because of concerns about democratic reform and human rights.

Burma is aware of the implications of explicitly siding with either the United States or China and will probably continue to practice its traditional foreign policy of stoic neutralism. However, it is also aware of the benefits that could come from greater military cooperation with the US. The Tatmadaw still plays a significant role in the Burmese political system and its influence cannot be underestimated. The possibility of improving its own capabilities by accepting defence assistance from the US could be a tempting proposition for military officials.

Likewise, providing training assistance, even in a non-combat capacity, may be Washington’s first step towards creating a defence partnership with Burma. Such a move would certainly upset China but it would also consolidate the US’s position in Southeast Asia. If America’s goal is to keep Chinese power in check then it needs to cultivate as many friends as it can in Southeast Asia.

Given the time and attention, Burma could become one of America’s middle power partners in Asia. But this may cost the US its commitment to seeing the country become a fully functional and effective democracy.

Gareth Robinson is an honours student studying Asia Pacific security at the ANU College of Asia and the Pacific. His research focuses on the history of US-Burma relations. You can follow him on Twitter @gar_rob.