On January 13, 2006, Sonthi Limthongkul led 3,000 protestors from his rally site in Lumpini Park to Government House. A few hundred of them entered the compound. At that time, this action shocked many observers. They thought that Sonthi had gone too far in his attempt to bring Thaksin down.

Two and a half years later, this same Sonthi is leading what his Manager newspaper in English called a “General Uprising.” Its core element is the storming and occupation of the Government House compound (not the buildings) in order to overthrow the legitimately elected government of Samak Sundaravej. In its editorial on August 29, 2008, the Bangkok Post stated the obvious, “The cornerstone of the PAD’s protest is the refusal to recognize the executive and legislative branches that took office after the Dec 23 election.” In the same issue of the Bangkok Post, one of the PAD leaders, Democrat party list MP Somkiat Phongpaiboon, was quoted with the noteworthy words, “It’s an honour to be part of an attempt to bring down someone’s regime and an undesirable government.”

In the following, I present a few pictures that were taken on August 28, 2008. When I walked up Rajadamnoen Avenue starting at the King Prajadhipok Museum, I encountered long rows of police cars. Pictures 1 and 2: The police officers could not do much more than wait and eat. Picture 3: From afar, this use anti-Thaksin billboard signaled the beginning of the PAD’s “Kingdom”. Picture 4: Some newspaper readers probably do not realize that the PAD does not merely have erected a huge stage near the UN center, but also established an entire small town of tents. Picture 5: Many of the tents house protestors from the provinces. This picture shows a group from Srisaket province. The handwritten signboard says, “PAD Srisaket, we won’t return until we have won.” Picture 6: The Santi Asoke sect, of which one of the PAD leaders, Chamlong Srimuang, is a fervent follower, helps in supplying protestors with (vegetarian) food. This picture shows part of their kitchen. A young man with an MA degree from Thammasat University served as a volunteer for the cooks. In English, he told me that he had joined them because he disliked that the government would hire thugs to harm these women. Picture 7: Three young girls from Santi Asoke in front of the toilet trucks provided by the Bangkok Metropolitan Administration. Picture 9 and Picture 9a: There were many stalls selling t-shirts, headbands, scarves, buttons, and stickers – everything the properly attired protestor would need to topple the government. Also important were the plastic hands used for making noise. They sold for “only 35 baht.” Picture 10: I could not find any printed material outlining the political demands and ideas of the PAD. Maybe, I simply overlooked them, maybe, Manager Newspaper does this job already, or maybe, the PAD’s goals are self-evident. One big sign, however, listed the characteristics of “Politics that are truly democratic”. Number nine reads, “Politicians must be really independent and not be slaves of worldly matters.” Picture 11: In an article in the Bangkok Post (August 28), Pokpong Lawansiri pointed out that the PAD was not any “longer a broad-based ‘alliance’ [of NGO groups] as it was during the anti-Thaksin days in 2006.” One might well doubt the accuracy of the second part of this statement. One group that is still with the PAD is the State Enterprises Labor Relations Confederation. Picture 12: The PAD had tried to fortify all gates of Government House. At some, women were placed in front as deterrence against police assault. 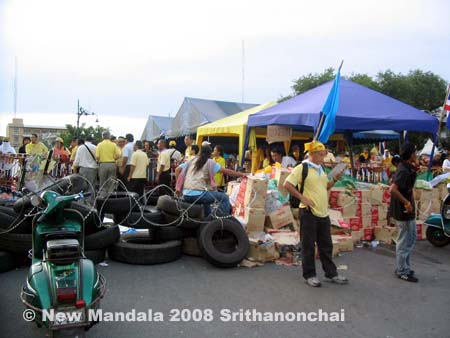 Picture 13 and Picture 14. All roads leading to Government House were also blocked with barricades. These two pictures show the outer and inner levels of one such barricade. Picture 15: The final picture shows the situation in front of the only entry to the Government House compound. It was only about a meter wide, with people constantly trying to get through, and pushing from behind.