People’s Movement for a Just Society

Asia is home to 75% of the world’s farming households, 80 percent of which are small-scale farmers, who are increasingly facing threats to their way of life resulting from unchecked large-scale investments in land, in particular for agriculture, biofuels and mining (International Land Coalition Asia website).

The last groups of motorbikes finally arrived back home as the sun was setting tonight in Chiang Mai, Chiang Rai, Nan, Phayao, Phrae and Mae Hongson today, concluding their week-long journey down to Bangkok and back. After a journey of more than 1,300 kms while braving the rains and dangerous highways on their Honda Dreams in order to demand government action to address the plight of landless farmers, many wondered if their efforts were worth it (especially the two riders who suffered broken bones during accidents en route). 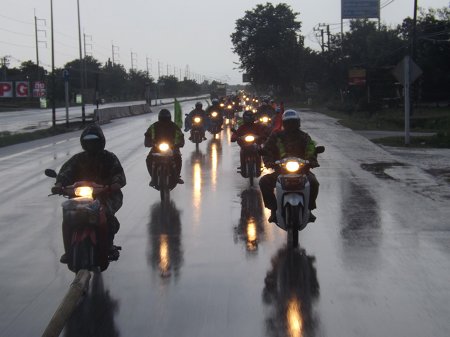 The People’s Movement for a Just Society (P-move) is a network organization organized to strengthen the voices of different, but related causes working to bring justice for marginalized groups in Thailand, including land rights for small-scale farmers, citizenship for stateless persons, fair compensation for communities forced to relocate to accommodate large scale state projects, and housing solutions for urban slum dwellers, among others. This coalition is similar in its organization and objectives to the Assembly of the Poor, and many of its members were core members of the AOP. P-move has organized mass protests over the last four years to put pressure on the government to address their problems and provide legal frameworks and policies to assist them in attaining justice.

P-move’s most recent campaign brought together network members from all the regions to the Government House to demand that PM Yingluck follow up on her promises to take actions to help P-move’s issues. One month after being elected in July 2011, Yingluck’s Peua Thai Party agreed to P-move’s demand that committees be set-up to address the issues facing the network members. After these committee failed to take any actions, P-move organized a protest a January mobile cabinet meeting held in Chiang Mai. At that time, Yingluck signed a document ensuring that the committees would have to action with 90 days and would be headed by her deputy PM Yongyuth Wichaidit, who recently resigned amid the Alpine Golf Course scandal investigations. P-move’s goal for this movement, therefore, was to have Yingluck agree to take over the chair of the committees and ensure that actions would be taken quickly and without fear of another minister being dismissed, resigning or be transferred.

The landless farmers have been advocating for a three-pronged policy to address their issues:

All three of these policies have been approved at certain levels, but have yet to be fully implemented.

The stateless persons, meanwhile, are continuing to demand that the Central Government put pressure on the local agencies to implement the legislation regarding citizenship that has already been approved.

Members from the Esaan and the Southern regions travelled to Bangkok on busses, trucks and vans, while the Northern members organized a motorcycle caravan that would take three days to descend upon the capital. It was hoped that by travelling in a large group with flags and banners flying, the farmers would be able to spread their message and raise the awareness of communities along the roads leading to Bangkok.

Having recently worked closely with Northern farmers’ organizations while researching the land reform movement for my master’s thesis , I was able to accompany the farmers’ caravan from Chiang Mai to Bangkok, and have put together some photos from the journey in order to let others know about the efforts of these marginalized groups. The movement was also covered in a few articles (here and here) in the Bangkok Post as well as some of the Thai newspapers and television stations. The caravan begins the 600+ km. journey in Chiang Mai. At this point, the group consisted of about 50 motorbikes driven by Chiang Mai farmers and stateless persons. At the Kruba Siwichai monument in Doi Tee, Lamphun, the caravan was joined by Mae Hongson and Lamphun farmers and stateless persons, and together they made merit at this revered monk’s statue before continuing the journey. The caravan travelled to Den Chai, Phrae, where motorbikes from Chiang Rai, Nan, Phayao and Phrae joined up bringing the total to over 200 vehicles. Travelling time was decreased from here on out, as the caravan needed to stop to fill up with petrol every 50 kms or so. You can imagine the looks on the faces on the petrol station’s attendants when the caravan rolled in! Outside of DenChai, a local monk blesses the caravan as it passes through his community. The first night’s resting place was the large meeting room in Wat Chom Thong in Phitsanulok. A short sleep filled with mosquitoes and barking temple dogs did not do much to recharge the batteries of the weary travelers. The next morning, the caravan travelled a short distance to Naresuan University in Phitsanulok where they made merit in front of the statue of King Naresuan and then read a press release for reporters from Thai media who were contacted beforehand to meet them there. The caravan passing through Nakorn Sawan on day 2 of the journey. The green flags contained the logo of P-move and slogans of the movement. The motorbikes formed three lines and took up two lanes from this point on. During the second night, caravan members ‘camped out’ in the Ayutthaya Provincial Gymnasium. Less mosquitoes and a bit cooler here than in Phitsanulok, so the next morning, we all felt more refreshed. Stopping in front of the Thai PBS Headquarters on the Vipawadee-Rangit Road to bring attention from the media. The first stop within Bangkok was at the United Nations Building on Ratchadamnern Road. Here, P-move members from the four regions joined together with representatives from other Asian countries to petition them UN to assist them. This event was held because this year “World Habitat Day” fell on October 1st. After leaving the UN Building shortly after noon, P-move members walked and drove a few blocks over to Phitsanulok Road and set up in front of the Government House. The police helped out at this point, and kept the two far lanes of the road open so that traffic could still move in two directions on this block. At this point there were estimated to be over 2,000 P-move members present. A stage was set up directly opposite the side entrance to the Government House that was guarded by security forces equipped with anti-riot gear. After unsuccessfully trying to meet with Yingluck during the first day, one of P-move leaders is interviewed by a cable TV reporter the night of October 1. P-move members from Esaan sleeping out in the open on Phitsanulok Road the night of October 1st. Sleeping on the sidewalk in front of the Government House on October 1st. Finally, a meeting with PM Yingluck was secured the morning of October 2nd. Here, a Karen woman representing the stateless members greets Yingluck. After the meeting was completed, a government representative climbed the stage and discussed what the government would do to address the items proposed by P-move. The committees would proceed forward with their assigned tasks and would need to have achieved results within 90 days. However, PM Yingluck refused to take the Chair position for the committees, instead delegating this role to one her deputies. P-move members discuss the implications of the morning’s meeting with the PM and plans for future actions before dispersing. The PM agreed to pay for fuel costs for the motorbike caravan and also offered a police escort for the journey back North. The motorcycles lined up at the Royal Plaza on October 2nd, ready to begin the long journey back home. P-move leaders were of the opinion that this campaign had been a success, although they were disappointed that Yingluck would not agree to head the re-established committee. They were encouraged that they were able to secure an appointment with the PM in such a short time. Furthermore, this was the first time that the organizations working for stateless persons’ rights had travelled together with the landless farmers to Bangkok, which would strengthen the cause of both of these movements. The P-move caravan returned safely to Chiang Mai and the rest of the Northern provinces by October 5th, and P-move leaders are currently assessing the situation and preparing for the next round of action, presumably after the 90-day deadline for action that was set by Yingluck.