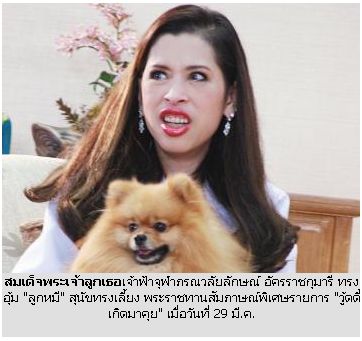 There are few opportunities to fully understand the popularity of Thailand’s monarchy among the Thai population. Under current conditions it is impossible, for instance, for an opinion poll to ask potentially troublesome questions about King Bhumibol Adulyadej and his family.

So students of Thai society and politics have become accustomed to reading the tea leaves, sniffing the som tam, and pondering a wide range of imponderables. Thankfully there are occasions when resources emerge to provide some extra clarity.

Princess Chulabhorn Walailak’s recent interview with Mr. Vuthithorn “Woody” Milintachinda is one such resource. It has been suggested to me that this is the most public indication of royal interests and palace perspectives since Queen Sirikit attended a 2008 People’s Alliance for Democracy funeral. More details on that earlier episode of royal publicity are available here and here.

Now, with Princess Chulabhorn’s remarkable interview anybody wanting to understand Thai public sentiments on the royal family has a new resource. Where to begin?

Political Prisoners in Thailand offers a substantial commentary on the interview that draws, in part, on New Mandala‘s coverage. It is well worth a look. As are the key excerpts available over at Prachatai.

The Youtube statistics on the various uploads of Princess Chulabhorn’s interview are also illustrative.

It struck me as particularly interesting that, as it stands, the first part of the interview has received 773 “likes” and 168 “dislikes”. Positive and negative reactions to other parts of the interview are similarly distributed. This is hardly scientific stuff but it does provide one signal of prevailing responses. According to the more thorough breakdown of statistics, the overwhelming majority of viewers are (naturally enough) in Thailand and the “video is most popular with” females aged 25-34, females aged 35-44 and males aged 35-44.

Some people among the tens of thousands who have watched the Youtube videos are upset that there are any “dislikes” at all. In response to the less than universally positive responses one commentator suggests that, “р╕Др╕Щр╕Чр╕╡р╣Ир╕Бр╕Фя╗┐ dislike р╕бр╕▒р╕Щр╣Др╕бр╣Ир╣Гр╕Кр╣Ир╕Др╕Щр╣Др╕Чр╕в р╕бр╕▒р╕Щр╣Ар╕Ыр╣Зр╕Щр╣Ар╕Фр╕Щр╕Щр╕гр╕Б” (“Those who press dislike are not Thai. They are the castoffs of hell.”)

More generally, the YouTube videos of the interview have generated a huge number of comments, with dozens noting their tearful appreciation of Princess Chulabhorn’s words and efforts. In a standard response, many commentators suggest that they are “lucky” or “proud” to have been “born Thai”.

Among the countless such endorsements and digital cries of “long live the king” there are other comments circulating that pick up on Woody’s surreptitious nibble of the royal dog’s cupcake. “Delicious”, exclaims Woody. That scene will be part of next week’s installment. And this short video provides a taste of what else is to come.

Elsewhere there are comments that tilt in more politically sensitive directions. One short rejoinder announces “р╣Др╕бр╣Ир╕гр╕▒р╕Бр╕Юр╣Ир╕ня╗┐ р╕Вр╕нр╣Гр╕лр╣Йр╕нр╕нр╕Бр╣Др╕Ы!”. Translations of that comment will vary but I’d render it as “I don’t love the king, please get out!”. That comment has received two thumbs up.

New Mandala reader responses to the various links and issues raised in this post are, as ever, very welcome.