In 2014, new legislation introducing a Constituency Development Fund (hereafter CDF) was passed by Myanmar’s Union parliament, then dominated by the Union Solidarity and Development Party (USDP). Commonly observed in Westminster-inspired parliamentary systems in the developing world, these types of distributive funds allocate budgetary resources to members of the national legislature, which they can spend annually on specific state-funded projects in their own electoral constituencies, without any local tax increase.

The law adopted in 2014 carved from Myanmar’s Union budget an annual fund of 33 billion kyat (US$25 million) and allowed the CDFs to be disbursed equally in each of the country’s 330 townships. Each electoral constituency would thus receive an annual sum of 100 million kyat (US$75,000) to be spent on small development projects and public works.

The CDFs were designed to promote annual community-based projects, chiefly focused on electricity access, water sanitation, and the construction of basic infrastructure such as roads, bridges, clinics, and schools. The management of CDFs was to be supervised by an appointed Township Development Implementation Committee, which would gather representatives from the local administration or municipal offices, and the four Members of Parliament (MPs) that each of the 330 constituencies elects: one legislator in each chamber of the bicameral Union parliament (the representative from the lower house chairing the committee), and two from the country’s fourteen subnational legislatures.

These types of constituency-level development schemes are pejoratively labelled “pork barrel” programs in American political literature. In 1800s America, salt pork and bacon stored in huge barrels were considered a feast meal for poor families and slave communities. “Delivering pork” or “bringing home the bacon” soon became metaphors for the goods and benefits one could receive “from above”, whether from a plantation owner or a benefactor—a politician, for instance. Pork barrel spending has therefore long epitomised a central government’s largesse and the distribution of state-funded services or goods to local districts by elected representatives, usually in exchange for political support.

The legislative and party politics that pork barrel spending programs have generated around the world have long been criticised by the international good governance community, for having three pernicious effects. First, distributing “pork” and channelling government funds to one’s constituents are indeed widely assumed to help a politician build a clientele of loyal voters. Elected representatives “pass on pork” by redistributing governmental tax revenues to their home districts and, in the process, aim to be credited for it, and win re-election to office. Instead of being distributed upon the basis of need and consistent rules, government resources are often delivered disproportionately to politicians’ existing or prospective electoral clientele.

Second, especially in developing countries with weak state capacity, the politics of pork allocation has often opened avenues for corruption, fiscal fraud, embezzlement, and bribery. And third, since budgets for pork barrel programs commonly originate from the central state’s coffers, instead of local taxpayers, these schemes often lead to massive waste of public money and increased national debt, in developing and wealthy modern economies alike.

Of the Union- and state or regional-level lawmakers I have interviewed since the inception of the CDFs in early 2014, a substantial majority have expressed positive feedback towards, and proved eager to make the most of, these new pork barrelling opportunities. Many MPs have proudly defended the constituency work they have conducted through the CDF scheme. As a matter of fact, despite mounting criticism of the pork barrelling scheme, the new National League for Democracy leadership decided to continue the program after its resounding victory in the 2015 general election.

CDFs are said to have directly empowered Myanmar’s new breed of elected representatives—at least the most active or powerful ones—and permitted them to deliver valuable public goods and developmental services, even if selectively, to their home districts. If well-advertised, a small yet promptly executed project can show that a freshly elected official holds the “power to act” and bring about change in a society long perceived to be under the full control of distant, unapproachable “powers that be”—be it the Myanmar armed forces or powerful ministers. Many an elected MP has promoted in his or her constituency the construction of sewer pipes and free public toilets, street (re)pavement, the installation of solar panels in remote areas where public electricity is scarce, or the building of schools and local clinics.

The mechanisms of the CDFs seem also to have grown more institutionalised each year, my interviews have revealed. Discussions about project selection within township-level committees and quarter- or ward-level subcommittees have in many areas become more frequent, even methodical. Elected legislators now commonly consult with engineers, architects, and the private sector, as well as village headmen and representatives all year round, before selecting which development works to fund every year. Financial records are kept and submitted annually by Union-level MPs to the Union parliament’s office, which disburses the funds.

This has not prevented criticism from emerging, though, about the efficiency and local relevance of the CDF-funded projects, and the way they are chosen and managed by some MPs and township officials. Indeed, dialogue tends to remain limited—or even bluntly top-down—in many constituencies, where the local bureaucracy remains either lethargic or under the full control of the military-run General Administration Department. Powerful local strongmen—some of whom are MPs—also tend to disregard dialogue and public consultation processes.

Moreover, regional disparities have often been stressed by MPs. CDFs are by law distributed in equal amounts to each township every year. Elected representatives from poor (usually rural) constituencies comprised of hundreds of villages have started to complain that their home districts deserve more developmental support than, say, the wealthy quarters of the Golden Valley in Yangon. Legislators, especially freshly elected ones, have also realised how cumbersome and time consuming the whole annual process of selecting, vetting, reporting, and maintaining financial records of the CDFs can be.

However, the three main issues of concern about CDFs habitually raised by international experts and the good governance community—waste of public money, corruption, and the entrenchment of political clientelism—do not appear to have much alarmed Myanmar’s current legislative and political elites.

First, the absolute amount of public money spent annually through the CDF scheme appears marginal. After all, each constituency is allowed a maximum of 20 projects capped at 5 million kyats (US$3,700) per year. Many foreign embassies and international organisations based in Yangon have long developed small grant programs allocating larger amounts of money to similar developmental projects.

Second, rumours about a myriad of local corruption cases have gradually surfaced, particularly since the NLD took control of the legislature in 2016. My recent interviews have revealed a vast amount of anecdotal evidence of abuses and misappropriation, especially in Myanmar’s rural areas. Every year, once CDF projects are selected by MPs and approved by township-level development committees, a tender system is used to choose contractors. This is typically when corruption appears, worldwide. Tendering for construction projects and public works is often an opaque business involving the fraudulent inflation of costs, bribery of public officials, and nepotism. One NLD member elected in 2015 laughed during an interview that in “previous times”, a kickback of 4 lakh kyats for a construction project worth 50 lakh kyat (US$3,700) was common practice, one lakh being 100,000 in the numbering system of the Indian subcontinent.

In February 2017, the ruling party even announced it had launched an internal investigation against approximately 150 of its elected representatives. Letters of complaint and public objections against NLD members have increasingly been linked to the management of the CDFs, one party leader admitted. However, as of July 2017 no case has been taken to court and no punitive measures have been publicly announced. Given Myanmar’s low level of economic development, its deep-rooted and multidimensional corruption, as well as its appalling record concerning the rule of law, malpractices seem inevitable. Devising stronger guidelines for ethical and transparent use of such public funds is therefore needed.

Third, Myanmar’s ongoing transition from direct military rule to “something else” is taking place in a societal environment that has long favoured traditional clientelistic ties of social and political dependence, at all levels of society. But the significance, forms, and functions of political clientelism in present-day Myanmar remain mostly unexamined. Its influence on the current post-junta political and electoral process is unknown, a matter of speculation at best.

It is therefore impossible to draw definitive conclusions about the linkages between distributive politics, the recent use of CDFs, and patterns of re-election based on Myanmar’s 2015 election—the sole reasonably free and fair election, held soon after the new CDF legislation was introduced in 2014. Indeed, the national and regional polls organised in November 2015 were first and foremost a vote against the old military-backed elites and a massive plebiscite in favour of Aung San Suu Kyi. Fewer than 13% of the civilian lawmakers elected in 2010 were returned to the Union parliament five years later. Most incumbent legislators, particularly those from the then ruling USDP, spent lavishly in their constituencies during their five-year tenure (2011-2016), either through their own personal patronage networks, the party coffers, or through the CDF scheme after 2014. But most were defeated in November 2015. Subsequent elections may provide more solid empirical indications about the linkages among the effective work and constituency services (including the delivery of goods though CDFs) that Myanmar’s backbenchers have carried out, their personal clientelistic networks and party affiliation, and the country’s electoral cycles and voting patterns.

The initial positive dynamics created by Myanmar’s novel constituency-level fund should not be overlooked, though, especially given the country’s legacy of top-down authoritarianism. The fact that individual citizens and local community-based associations and civil society groups can (and do) lodge complaints or seek clarification on the management of funds is a promising sign of progress towards more local participatory governance. The new CDF scheme has provided important mechanisms for Myanmar’s new parliamentarians to connect, and interact, with their constituents on a regular basis. It has offered new opportunities to discuss the basic infrastructure and development needs of each township throughout the country. This has also encouraged more dialogue among regional and national legislators representing the same constituency, but in different assemblies, which can prove a challenge when all belong to rival political parties. Not all areas in the country have witnessed such positive developments, though. Many townships remain affected by conflict and excessive militarisation, or simply do not benefit from the activism of their elected representatives.

So in order to address familiar deficiencies of such distributive programmes, the legislation can be strengthened through a series of new amendments, while international capacity building training on CDF best practices can be expanded to improve the management of these funds in Myanmar, instead of scrapping the extant law (which several advocacy groups have suggested). Finding the right forms of accountability in the selection process and the vetting of potential or completed projects will be key to the continuation of this popular program. Transparency, accountability, and the powers of institutions tasked with the auditing and oversight of the CDFs must, and can, be strengthened.

Also, where the electorate is ill informed and institutions (including political parties) are weak, vote buying and clientelism tend to be rife, and corruption is more likely to occur. Public information, participation, and monitoring, especially at the township level down to the village or tract level, must therefore be expanded in Myanmar. After all, CDFs may provide its citizens with a rare opportunity to be involved in their own local community development, foster a novel form of “bottom up” participatory governance after years of top down authoritarianism, while proving a valuable instrument to hold its policymakers more accountable than they have ever been. 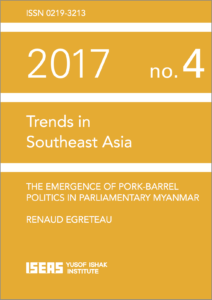 Renaud Egreteau researches the resurgence of parliamentary affairs and legislative politics in post-junta Myanmar. He taught comparative politics at the University of Hong Kong and Sciences Po, Paris. His latest monograph is Caretaking Democratization: The Military and Political Change in Myanmar (New York: Oxford University Press & London: Hurst). You can follow him on Twitter at @R_Egreteau.

A longer version of this post was published as part of the ISEAS–Yusof Ishak Institute’s Trends in Southeast Asia series, available for download here.