What does the Constitutional Court’s handling of disputes from the legislative election in April tell us about how it will deal with case challenging the presidential election result?

A Perludem team observing the court’s handling of challenges to the legislative elections during May and June found an institution in a hurry to resolve cases according to the tight deadline imposed by its own regulations.

It was tough for any plaintiff to make a strong case as the Court sets a high bar for evidence and proof. It also restricted the number of witnesses. After the April elections, it received reports of violations that included the manipulation of votes, counting errors, bias by officials, and the nebulous term of “money politics” that could mean buying votes or bribing officials.

To successfully challenge an election result those complaining had to meet an ambiguous standard. They were supposed to demonstrate the suspected violations were “systematic, structured, and massive” when no definition really exists about what this means. Plaintiffs had to also show a correlation between the alleged violation and how this has influenced the result.

Given the poor quality of the written petitions lodged in May, it was not surprising that most cases were dismissed. They were full of accusations and errors, but little evidence about how various elections were stolen. While a more detailed analysis of the cases is on the Perludem website, only in a few cases was the evidence sufficiently compelling for court to make a favourable ruling. Of the 903 cases submitted in May by parties on behalf of their members or individual candidates to the upper house (DPD), only 22 were granted.

Only in one case did the court’s decision change the result. In Sampang 2 district in Madura the Constitutional Court ordered a recount in a number of villages after forms were found to be improperly signed, with blank columns, and missing the proper signatures of witnesses in a number of polling stations. The recounts found more than 25,000 votes in this district were invalid as they had not been properly initialed by polling station officials. This could be a widespread administrative error by poorly trained staff or ballot box stuffing by corrupt local officials. The “error” favoured candidates from various parties, mostly PKB, Gerindra, Democrat, PPP, Hanura, and PBB. After the recount, votes for the PBB candidate dropped from 9,951 to 6,713 while those received by Nasdem rose from 8,034 to 8,752. It was a small increase but at this lower level it was enough to secure the seat.

In the other 21, the cases court ordered recounts did not the change results. This was a small success rate for all the effort by large party legal teams.

Similarly, the documents submitted by lawyers for the Prabowo-Hatta campaign on 26 July and revised on 7 August were hastily arranged and more like a political statement than a well-argued lawsuit. Prabowo’s statement to the court on 6 August, which repeated much of his campaign rhetoric, only reinforced this perception. There are obvious legal and logical flaws in the case as well as poor expression, bad spelling, and numbers that do not add up. As one of the justices observed, there was often little synchronization between the foundation of the suit and its demands for redress. It made sweeping claims that the election is all 33 provinces was flawed, for example, but provided no evidence for eight provinces.

The Prabowo-Hatta camp made serious allegations of widespread fraud but struggled to demonstrate how or where it happened as well as make the vital link to show who had benefited from these wrongs. One exception was when they produced a polling station official from South Nias as a witness who told of colleagues punching 59 unused ballots leading to Jokowi-JK winning 68-32 at that location. But proof of systematic, structured, and massive fraud was lacking. Potentially, some inadequacies in electoral administration they highlighted could have been taken advantage by either side. 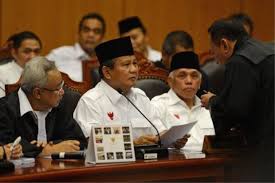 The case of the additional special voters list, known as the DPKTb, illustrates this best. After being criticized in 2009 for disenfranchising too many voters with its strict rules, the General Election Commission (KPU) in 2014 created this list for people with valid ID cards, passports, or other proof of identity but who were not registered on the permanent, additional, or special voters’ lists. To cast a ballot using the DPKTb, voters would have to wait until the last hour of voting between midday and 1pm. This was a simple but not foolproof safeguard against people using these special provisions to vote twice.

The Prabowo-Hatta lawyers allege that polling officials did not properly follow procedures in recording the identities of those using the DPKTb. Maybe it was not perfectly implemented, but the KPU has obligation to ensure that the constitutional right of every citizen to vote is respected and by creating the DPKTb it was trying to do this. The inconsistency of the application of polling day procedures is a widely observed problem and the KPU’s weak system of training officials probably contributes to this, but this is something to address in future elections. In court, the plaintiffs cannot just highlight a problem with election administration. They must show fraud, one candidate benefited from it, and these violations had a material effect on the outcome of the election.

As the court began to hear evidence on Friday 8 August, the weaknesses of the Prabowo-Hatta case became even more apparent. During this hearing, 25 witnesses from East Java, Central Java, and Jakarta were questioned by the nine constitutional court judges and cross examined by the defendant’s legal counsel, especially about the abuse of the DPKTb.

As with the legislative cases, the judges put considerable pressure on witnesses. They are impatient with vague witnesses and do tolerate interruptions from lawyers. The laws governing the appeals puts the judges on a tight timetable and frustrations from the bench are often visible. After some witnesses initially claimed they had seen voters go to the polling booths twice, many were forced to recant their testimony as they only have second or third hand “information gathered by our team”. They had not, in fact, “witnessed” anything themselves. This is a crucial point as the absence of eyewitness testimony has been often used to throw out cases in other electoral disputes. When the Prabowo-Hatta team witnesses were grilled on the number of voters on the permanent list, turnout, the numbers of valid or invalid votes more often than not they failed the test. They fumbled, did not know the numbers, cited incomplete data, or quoted figures that did not add up. When they were specific, the potential fraud was small and inconsequential in cases where the margin of victory was more than 8 million votes. In one case, a witness told of double voting in Sragen; another highlighted the potential loss of 10-15 votes in Demak. The plaintiff looked a long way off proving that the DPKTb was used to commit systematic, structural, and massive fraud.

When election officials took their turn in the witness box on 11 August, their testimony was more precise, although the pressure of appearing court was intimidating and did fluster some. In Sragen, testified one official, one person had been caught voting twice, was reported to the police and is facing charges. Surabaya Municipal KPU Commissioner Nurul Amalia countered the plaintiff’s allegations noting that they cited polling stations that did not exist, for example, claiming irregularities at TPS No. 95 in Gubeng sub-district when this administrative unit had only 82 polling stations. Officials from Demak gave a first-hand explanation about why one vote at TPS Batusari was disqualified after it was not properly signed by a polling station official. The evidence of the officials was detailed, solid, professional, and backed by documents. There were many small problems, but not massive fraud.

While these observations come from the first few days of hearings, the case being made by the Prabowo-Hatta team looks just as weak as those hundreds of failed cases presented after the legislative elections. Some administrative infractions were shown but so far nothing that would alter the outcome of the election result.

After the former chief justice Akil Mochtar was sentenced to life in prison for taking bribes to influence election cases, many worried about whether the court would have enough legitimacy to fulfill its constitutional duties. The bribery scandal has not sidelined the institution. While some of the unsuccessful candidates might disagree, for the most part the public has accepted the court’s rulings in the legislative cases. For the Prabowo-Hatta ticket, the court remains the last legal avenue to challenge the result. If this is all they have got, they should expect to lose.

Veri Junaidi is the Deputy Director of Perkumpulan Untuk Pemilu dan Demokrasi (Perludem) and the author of Mahkamah Konstitusi Bukan Mahkamah Kalkulator (Themis Books 2012). Follow him on Twitter at @verijunaidi

Jim Della-Giacoma is a Visiting Fellow at the Australian National University’s College of Asia and the Pacific, School of International, Political, and Strategic Studies in the Department of Political and Social Change. Follow him on Twitter at @jimdella