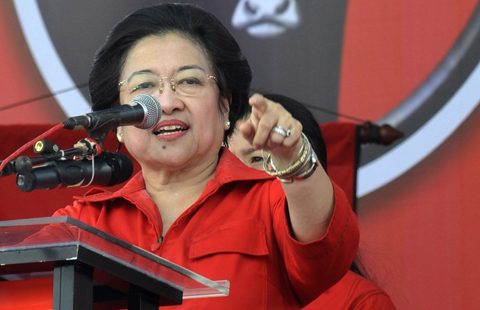 An all too familiar face?

Jokowi may be a ‘fresh start’, but there’s still a lot of the old order in Indonesia’s democracy and political parties, writes Stephen Sherlock.

A huge sigh of relief that Prabowo was (just) defeated and that Indonesia will not be led by relic of the New Order, a xenophobe….well we all know the rest.

But now the celebrations are over, how do things look in the cold light of the morning? Beyond the personalities involved, was this the best that Indonesia’s democracy could produce? What does it say about the political parties that sponsored the candidates?

Jokowi seems a sincere man, certainly unpretentious and an excellent mayor. He did, in Edward Aspinall’s words, do Indonesia a great service just by keeping Prabowo out of the presidential palace. But this surely not enough – elections are not just about keeping the reins of power from the worst candidates, but about the people’s right and opportunity to select the leader who is the best.

But, of course, they can only select from what is on offer. And – with all due respect to Jokowi – the choice in this election was far too limited. It was a contest between a throwback to the Suharto era and a provincial mayor thrust into the role of presidential candidate because there was no-one else available. With only about a decade of municipal government experience behind him, Jokowi was arguably elected five or 10 years too soon – a good candidate for 2019 or 2024. He still needed more time to get the muscle and grit that comes with conceiving and implementing policy, building coalitions and banging heads together at a serious level of government.

But enough about Jokowi. This is not meant to be a critique of him but an expression of serious worry about the future of Indonesian politics and political parties. And a word of caution for party bashers: I don’t think parties are fundamentally anti-democratic and I don’t think we should marginalise them from the system. We actually need better and stronger parties that play the kind of roles that are usually expected of them, like recruiting the successive generations of new political leaders, for example.

It should be a cause of concern that, after 15 years of democracy and reformasi (remember that?) the parties are still dominated by figures who were power players under the old order. Less than a year ago, before Jokowi’s candidacy became a real possibility, people were discussing scenarios for the presidential line-up such as Prabowo versus Megawati, or maybe Prabowo, Megawati and Bakrie, or perhaps Prabowo, Megawati, Bakrie and Kalla. Even dinosaurs like Wiranto were being discussed seriously.

Prominent “new” candidates included people such as Surya Pahlo and Mahfud MD, hardly fresh sprouts from the grassroots. The only really fresh faces, such as Anies Baswaden, were utterly unknown outside the Jakarta political class. Then there were the “dynastic” figures like Megawati’s daughter Puan Maharani and SBY’s son, Edhie Baskoro. Hardly any of these prospective candidates reached double figures in opinion polls. The parties are simply incapable of regenerating their leadership ranks and pushing solid, electable figures through party ranks.

This is because parties seem uninterested in building party structures and systems for encouraging and training party cadre (known as party institutionalisation to the cognoscenti). Financial resources are thrown at election campaigns and great efforts are sometimes made to raise money for leading candidates (although open list legislative elections have put the burden on individual DPR/D candidates), but little or no money can ever be found to pay for party staff devoted to policy, organisation and recruitment. Most party advisers are part-time people working in business, academia or as personal staff paid from state allocations for office-holders such as DPR members.

The problem is that party leadership positions are seen purely as vehicles for personal ambitions. There is a culture of ‘winner takes all’ with regard to party offices and losing contenders often conclude they have no alternative but to leave and form their own party. The long line of ex-Golkar figures establishing presidential vanity parties – from Wiranto to Prabowo to Surya Pahlo – is testament to this. A logical political home for SBY before 2004 would have been in PDIP, but Megawati was unable to contemplate the idea that the party could be in hands of someone not in possession of Sukarno genes. Hence SBY went on to create the Democrat Party, which in turn has utterly failed to produce a successor to its founder. And in the case of the “presidential” parties – those created as vehicles for personal presidential ambition – what chance would any aspiring front-rank leader within NasDem, Hanura or Gerindra have of supplanting their respective creators?

Candidate selection processes within the parties have been subverted by money politics, dynastic ambitions and squabbles, and a systemic neglect of the task of developing policy alternatives. The role of money in Bakrie’s victory in Golkar and Hatta’s leading position within PAN is well known. Golkar was willing to accept a leader and prospective presidential candidate with absolutely zero popular appeal because he was able to deposit the envelopes in the right laps.

In the case of PDIP, its domination by dynastic politics is obvious and has greatly hampered its capacity to cultivate rising leadership, despite the considerable wealth of younger talent in its lower ranks. Although Megawati managed to suppress her ambitions for Puan long enough to allow Jokowi to be the presidential candidate, her game-playing delays in naming him added to the incoherence of the Jokowi campaign and came close to costing him the election. And during the campaign, the gap between the enthusiastic volunteers (relawan) and the PDIP party functionaries was frequently noted by close observers. Rather than welcoming the fact that normal people were embracing the opportunity to change their country’s future though party politics, the apparatchiks saw them as a threat to their monopoly. Jokowi’s biggest challenges in office will be to establish and maintain a base of support within his own party and avoid being undermined by jealous party colleagues.

As such, the 2014 election the party system failed to put forward a spectrum of candidates which offered a good range of choices to the electorate. As a lot of commentary did suggest, there was a choice between a reversion to the past and a rather wishful grasp for a hopeful future. But the fact that a figure like Prabowo could become so popular is a dire reflection on the electorate’s disappointment with party politics. Many people seem to have voted for him because he projected the image that he was not one of today’s squabbling politicians but the kind of firm leader that the country once had. Concrete economic, social, environmental and governmental issues barely received a mention in the campaign.

Weak party consolidation and institutionalisation is one of the most important examples of the limitations of post-Suharto political reforms. The hardware of constitutional structures is in place and there is no significant anti-democratic sentiment – inchoate or organised – but the software of the system is still beset by operational problems. The people who make institutions work have become very adept at manipulating the system for short-term and sectional gain, and the old autocratic players have ‘reorganised’ themselves (in Hadiz and Robison’s words) to survive and prosper in the new democratic environment. Despite institutional reform, the informal rules of the political game as played out in Suharto’s time remain essentially unchanged.

Today there is a continuing tendency towards collusive consensus among the political elite rather than open competition and debate, especially over questions of policy. Coalition-building has been random, ‘promiscuous’, opportunistic, and determined by division of the spoils of office rather than reflecting coalitions of interests committed to policy outcomes.

Conditions are nowhere near so dire as to threaten the basis of Indonesian democracy, but if democratic institutions are seen as failing to deliver prosperity and opportunity to a young growing population there could be dangers of instability ahead. Jokowi has come to office with a huge reservoir of goodwill and an ocean of high expectations. In the months leading up to his inauguration, it seems a good time to start asking some hard questions about what happens next.

Stephen Sherlock is a consultant on governance and politics, and Visiting Fellow in the Department of Political and Social Change, ANU College of Asia and the Pacific.