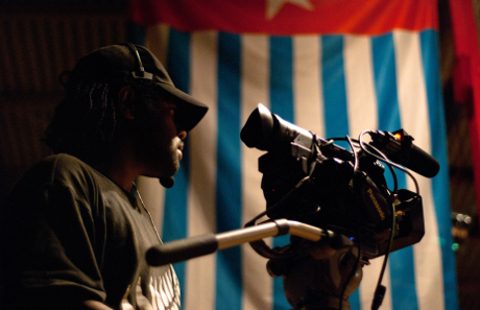 Over the weekend Indonesia’s President, Joko ‘Jokowi’ Widodo, promised to give foreign journalists full access to Papua – the home of a decades-long separatist movement fighting for independence.

Indonesia has a long history of restricting success to Papua for the foreign press, as well as other researchers and aid workers. Indonesia officially took over Papua in 1963, by then the last outpost of Dutch colonial rule in the archipelago. Foreign journalists were able to travel to Papua in the late-1960s to report on the lead up to ‘Act of Free Choice’ in 1969, but they were guided tours organised through the military, and journalists’ movements were restricted.

In June 1969, The Jakarta Foreign Correspondents Club lodged a protest with the Ministry of Information on the restriction on travel and entry of foreign press into Papua, claiming the measures would have grave consequences for Indonesia’s image abroad and lend substance to doubts about the government’s approach to the preparations for voting day.[1] Foreign journalists would later declare it was neither free nor a choice, as the vote was conducted by a concession of elders chosen under pressure from the Indonesian military.

During Indonesia’s New Order Period (1965-1998), the region was heavily controlled by the licensing system of the Ministry of Information which had links to the military, and access to the region for foreign journalists remained under tight control. President Suharto made sure Papua was effectively sealed off from the outside world.[2].

In 1998 the New Order regime fell and Indonesia began a process of democratisation. President BJ Habibie’s decision to allow foreign journalists into East Timor in 1999, and the subsequent referendum held there that same year, meant international media was heavily focused on the plight of the East Timorese. Foreign media reports, particularly in Australia, were crucial in pressuring for the Australian-led INTERFET forces to enter East Timor to resolve the violence occurring after 78 per cent of East Timorese had voted for independence.[3]

The failure of the military to subdue the international press from reporting in East Timor led to a stronger stance on foreign media access to Papua. For example, Oswalk Iten of the Swiss daily Neue Zurcher Zeitung snuck into West Papua in 2000, but was arrested and kept in jail for 12 days in Jayapura.[4] The message to other foreign journalists was clear – stay out of Papua. Of great concern too was the danger foreign journalists placed on locals who assisted them with their story. In 2004 Mark Worth, a Papua New Guinean-born journalist who had worked with many international media companies in the region, was found dead in a hotel room near Jayapura, reportedly of pneumonia, two days after it was announced his documentary, Land of the Morning Star, would premier in Australia.[5]

As with Indonesia’s occupation of East Timor, most of the attempts to travel to the region have come from Australian journalists, due to the interest in the story and the support from many activists groups in Australia. In September 2006, three Australian journalists, Morgan Mellish (Australian Financial Review), Stephen Fitzpatrick (The Australian) and Geoff Thompson (ABC) travelled together to Papua on a rarely issued permit. All reported that they were under constant surveillance and pressures from the military in the region.[6] Other foreign journalists have deliberately manoeuvred around the process.

Papua New Guinea journalists have also attempted to enter their neighbours’ territory, including West Papuan journalists working in the local press there, but for the most part PNG’s media relies heavily on official sources when covering the province.[7]

In 2012, a Czech journalist was detained and then deported for entering the country on a tourist visa and travelling to Papua without official permission. He was arrested after photographing an independence rally in Manokwari.[8] In 2013, Australian Associated Press Jakarta-based correspondent Karlis Salna had applied for entry a dozen times in two years, and eventually decided to go just as his posting was coming to an end. He sent a text to the Indonesian Foreign Minister’s spokesperson to say he was doing so, and was then awarded a permit.

Also in 2013, Fairfax Australia correspondent Michael Bachelard gained permission to report from Papua about HIV/AIDS, but with the intention of reporting about Papuan children who were being forcibly converted to Islam. Bachelard later wrote: “I knew that I would never be approved to do the stolen children story, so I came up with something else that I thought would get me through the door”.[9]

Numerous other foreign journalists had applied to report on various topics and were not granted a visa, including those representing Reuters and Al Jazeera. In August 2014, two French journalists Valentine Bourrat and Thomas Dandois were arrested in the territory and detained for over two months. Their subsequent trial in October was the first time foreign journalists had been taken to court by the Indonesian government for entering Papua. During the trial, it was revealed that journalists must receive permission from 18 different government agencies in Jakarta to travel to Papua.[10]

The debate surrounding the restrictions on international media is similar to most subnational authoritarian regimes. The Indonesian government justifies restrictions and visas on the ground of journalists’ safety, even if in over 50 years of Indonesian control of the region, there has not been one example where a foreign journalist had been brought to harm by Papuan separatists. A further justification is that international coverage must be restricted otherwise coverage will be distorted to demonise Indonesia’s involvement in the region and focus only on military abuses, which the government saw as highly sporadic and often sensationalised by the foreign press. The Indonesian government argues that restrictions were necessary in order to limit support for the separatist movement in Papua.

However, it would seem that as long as the region remained tightly restricted, Western journalists tend to focus on what the Indonesian government ‘does not want the world to know’, or what it is ‘trying to hide’, rather than hearing from a range of local Papuan and Indonesian government voices. [11] The ABC’s Hayden Cooper reported “West Papua’s untold story” in 2012. In 2013, Mark Davis from SBS’s Dateline reported from the region, claiming rather hyperbolically that “no one’s been here in 10 years”.[12]

Restrictions over foreign media have only led to preconceived negative reports about Indonesia’s involvement in the region, and have therefore been doing harm for the potential for more nuanced reporting of Papuan politics and society. And of course, as many human rights activists have stated, access for foreign observers and journalists is crucial for worldwide attention on injustices, and to negate military impunity.

While exposure to international scrutiny is important, the focus on Western journalistic access largely ignores the gains made, and the difficulties faced, by the local media organisations whose aims are also to provide credible, independent and critical information.

It is important to remember that many local Papuan journalists face threats and intimidation from security forces on a regular basis simply for doing their job. It is difficult for them to report on issues involving local politicians, human rights and the role of security forces in the region. There are numerous stories that simply can’t be published in the local press. So let’s not forget local journalists, and more broadly the restrictions on freedom of expression in the Papua provinces.

But certainly, ending the visa restrictions for foreign journalists is a good place for Jokowi to start.

Ross Tapsell is a lecturer in Asian studies at the Australian National University’s College of Asia and the Pacific. He researchers the media in Indonesia and Malaysia. Sections of this piece are derived from his previous work in The Conversation and from a scholarly journal article in South East Asia Research, due for publication in September, 2016.

[11] Australia Television station Seven’s current affairs show Today Tonight crew entered Jayapura on tourist visas to report on an orphaned boy, Wawah, who they claimed was going to be killed and eaten at some stage in the next ten years. In 2012, the ABC’s 730 Report title was “Reign of Terror”, see http://www.abc.net.au/correspondents/content/2012/s3580924.htm (accessed 21 September 2014).