Time for another graph …

(Let me say at the outset that I am moving well out of my academic comfort zone here, so please feel free to tell me if you think I have this completely wrong!)

But to what extent have the benefits of government support been mitigated (or reinforced) by changes in the “terms of trade” confronted by rural producers?

With the help of a colleague, I have compiled data on the “producer price index” (PPI) for both crops and manufactured goods in Thailand. The producer price is the price received by the producer! The index does not measure the absolute price, but the relative change in price. In the following graph the price for both crops and manufactured goods are set at 100 in the base year, 1981. 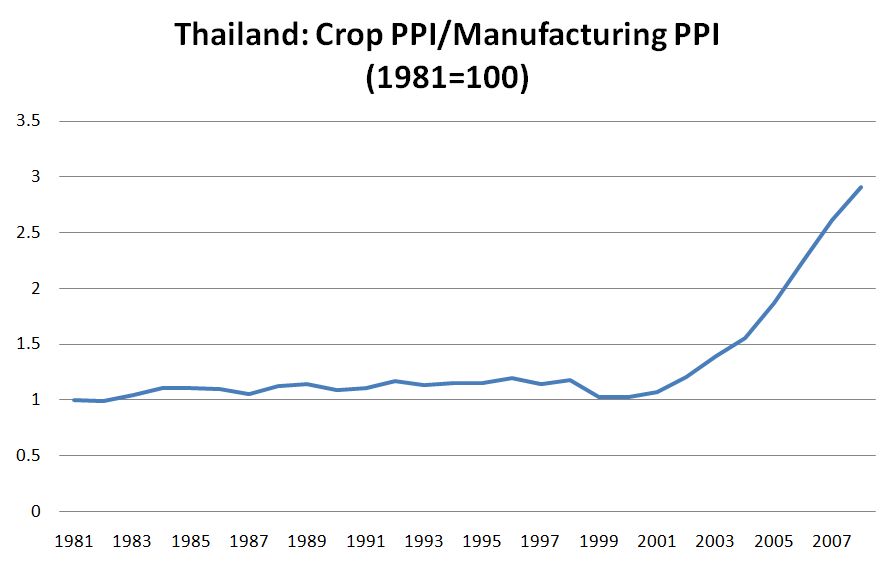 As you can see, there was a modest increase in favour of crops up until the late 1990s. This was reversed in 1998/1999 (impact of the financial crisis?). Since then, the ratio has moved sharply in favour of agricultural producers. The increase in world prices for major crops grown in Thailand is one important factor in this, but domestic crop price support provided by Thaksin, and subsequent governments, was probably also a factor.

If the data are correct, or even roughtly correct, it is little wonder that many farmers have very favourable memories of the Thaksin era.

As I note above, I am not particularly confident about my methodology or interpretation, so I would greatly appreciate any informed feedback.