Railroad ready to roll in Laos 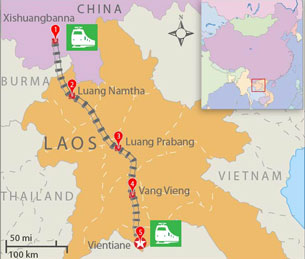 New Mandala readers may recall that in May I wrote about plans for a railway linking Laos to Vietnam and China, funded by the Chinese. Less than six months later, Radio Free Asia (RFA) has reported that construction on the Laos-China section of the track was due to commence on October 28th. I mentioned the “can-do” nature of Chinese investment in May but this a remarkable turnaround by any measure, even if it is in fact the “survey” that is under way (as reported by the Vientiane Times). This impression is only reinforced for anyone who knows the mountainous terrain covered by the train (the map is RFA’s).

In May I wrote of the train’s symbolic significance in historical terms, drawing a partial parallel between colonial France and contemporary China. But what will the railway mean to Laos in more practical terms? For RFA it

While many Laotians are excited about improving their country’s transportation infrastructure, others are concerned that China is likely to profit from the agreement.

“Greater benefits will go to China because, first of all, the goods exported from China to Laos will increase sharply due to convenient transport; and secondly, products from local natural resources, like mineral products, will be easily transported back to China,” one Vientiane resident said.

“Outgoing and incoming commodity transportation is all for Chinese products … They invest and produce here, and what they produce are their products–nothing is Lao. Then they [often] export those products back to China,” he said.

“The products produced in [China] they also bring here to sell in Laos.”

The Vientiane resident agreed that the influx of money from Chinese tourists would benefit the people of Laos, but added that not all of the Chinese would be coming simply to visit.

“For tourism, yes, in this aspect, Laos would greatly benefit from the railroad construction. [But] Chinese people will come to Laos, and if they come, they won’t want to leave. They will try to settle here, as is the situation now,” he said.

Conservative in character, these reservations are typical enough responses to regional and global economic integration, and would probably be voiced anywhere. But how widespread are these concerns and, understandable though they are, is anyone realistically saying the train is not, on balance, a good thing?

Laotians who say the project was designed partly to provide employment to the domestic population are also wary of the large number of Chinese laborers who will be required to relocate to Laos to build the railroad over the next four years.

A Lao official, who asked to remain anonymous, said that skilled labor and the clearance of unexploded ordnance along the railroad route will be conducted jointly by both Chinese and Lao workers, while environmental protection measures will be handled solely by Lao companies.

“However, Chinese workers will surely outnumber Lao workers because Laos has less labor,” the official added.

The official said he was unsure how many Chinese workers would be required to construct the railroad, but according to a senior official of Thailand’s railroad authority, the project will require around 64,000 laborers from China.

The Thai official added that the project would directly benefit the Laotian people who will be able to generate an income from selling their local products to the thousands of Chinese workers.

Also familiar from a range of countries where China is investing, these anxieties dovetail with those above to create the impression of a widespread anti-Chinese feeling expressed in xenophobic terms. But to what extent is this representative?

So far, at least, the people I’ve spoken to about foreign investment (in general terms rather than specifically about the train) seem to accept certain costs or conditions as necessary by products of Chinese investment, which on balance is embraced as a positive thing. Most emphatically on display in last year’s SEA Games, this appears to reflect the historical trend in Laos of achieving an accommodation between local dependence and autonomy. That is, to have autonomy in a small country surrounded by much larger ones there is recognition that there must also be dependence. But I am sure the balance between the two – or perceptions of it – varies considerably from place to place and among different groups of people. Certainly this is one lesson we can draw from work done on Chinese investment in rubber plantations in northern Laos.

In any case, I’d very interested to know how, on balance, the Laos-China railway is being received in Laos.