How does the understanding of Malaysian institutions as limited access orders (LAOs) explain the degree of inequality in Malaysia?

Horizontal inequalities in Malaysia have shown to constitute a threat of violence. My argument is that the permanence of this threat although possibly minimal now, is used to reinforce the practice of limited access order institutions in the governance of the country. The organisation and increasing sophistication of these institutions are further leading to increased vertical inequality as expressed in the widening of intra-ethnic disparities.

Limited Access Orders as a form of social order

One view maps good governance as the key to economic growth and social development. New institutionalists like Douglass North argue that stable political institutions played an important role in the development of industrialized countries (Young, 2009). His further work delved into the relationship of violence and social organization as institutions described as social orders.

All societies evolve and maintain institutions, organizations and beliefs the allow them to manage violence, or the threat of it. In some societies, elites play a major role in controlling the social order. Classical mainstream elite theory describes the idea that in all societies, including democracies, organised minorities rule the unorganised majority.

The concept of limited access orders (LAOs) describes situations in which states do not have a secure monopoly on violence, and thus it organises itself among elites to control violence (North, Wallis, & Weingast, 2009). In limited access orders, political elites control the economy and split up the share so that each gets a portion of the rents[1]. Outbreaks of violence lead to the reduction in amount of benefits, thus elites have the incentive to maintain peace.

Adequate stability of rents in the order requires limiting access and competition. This is contradictory to the logic of an open access order (OAO). Open access is characteristic of the market economies of all upper-income, developed countries. A large portion of their policies have open competition, competitive multi-party democratic systems whilst at the same time, importantly, a secure state monopoly on violence (North, Wallis, Webb, & Weingast, 2007).

Both social orders are a form of equilibrium in society. The important concept is that social structures such as organizations and beliefs that are contained in a society adhere to the cultural and political logic of the social order of that particular society. Hence it is difficult to simply transfer advice and institutions from an open access society into one with a limited order. These ‘development advice’ upset the equilibrium that is present in the order, thus will be resisted especially if this relates to reduction of rents. This may explain for example, why the degree of inequality persists in a particular society.

Malaysia can be considered an example of a mature limited access order that has the potential to transcend to an open access order if conditions are right. However, these incentives are not yet present in the country, a situation maintained partly by persistence of inequality. 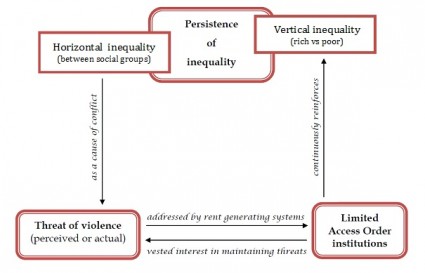 Limited Access Orders and the Persistence of Inequality in Malaysia.

Malaysia has one of the highest rates of income inequality in Asia. Although it has shown improvements in steps to address inequalities, considerable degrees of horizontal inequality still exist between socio-economic population sub-groups and sub-national regions. These horizontal inequalities in Malaysia have shown to constitute a historical threat of violence. The permanence of this threat is used to reinforce and justify the practice of LAO institutions in the governance of the country.

This threat, currently significant or not, is strengthening the position of elites in the social order of an LAO that is expressed in the country. This is primarily done through limiting access to political and economic resources, via manipulation of affirmative action policies, political cronyism and by controlling access to certain social establishments. The increasing sophistication of Malaysian LAO institutions are leading to the accumulation of wealth among elites. Although there might be minimal trickle down effects for the middle class, this situation is leading to increased vertical inequality as expressed in the widening of intra-ethnic disparities.

As a mature LAO, Malaysia has the challenge of transcending the order into an open access one. Unfortunately, the system has yet to achieve sufficient doorstep conditions as elites in the political and economic environment still yield strong influences and have not been provided sufficient incentive to change. This has lead to a situation where inequality is persistent and maintained of a source of rent.

Interestingly, the theory of LAOs according to North gives much responsibility to elites for change to occur. That reasoning assumes spatial control over resources in a certain area. In the globalising era however, control over resources like media and borders is difficult. Additionally civil society may not have as much rent-seeking considerations. As such, these institutions may depend on the social phenomena of the time. Collective action might also be a possibility to pressure change in the social order in Malaysia, as was seen in the Coalition for Free and Fair Elections (BERSIH 2.0) rallies.

Internal social conflict is a manifestation of the desire to right the wrong by those who lose out from unjust socio-economic development. This can be seen in the increased support for (pro-opposition) non-raced based economic policy and increased civil society pressure. The Malaysian NEP showcases the need for limited duration of action of policies of direct affirmative action (Stewart, 2010). While it was broadly supported in the initial years, opposition has increased from both the non-bumiputera as well as the bumiputeras[2], of whom it was originally intended to help. There has been an increasing call that policies to tackle inequalities should be needs based, ethnically blind, open and transparent.

Ultimately, the adaptation of open access order institutions have not shown changes in the fundamental logic that is practiced in maintaining institutions that maximize elite rent. Coupled with increasing exposure to neo-liberal economic principles, inequality in Malaysia may stand to worsen as the rich get richer and the poor lose their freedom to choose.

This framework adds to discussions of increasing levels of inequality in Malaysia. With the crescendo leading up to, during and following the 13th Malaysian General Elections in May 2013, increased threats of violence, actual manifestations of violence, and warnings from multiple parties are being revealed. It is hoped that this outline contributes to the understanding of a few pertinent issues in the dialogue for change post GE-13 including:

1. Why is the form of social order in Malaysia so persistent?

2. Why is it so important that racial and religious issues be played up now, especially at critical junctures, in social reform?

3. Why a perceived threat is equally as important to maintain as an actual threat of violence?

4. Especially for the Pakatan Rakyat opposition coalition, why a change in government might not drastically change issues of inequality. The fact that our institutions are so ingrained in this system of social order is a major stumbling block for reform.

5. Can a new government provide the doorstep conditions necessary to transform the social order of our political economy to a more open one?

Consequently, with more critical avenues to understand the issue of inequality, it is hoped that we can transcend mere political rhetoric and work together for a more equal and equitable future in Malaysia for all Malaysians.

Stewart, F. (2010). Horizontal inequalities as a cause of conflict: a review of CRISE findings. Centre for Research on Inequality, Human Security and Ethnicity. Oxford.

[1] In this context of political economics, rent refers to the amount of any payment to the owner of a factor of production (land, labor or capital) that is above and beyond the minimum payment that would have been necessary to motivate that owner not to transfer it to some other use.

[2] The term ‘bumiputera’ comes from the Sanskrit word bhumiputra, which can be translated literally as “sons of the soil” which recognises the “special position” of the Malays and indigenous peoples of Sabah and Sarawak as provided in the Federal Constitution of Malaysia. Definitions of bumiputra in public use vary among different institutions, organizations, and government departments and agencies

Dr. Subatra Jayaraj is an independent consultant for the United Nations Economic and Social Commission for Asia and the Pacific. She is currently working on the International Conference on Population and Development (ICPD) beyond 2014 regional review, and has a special interest in inequality and health inequities.