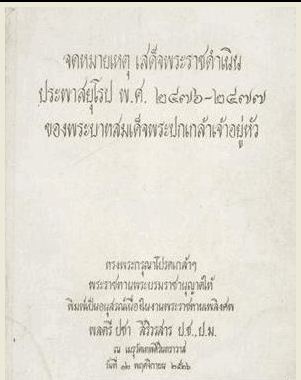 I came across this stunning photo of King Prajadhipok (Rama VII) of Siam visiting Germany on 6 July 1934. He was greeted by German leader Adolf Hitler. The meeting took place just two years after the abolition of absolute monarchy and only eight months before the King’s abdication in March 1935.

His German trip was part of his tour of Europe from 1933 to 1934, which included Germany, Portugal, Switzerland, Ireland and Denmark. He arrived in Germany by ship from Birmingham on 2 July 1934, stopping over briefly in Copenhagen. The King was accompanied by his wife — Queen Rambhai Barni. It was reported that the meeting took place at Berlin’s city hall. As they met for the first time, King Prachadhipok shook hands with Hitler. Afterwards, they proceeded to visit cutting-edge gasoline plants and other modern scientific laboratories.

After Berlin, the King went on to visit a Thai pavilion at Bad Homburg, Bavaria. He spent the afternoon there, enjoying beautiful gardens, buying some souvenirs, and also eating lunch at the pavilion. Could this just be a normal trip, or rather was it a trip that was meant to seek support from a great nation, like Germany at the time, for reclaiming royal power at a critical moment in Thai politics?

Pavin Chachavalpongpun is an Associate Professor at the Centre for Southeast Asian Studies, Kyoto University