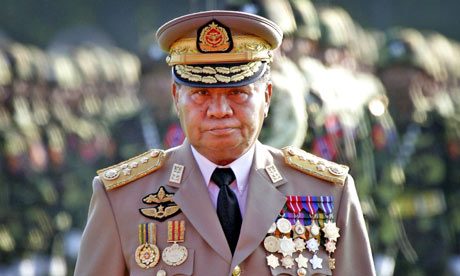 Reckoning with Senior General Than Shwe This column was published in The Myanmar Times on Monday, 4 April 2016.

The first time I crossed the border into Myanmar, 15 years ago, I was sat in a small office waiting for my paperwork.

On the wall above the bustle of the immigration outpost was a photo of Senior General Than Shwe peering down on proceedings. I remember being surprised, at first because I was spending so much time in Thailand where portraits of the king and queen are ubiquitous. Here was an unfamiliar face.

I recall also being surprised because I was under the impression that Myanmar’s military junta was a group of around a dozen powerful figures. But here was the supremo. Back then, there was not much quality analysis of how the State Peace and Development Council worked in practice.

What we did know was that the military high command’s standing, forever tarnished by the events of 1988, only got worse through the 1990s and early 2000s. These were the years when Senior General Than Shwe took charge, monopolised decision-making and systematically eliminated opposition to his dictates.

The country was sad, impoverished, isolated. For many Myanmar people, Senior General Than Shwe was personally responsible for this national tragedy. The buck stopped right at the top.

Even though he was the dominant figure in Myanmar life for two decades, U Than Shwe is still a tough nut to crack. There is one substantial book about him: a 2010 biography and criticism written by Benedict Rogers. Most of the other materials on his life are fragments, snippets, footnotes.

I have no doubt that the senior general, trained in the dark arts of psychological warfare, enjoys this carefully cultivated inaccessibility.

Take the experience of the diplomatic community. My Australian National University colleague, former Australian ambassador to Myanmar Trevor Wilson, has just published a memoir about his years in Yangon titled Eyewitness to early reform in Myanmar. It is available for free download at the ANU Press website.

The book makes occasional mention of the former senior general. As Wilson explains, “Embassies had little or no contact with Commander-in-Chief Senior General Than Shwe, other than in the case of high-level visits.”

I assume this meant that even official communication resorted to a familiar repertoire of speculation. Such was his reputation that, in the old days, most people would rather not talk about the senior general at all.

When he was in charge, the senior general was rightfully the subject of unrelenting criticism. A lightning rod for disquiet was the 2006 release of a video of his daughter’s ostentatious wedding. It went viral: an early Myanmar case-study in the political role of email and social media.

But such critical scrutiny did not help to loosen his control.

The nadir for Myanmar’s democrats came with the crackdown on marching monks in 2007, followed soon after by the devastation of Cyclone Nargis, and then the sham popular vote on the 2008 constitution. Through it all, Senior General Than Shwe consolidated power, always a shadowy figure, shrouded in a dense cloak of conjecture.

After surrendering his command in 2011, it is worth emphasising how quiet the former senior general has become. Occasionally you still see an old photo of him, usually in a temple compound where he made a donation or helped to support some other meritorious work. Of course, he looms large at the Defence Services Museum in Naypyitaw, where some exhibits pay homage.

In other senses, he quickly retreated from the stage, allowing his former subordinates like U Thein Sein, U Khin Aung Myint and Thura U Shwe Mann to take the lead in reforming the political system.

There was talk that he played some active role in the 2015 purge of Thura U Shwe Mann from his senior Union Solidarity and Development Party functions. As ever, it is hard to know where guesswork ends and the truth might start.

Then, late last year, when U Than Shwe met with Daw Aung San Suu Kyi, we had a further reminder of the overwhelming authority that he used to hold. That meeting still feels like it was an essential step in the incomplete rapprochement between the National League for Democracy elite and their military peers.

For the NLD government, the retired senior general will require continued attention. They know that premature moves to change the political role of the armed forces could inspire abrupt responses.

They also have to handle his successor, Senior General Min Aung Hlaing, who looks like he is getting ready for a long turn in the commander’s office. Under the constitution endorsed by Senior General Than Shwe there is no obvious end to military influence in politics and society.

For the old general, it all seems to be going to plan.