Aerial view of the proximity of the land reclamation area to the settlement. Screenshot “Flow of Sand”, 2:47. Source: Author

Reclaiming the sea from the Melaka Gateway

Several large-scale futuristic land reclamation projects are underway on the coast of the Malacca Straits. The Malaysian developer KAJ Development has promised to transform the UNESCO world heritage city Malacca from a weekend destination to a 365-day economy by building the “Melaka Gateway”. On a total of 1,366 acres, they want to create new land from dredged sea sand for a deep-sea port, a cruise terminal, a financial centre and a maritime industrial park.

However, the project has not delivered what it promised. So far, only one island reclaimed from the sea sand is visible in front of the settlement of the kristang community in Ujong Pasir. In this settlement, where people of mixed Asian and Portuguese descent live, the Portuguese Creole language Kristang is spoken. The project has been put on hold until further notice, due to a mixture of poor planning, lack of transparency and rapid political change in Malaysia (with three prime ministers since 2018 and the most recent change of power in March 2020).

“But the damage has been done,” said Martin Theseira, one of my interlocutors during the field work I carried out in 2018 and 2019. He is among members of the community who seek to reclaim the sea by appealing to government officials, and, more recently, by joining forces with groups opposing land reclamation in Malaysia and Indonesia.

Members of the kristang community feel marginalised by the large-scale of the land reclamation project. Many of them are of Portuguese descent and practising Catholics, meaning they already occupy a marginal space in Malaysia where being Malay is synonymous with being Muslim.

What particularly bothers the inhabitants is that the creation of new islands in the immediate vicinity of their settlement threatens their whole community. Because of this spatial proximity, the area directly in front of their settlement increasingly silts up at low tide. Now that this area dries out completely, it is difficult for fishermen to pursue their profession. They catch less fish and cannot park their boats near the settlement.

Fig. 1 Aerial view of the proximity of the land reclamation area to the settlement. Screenshot “Flow of Sand”, 2:47. Source: Author

Another difficulty fishermen are facing is conflict with dredging boats. Shawn, a young fisherman I talked to, puts it like this: “Now I go to your house and I dig. You will say: ‘What’s this?’ Same for the fish. Correct? So, if they gonna take sand from the centre of the sea, the fish will run, lah. Because my environment is polluted, right? And the seabed will finish. The noise. The waters will become dirty. And when there are no stones, we can pass our net, when you dig, the stones will come up, so we cannot pass. Destroy our livelihood.”

He also finds it difficult to predict where and when exactly he will encounter dredging boats. As dredging boats quickly move from one place to another, it is difficult to determine where sand has been dredged or to make predictions about where a fisherman with his boat will get in the way of a dredger. From the coast, dredging of sea sand is not necessarily visible.

In addition to fishermen, whose numbers in the settlement have become small, restaurant owners are also affected. They depend on the sea, as they sell fish in their restaurants. Several of them have also stated that the stench that spreads from the silted surface during low tide is detrimental to business.  Flora, an elderly community member, shows an emotional response to land reclamation in a scene from my documentary film “Flow of Sand” (2019) : “It’s not nice to do this to our land. We’ve got only this for ourselves, for our Portuguese people, you know? So, by doing this, we feel very hurt.” She wants the developers to preserve the sea, but does not believe that this will happen. In this quotation, “land” is symbolic of a community built up over many years and which now sees itself as threatened. Fears include the possible slow eviction of the inhabitants. It would not be the first time. The land reclamation carried out in the 1990s has resulted in Praya Lane, where some members of the community used to live, being now largely deserted.

Land reclamation also involves the potential loss of the community’s living heritage. Peter Gomes, longtime village leader, points out that the land reclamation area could destroy the connection between the people and the sea. For him, the importance of that connection is clearly expressed in their festivals, Intrudu and San Pedro.

“In anything that we do, the festivals that we celebrate, have something to do with water. Pesta San Pedro is one of them. When the fishermen bring up their boats, they decorate it, and then we have a festival for that. Then we have Intrudu. Intrudu is our water festival. So, these two functions have something to do with water. And of course, if we take away the water element from our village, then these festivals automatically will die off. Slowly but surely.”

The land reclamation has already changed the way Intrudu is practiced, which celebrates the last day before Lent. Since land reclamation hinders the influx of seawater, the ritual of taking seawater to splash each other has been replaced by the use of tanks of tap water.

The inhabitants fear that the San Pedro festival will also become obsolete when fishing no longer plays a role in the community. The core of the festival is the blessing of the decorated fishing boats and the request for the blessing of St. Peter, the patron saint of fishermen, for a rich fish harvest in the coming season. But today there are only a few fishermen left.

During my field research, members of the community tried to capitalise on their Portuguese heritage and appeal to politicians at the federal level, after other means had apparently failed to stop the land reclamation. One such ineffective measure was a mock funeral that fishermen organised to protest against the development by carrying coffins that symbolised the end of their livelihood. They then decided to contact the then Chief Minister of Malacca, Adly Zahary, to discuss ways to strengthen the Portuguese settlement. They invited him to the settlement on the occasion of the San Pedro festival on 29 June 2019. After showing him the decorated fishing boats, they discussed possibilities for improving the prospects of the settlement. One idea was the revival of a twin city agreement between Malacca and Lisbon. Representatives of the Lisbon City Council and the Melaka City Council signed this twin city agreement in 1984 to promote social and cultural exchange and understanding of each other’s cultures. The signing of the twin city agreement spoke to the memory of Portugal’s “glorious times”, of which the inhabitants of the Portuguese settlements were presented as a living expression. Martin Theseira, the spokesman of the SPCAC (Save Portuguese Community Action Committee), a group membered by people in the community, welcomes the revival of the agreement. For him, launching new bilateral activities is an opportunity to promote both economic and tourist relations between Malacca and Lisbon and to preserve their cultural heritage.

Although the land reclamation project was not explicitly addressed at the time, Adly Zahary’s visit is clearly related to it. About a year earlier, on 5 June 2018, leading members of the community had submitted a community memorandum to him in which they expressed the community’s concern that the land reclamation project would have negative, irreversible consequences. They expressed concerns about the possible extinction of their community by saying that the Luso-Malays “and their way of life will become extinct unless they are protected and preserved for future generations”.

Representatives of the kristang community have now joined forces with other groups fighting against land reclamation. Under the leadership of Penang Tolak Tambak (Penang Resists Land Reclamation) and Koalisi Selamatkan Teluk Jakarta (Save the Jakarta Bay Coalition), the Save Portuguese Community Action Committee (SPCAC) signed the petition “Stop Stealing our Seas” on World Fisheries day on 21 November 2019. They called on the governments of Malaysia and Indonesia “to cease and desist from projects of island creation, coastal reclamation and marine sandmining.”

Where to go from here? For the members of the kristang community, the negative consequences of land reclamation are clearly in the foreground. For now, their attempts to establish relationships with politicians have yet to bear visible fruit. Yet they will likely maintain their opposition to the land reclamation project, drawing on their larger network of groups in and beyond Malaysian boundaries.

Research contributing to the documentary, “Flow of Sand”, benefitted from funding from the European Union’s Horizon 2020 research and innovation programme under grant agreement N°770562 (CRISEA). 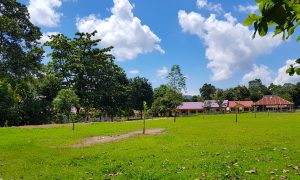 Voting out the landlords in Flores

Economic change is eroding the political power of traditional custodians of land in this part of Eastern Indonesia.