Red shirts on the march

The following pictures were taken on April 8, 2009, around Government House (I did not observe the protest at Prem’s residence). A great many people from many provinces attended the UDD protest. Clearly, it had mobilized considerably more people than the PAD had ever done. However, the mobilization mechanisms have probably been rather different, with the UDD mostly relying on the work of activist groups and locally based politicians. When I passed Dusit Zoo on my way to the protest site, I encountered eight buses organized by Phuea Thai MPs Wuthipong and Thitima Chaisaeng. The text on a red shirt was, “Truth Today Paetriu 52.” “Paetriu” is the informal name of Chachoengsao.

The UDD protest was like a “monarchy-free zone.” I did not see any pictures or symbols relating to it as a motivational resource (nor as a point of attack), except on the front page of one paper on display, which wished Princess Sirindhorn a happy birthday. However, some protestors carried the national flag. They stood in attention when the national anthem was played, ending it with “Chaiyo, chaiyo, chaiyo!” On the same day, the second part of an article by Borwornsak Uwanno appeared in the Bangkok Post praising Thailand’s supposedly unified and unchangeable “culture of paternalistic governance.”

Clearly, the UDD protestors did not share his ideas. Most of them probably respect the king and the nation. But their attack on the “bureaucracy” indicates that the Establishment’s ideology of “Nation, Religion, Monarchy” does not carry any much weight any longer with protesting up-country people (most of them obviously not poor peasants). Riggs’ bureaucratic polity has for some time been gone. It is the concomitant mindset that has survived in the Establishment and the bureaucracy that the UDD attacked.

More immediately, as one protestor pointed out to me, they wanted Abhisit to resign, because he had come to power by using the wrong means. Shortly before he told me this, I heard the speaker on stage setting a 24-hours ultimatum for Abhisit and Prem to resign. “Overthrow the bureaucracy – for democracy.” Stage near the Royal Plaza. Even the umbrellas are red! On the way to the main stage at Government House. Tent of the famous “Udorn Lovers.” “Association of people who love and miss Thaksin,” Angthong province. A number of community radio stations advertised their services, pointing to the fundamentally changed importance of means of political mass communication (beyond PAD’s ASTV). Nearing the main stage at Government House – no escape routes in case of danger. In front of the main stage at Government House. Fond of Thaksin – but no nice thoughts of Sonthi Lim. No nice thoughts for Abhisit and Sonthi Lim. The Democrats and Abhisit are part of the enemy. No fond feelings for the Privy Council either. 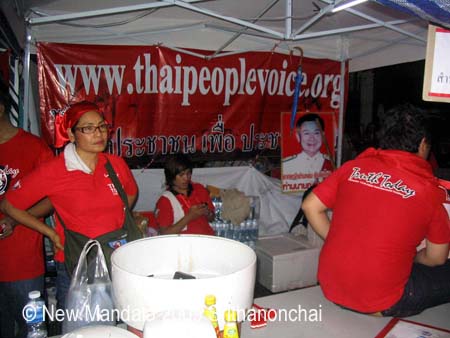 A web-based voice of the Thai people. Watching the speeches on TV.