[New Mandala guest contributor, Thorn Pitidol, recently interviewed Associate Professor Attachak Satayanurak, lecturer in history in the Faculty of Humanities at Chiangmai Univeristy. Attachak is a member of the Midnight University group of academics, and is a major proponent of the campaign “Vote Against the 2007 Constitution”. This post is part of New Mandala’s feature on the 2007 constitutional referendum.] 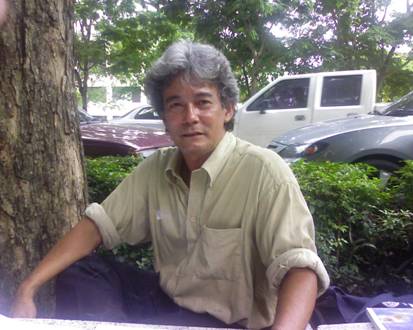 I asked Attachak Satayanurak why he opposes the 2007 draft constitution. Attachak’s respones focussed on the controversial issues in the proposed charter.

The point of departure between supporters and opponents of the draft 2007 constitution are differences in their beliefs about democracy. The proponents of the 2007 constitution, Attachak argues, hold the belief that there can and should be “an external” force to protect democracy from falling under the “dirtyness” of politics. This type of democracy can be described as “aristrocrat’s democracy”. Attachak, however, does not hold this view towards democracy. He says that for him and the Midnight University academics, democracy should be all about the people. He argues that instead of believing in the aristrocrat’s superiority we should strive for “people’s democracy”.

Attachak explained to me that the draft 2007 constitution tries to accomplish the goal of bringing in aristrocrat’s democracy by weakening the political parties. The electoral system is designed to prevent the domination of any political party. Moreover, political power will lean in favour of the group of non-elected senators. This will allow the “external power” to gain control over poltics. Sadly, Attachak reflects, is there anything that can ensure that this “external power” will be accountable to people more than to themselves?

The improvement in community rights is just an empty promise

In the end, people are being “deceived”

Finally, Attachak pointed out that the 2007 constitution drafting committee has tried to deceive people by telling them that the draft constitution will make it easier for the people to get rid of bad politicians directly. The drafting committee does not specify that while the amount of signatures required for the task is reduced, what people can do at most is to present their signatures to the senate, and hope for the senate to continue the task. Therefore, the group that will gain control over politicians will not be the people, but will, in fact, be the senate. Half of the Senate will be chosen by an “external power”. In the end, people are being deceived if they believe the 2007 constitution will allow them to gain control over politicians. Attachak concludes that only elites will benefit from the implementation of 2007 constitution.