Rice production after the flood The 2011 flood that had ravaged one-quarter of Thailand has not, surprisingly, adversely affected the overall rice production. That should be good news for the government. Since rice has become a highly politicized commodity, keeping rice farmers happy has also become a policy priority. But the Yingluck administraion is facing a rough road ahead with its flagship rice mortgage scheme, partially because of the program’s popularity but also because it is not likely to be sustainable given short-term market conditions.

Rice farmers responded to the devastating flood, which destroyed around 14% of rice paddies[1], in two important ways. First, those not affected by the flood increased their output to make up for the losses from floods. Such “bumper crops” are common strategy for farmers in a post-flood situation, particularly by increasing their output in the off-season.[2] As such, output of off-season crop for 2012 is expected to reach 12-16 million tons, a minimum of 20% increase from last year.[3]

Second, farmers whose paddies have been damaged, even partially, have opted for compensation. “Farmers figure they show photos of the flooded areas [and not the unflooded ones] of their farms to the authorities and get compensated. At 3,400 baht per rai, it just makes more sense to get money from the government and if they could get just 30% of their harvest, they could still sell it in the market,” reveals Sia Heng – a well known major rice miller in northern central plains.[4]Consequently, the government is facing mounting financial costs to both fund the rice mortgage scheme as well as to provide some remuneration to those afflicted by the floods. 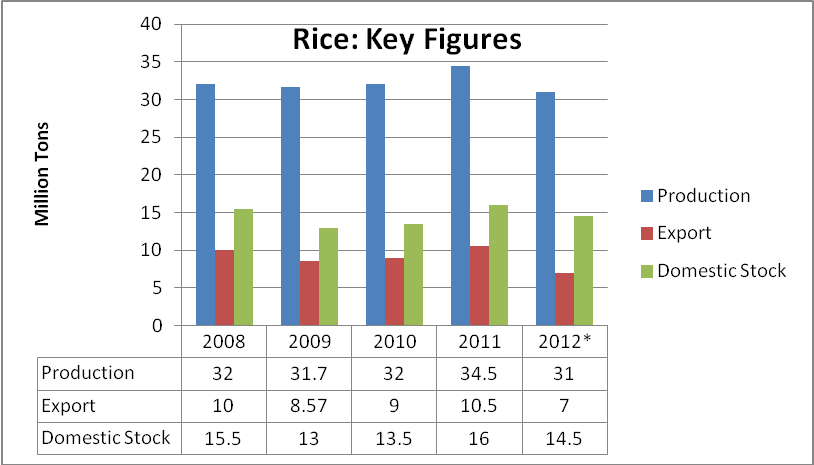 Source: Office of Agricultural Economics, Thai Rice Exporters Association. Note figures for 2012 are based on projections as of January 2012.

Despite the floods, the rice mortgage scheme has been welcomed by farmers. Since its inception in October, more than one million farmers have registered.[5] Given that the guaranteed price of White Rice stands at 15,000 baht/ton compared to an average of 8,400/ton during the Abhisit government, it is no surprise farmers are upbeat about the return of this former Thai Rak Thai policy. The scheme certainly has a number of flaws and complaints of delayed payment, a slow registration process and alleged corruptions at rice mills have ensued. Nonetheless, as shown in the table below, the guaranteed price of 20,000 baht per one ton of Hom Mali rice is much higher than the domestic market price, which stands as just above 15,000 baht.

Yet the floods have exposed an obvious disadvantage of the rice mortgage policy: farmers need to have crops. It’s unclear whether the compensation for flooded farms was a one-off deal or not. This could pose problems for farmers who may need months to recuperate from the flood and be able to farm again.

More importantly, however, the rice mortgage scheme has negatively affected exporters. Export figures between December 2011 – January 2012 dropped by 60% due to falling demand from the world market.[6] As a result of the rice mortgage scheme, the price of Thai rice is on average $100 more a ton compared to output from India, Vietnam and Pakistan.[7] Exporters could not compete with neighboring countries as the price of Thai rice is too high, causing a sharp drop in export. The outlook for 2012 is grim given the recent confirmation by the new minister, Boonsong Teriyapirom, that the rice program would be extended despite pleas from economists, exporters and some rice millers. “The government should re-think this policy. They have thus far failed to push the market price of Thai rice to a higher level than what they pay for. They end results are a drop in export, rising rice stockpile and higher costs to the government themselves,” argues TDRI chair, Dr. Nipon Puapongsakorn.[8]

But consumers may see a lower price tag for a bag of rice at the expense of the government and the exporters. Already the price of rice sold in Bangkok central market in January dropped to 3,000 baht per 100 kg from 3,215 baht in October.[9] The government still has a reported stock of five million tons of rice that will need to be released into the market soon. However, the more money the government loses on the scheme, the more doubt there is to its sustainability in the long run. Dr. Ammar Siamwalla warns price for consumers will go up eventually because the government has paid above market price to farmers. Then they will subsidize some of the rice (blue flagged commodity), which will cause a drop in domestic demand for market price rice.[10]

The Yingluck government is determined to press ahead with the rice scheme, however, arguing that the cost thus far hasn’t been as high as expected (largely because so many farmers have been flooded that they couldn’t turn in their crops.)[11] The government has not been clear about how exactly they will deal with the rising stockpile of rice and the decline in exports. Kittirat na Ranong, former Commerce Minister, merely opined “If next year [2012] we experience overstock rice because little can be sold or exported then we will tell the farmers to reduce output.”[12]