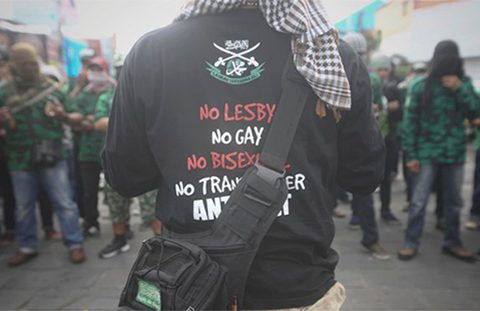 As anti-lesbian, gay, bisexual and transgender rage sweeps across Indonesia, Muhamad Haripin outlines the dangers of linking LGBT rights and issues with war.

Former president Susilo Bambang Yudhoyono’s sparkling record of political stability (or stagnation, as some might argue), and economic development were tarnished by his failure to prevent discrimination and violence against Indonesia’s minority groups.

His religious affairs minister, Suryadarma Ali, recently sentenced to time in jail for corruption, repeatedly showed not only a lack of empathy but also directly threatened minorities.

With recent events, do Indonesia’s embattled minorities now have to also live under threats and persecution during Joko “Jokowi” Widodo’s administration?

A few weeks ago Defence Minister Ryamizard Ryacudu made some extraordinary and controversial statements – both to do with the kind of wars Indonesia now faces.

First, as part of the growing anti-lesbian, gay, bisexual and transgender rage sweeping across the archipelago, he claimed that the country’s LGBT movement was part of a proxy war to conquer Indonesia.

Following that, the minister suggested that Indonesia should restrain from buying weapons. According to him, Indonesia has no real enemy, especially as the regional situation over the last 50 years has been conducive to economic development, and the related peace that brings. As such, the military instead needs more equipment designed to counter and mitigate contemporary threats — namely terrorism, natural disasters, and infectious diseases.

The LGBT issue also provoked a few retired officers to share their views. Kiki Syahnakri, former deputy army commander, argued that LGBT rights are a weapon of hegemonic countries, in the form of soft power, seeking to gain control and destroy other countries’ economic strength and culture. Indonesia is considered to be a vital target.

Both Ryamizard and Kiki are viewed as hard-liners among Indonesia’s military elites. Back in 2003, Ryamizard said that the murderer of Papuan activist Theys Eluay was a hero.

A day before Ryamizard’s statement, President Jokowi reiterated his administration’s commitment to revamping Indonesia’s military capabilities. The Defence budget would reach 1.5 per cent of GDP, approximately Rp 250 trillion (US $18.66 billion), if Indonesia could achieve 6 per cent economic growth. LGBT issues and the defence budget are rarely discussed in the same vein. While the president has yet to make any comment regarding the debate on same-sex marriage, his minister chose to side blatantly with those who are against it.

Ryamizard’s statement probably won’t cause a sudden change in policy at the defence ministry. The ministry has been busy with the “bela negara”, or state defence, program – its new initiative to instil and promote patriotism, nationalism and Pancasila values among the public.

Cooperating with various social groups, the defence ministry has arranged training for civilians throughout Indonesia, with students, blue-collar workers, and teachers persuaded to participate. Given the target of recruiting one million bela negara cadres in the next ten years, the anti-LGBT view could probably be added subtly to the existing bela negara curriculum.

It is therefore unsurprising that a call for LGBT rights, and its vehement rejection, was, by and large, framed as a proxy war. The military, particularly under the current leadership, has been a strong advocate of this type of thinking.

TNI Commander General Gatot Nurmantyo has held rallies outlining this contemporary form of warfare — where enemies are everywhere, yet cannot be easily detected. He argues that foreign powers no longer rely upon conventional measures of control and conquest based on territorial occupation nor colony building. Instead — as repeatedly echoed by Indonesian military elites — ideological and cultural infiltration and economic sabotage are how the fight is won.

This standing theory seems to confirm the danger the LGBT movement represents — since this unconventional concept of sexuality is regarded as being brought to Indonesia from abroad, or not genuinely borne out of the country’s own traditions. Therefore, it is perceived as perfectly natural for the nation ‘to fight’ the LGBT movement.

In this approach, the military establishment stands on firm ground. The TNI is ranked as the most trusted institution in the country, according to national surveys conducted by polling agencies. Based on this, it could be suggested that the military is now considered socially acceptable by a majority of the Indonesian public. People might disagree with them on some issues, but in general, people trust them.

As for Ryamizard, he is also riding high. He has the support and legitimacy his ministry needed to implement the bela negara project. He could also interpret the Nawacita, Jokowi’s 9-point priority program inspired by Soekarno’s teachings, as a nod toward inward looking and security-minded nationalism.

This is massive achievement for the military institution, particularly considering where it was during the heyday of Reformasi. At that time, a call to get back to the barracks was common. The military’s political role was gradually stripped away as well.

Playing the populist card is common practice among politicians; Ryamizard is no exception. However, the public should not let their political leaders’ statements get out of hand. Is Indonesia really under threat from a proxy war today? What proof does Ryamizard have of the country’s LGBT minority and a proxy war? In a democratic Indonesia, sensible arguments should be the currency bankrolling the exchange of ideas.

Moreover, the whole situation raises a serious question about the path of Indonesian nationalism the government currently advocates; will it become a mantra to justify particular views and norms – particularly, those that share similar principles with the military camp? Or a space that enables divergent views to coexist peacefully?

Let’s hope to hear much less controversial social commentary from Ryamizard in the future.