Since 2016, after the unprecedented level of anti-LGBT panic, the term ‘LGBT’ has not only become a catchall to refer to any people with non-normative gender or sexuality but also has continuously been used by conservative groups to inflame moral panic. During the nation-wide anti-LGBT panic four years ago, politicians, religious conservative groups, and state officials associated LGBT with a subversion of Indonesian culture, a threat to national stability, contagious behaviour, and immorality. In its attempts at persuading the Constitutional Court to criminalise homosexuality and its continuous anti-LGBT campaigns, Islamic pro-family group, Aliansi Cinta Keluarga (Family Love Alliance, AILA), continue to associate the spike in HIV/AIDS transmission with LGBT sexualities.

The other anti-LGBT groups, which have been increasingly vocal in condemning queer people, have followed suit, dressing up their homophobic sentiment in a scientific fashion. I call this strategy ‘scientific homophobia’, in which the deliberate distortion of academic research, the misuse of outdated research, and the obstruction of the larger academic debates have been deployed to convince the public about the danger of LGBT people to society. 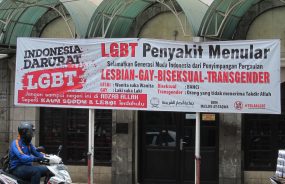 Morality and LGBT rights in Indonesia

First, scientific homophobia often works through the strategic merging of scientific arguments and conservative religious discourse. Agung Sugiharto, or popularly known as ‘Sinyo’, founded an organization, Yayasan Peduli Sahabat, (Care For Friends), in 2014. This organization aims to assist ‘LGBT’ people in ‘returning’ to heterosexuality and promote ‘objective’ information about non-heterosexuality and sexual orientation. Clearly, the use of the term ‘objective’ here attempts to create an aura of scientific and objectivity of their arguments. His book, “Anakku Bertanya tentang LGBT” (My Kids Ask about LGBT), published by Quanta in the same year, argues that same-sex attraction is a form of a divine ordeal (cobaan Tuhan). To him, ‘same-sex attraction’ is not a sin, insofar as the individual does not translate it into concrete homosexual practices. Based on this formula, he invites LGBT people to practice ‘self-discipline,’ restraining their homosexual desire and channelling it to heterosexuality. Besides the citation of some hadith and passages from the Koran, the mention of the National Association for Research and Therapy of Homosexuality (NARTH) in the book signals where he derived his ideas from. NARTH is a U.S. based conversion therapy established in 1992, and activists and scholars have strongly critiqued its approaches. This idea of ‘aversion therapy’ and ‘ex-gay movement’ has been replicated in different parts of the world, including Uganda and Cape Town.

The second contour of scientific homophobia manifests in the ways anti-LGBT actors cherry-pick an academic research. In December 2019, Dwi Estiningsih, a politician from the conservative party, Prosperous Justice Party (Partai Keadilan Sejahtera, PKS), made a series of tweets, mostly arguing that LGBT is a form of mental illness. To strengthen her argument, Estiningsih ‘cherry picked’ parts of some academic journal articles on which to base her arguments. After some queer activists exposed her deliberate ‘distortion’ of academic research, she eventually received direct critiques from the scholars themselves.

Scientific homophobia is also evident in the ways anti-LGBT groups deliberately obscure the larger terrain of academic debates. An example comes from the recent article by Ihsan Gumilar published by the Republika Newspaper on January 10. Positioning himself as a researcher and expert of neuropsychology, Gumilar argued that LGBT is a product of external influence, in which sexuality is located in the brain and easily affected by external stimuli. Here, the ‘brain’ is clearly positioned as ‘heterosexual’, thus obscuring the critical examination that ‘heterosexuality’ itself might also be produced by external influence, if we wanted to extend his logic. In doing so, as a ‘scholar’, Gumilar deliberately obscures the public from the larger academic debates concerning sexuality and gender issues. Discussions on whether gender and/or sexuality are biologically or socially determined (or even both) have been happening since the 1950s, with key figures including Milton Young, John Money, and Anne Fausto-Sterling, among others.

Importantly, the contemporary critical approaches to science have also exposed how science cannot be easily disentangled from cultures and ideologies. For instance, eugenics justified a specific race as superior to others, representing a product of the intersection of racism and science. Queer theorists and also other social scientists have demonstrated how gender and/or sexuality are not objective phenomena because they are is historically contingent, locally specific, and thus culturally dynamic. For instance, the normalization of heterosexuality is also a historical product. Indonesia’s New Order regime (1966-1998) has provided strong evidence on how the government, through its policies and practices, normalized, and thus positioned heterosexual reproductive families as the basis of national stability.

Ironically, while opponents of LGBT rights position LGBT as a product of Western cultures, they cite ‘Western’ academic studies and/or ‘Western developments in LGBT rights’, which are entirely detached from the lived experiences of queer Indonesians themselves. For example, AILA believed that without the criminalization of homosexuality, LGBT people would soon demand same-sex marriage be made legal in Indonesia. This is one-sided claim, because Indonesian LGBT activists mostly channel their energy towards end violence and discrimination against queer people, instead of advocating for marriage equality. Many activists even see same-sex marriage as a farfetched goal, irrelevant for the current needs and situation of queer Indonesians.

Lastly, scientific homophobia manifests through the deliberate ‘exploitation’ of professional titles and expertise. I have witnessed a broadcast message on Whatsapp, supporting anti-LGBT views by citing an expert opinion from a medical doctor, and arguing that LGBT people has caused the wide spread of HIV/AIDS in Indonesia. This accusation, in fact, ignores how discrimination and prejudice toward LGBT has impeded HIV/AIDS prevention programs.

And this is what makes the current homophobia dangerous. It does not only promote hatred, but also continues to deprive the Indonesian public from the latest knowledge and debates about gender and sexuality.

Hendri Yulius is the author of ‘Intimate Assemblages: The Politics of Queer Identities and Sexualities in Indonesia’ (Palgrave Macmillan 2020). 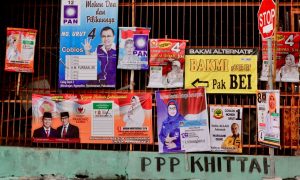 A reflection on the Jokowi and Prabowo campaign strategies and how they unfolded. Social media companies have more control than the government of Indonesia in limiting the freedom of expression of its citizens. To what extent will they control the political discourse in Indonesia?