Sepon mine in Laos to be sold to China? 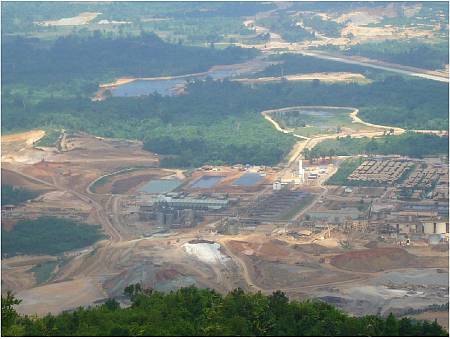 Over recent months there have been a spate of reports in the business pages about the possible sale of the Sepon mine in Laos to the Chinese state-controlled Minmetals Group. (I am currently putting together a longer post with some of this history.) The Sepon gold and copper mine is owned by an Australian company, Oz Minerals, which has fallen on very hard times in the wake of falling commodity prices. Oz Minerals has some very big debts and the banks are running out of patience!

For a while the Sepon mine was a southeast Asian investment jewel for the small Australian mining company Oxiana. But since the merger in mid-2008 between Oxiana and zinc producer Zinifex (the merger which produced Oz Minerals) there has been little but bad news. According to one media report the Sepon mine was valued at US$2.4 billion last year. This year the valuation is US$560

This report states that Oz Minerals shareholders will be meeting tomorrow to vote on the sale of Sepon and several other mines. There have been some other alternatives put on the table but the Chinese deal seems most likely to get up.

If any New Mandala readers have thoughts about the implications of this sale for mining operations in Laos I would be interested to hear them. The Sepon mine has, as far as I know, a very good reputation for the way it has managed social and environmental impacts. Could this change with a sale to Minmetals?

June 11 (Bloomberg) — OZ Minerals Ltd.’s shareholders approved a plan to sell $1.39 billion of assets to China Minmetals Group to cut debt after the Chinese company sweetened its offer yesterday to fend off rival proposals. About 92 percent of shareholders voted in favor of the motion at the Melbourne-based company’s annual general meeting in the city today, OZ Minerals said in a statement to the Australian stock exchange. The approval required a minimum of 50 percent of acceptances.