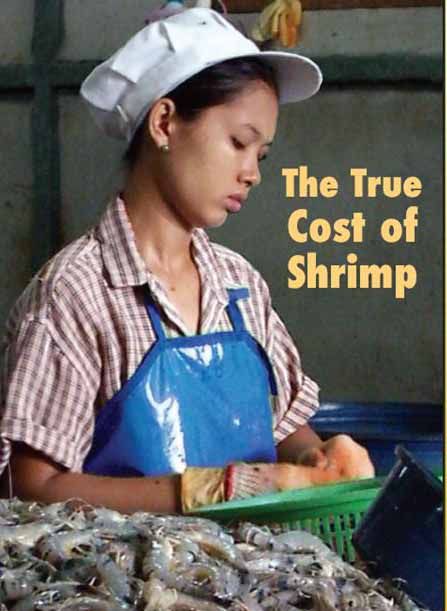 The Solidarity Center in the United States (Wikipedia has some interesting background) has issued a disturbing report on labour exploitation in the shrimp industry in Thailand and Bangladesh [true-cost-of-shrimp.pdf]. The report has received some good international coverage (here, here and here). In relation to Thailand many of the charges of abuse focus on one particular factory: Ranya Paew shrimp processing factory in Samut Sakhon which was raided by police and immigration officials in September 2006.

Ranya Paew was more like a fortress than a factory, with 16-foot-high barbed-wire capped walls, an armed guard force, and an extensive internal closed-circuit television system. Behind the walls, the police found a scene that one report described as “little short of medieval,” with hundreds of workers literally trapped inside the compound, living in squalid conditions, forced to work long hours, and subjected to physical, emotional, and sexual intimidation and abuse. Workers who angered the employer were often “put to shame” in front of others by having their hair cut or shaved in patches. Women and girls were stripped naked and publicly beaten as a form of discipline.

Most of the workers at Ranya Paew were Burmese migrants who relayed shocking stories about life inside the factory. They told of 16- to 20-hour shifts, filthy conditions, low pay, and forced labor. Police investigators learned that managers demanded months of unpaid work to meet debts to labor agents, or to pay for basic safety equipment, housing, even food and medicine. One worker noted that she worked for three months without pay and even then received only 200 baht ($5.60) the fourth month, after 500 baht ($14.10) was deducted from her wages to pay her labor agent’s fee and to cover meals, housing, and safety equipment. She claims she peeled 18-20 kg. … of shrimp per day.

Other workers said that if they made a mistake on the shrimp peeling line, asked for sick leave, or tried to escape, they could expect to be beaten, sexually molested, or publicly tortured. After interviewing more than 280 workers, police took 63 women and three men to a shelter, suspecting that they had been trafficked and/or forced to work against their will. Another 22 were deported; nearly 80 returned to work at the factory, which remains in operation. Despite widespread worker rights abuses, including child labor and human trafficking, the owner was charged only with employing children under 15 and failing to provide holidays and time off. Though these charges are serious, they were treated as first-time labor code violations. The owner initially only paid a fine of about $2,100 and has returned to work.

The abuses documented at Ranya Paew are further evidence of the problems worker rights advocates have noted for some time. In addition to long hours, forced labor, and child labor, Ranya Paew opened the lid on many hidden yet systemic worker rights problems of the Thai shrimp industry:

The case of Ranya Paew is clearly a very disturbing one. And the report does note a number of other violations of the rights of workers, especially the most vulnerable migrant workers. But the shrimp industry in Thailand is huge – Thailand is the world’s largest shrimp exporter – and I do wonder if it is fair to describe a whole industry in terms of what appears to be a relatively small number of cases.

American labour unions are not completely disinterested when it comes to discrediting the hugely lucrative Thai shrimp export industry. The United States imports more shrimp from Thailand than from any other country and over the years American shrimp producers have waged various campaigns against shrimp imports. Thefishsite.com reported in December 2007 that Thailand had “obtained a [WTO] verdict which will probably substantially reduce the current [US] duty on Thai shrimp, or even abolish it.”

While the Solidarity Center report certainly makes some legitimate points about the violations of workers’ rights, I don’t think it’s too cynical to suggest that it should be read in the context of America’s ongoing internal debate about the impacts of free trade.