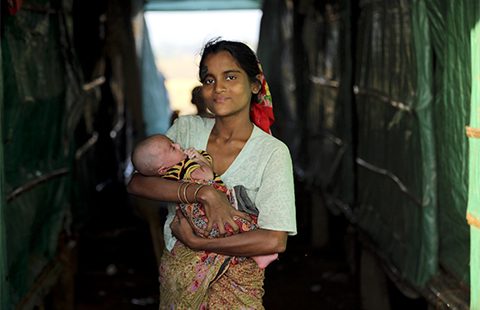 Shutting women out no path to peace in Myanmar Myanmar’s keystone Union Peace Conference (UPC), which concluded on 16 January, is one step towards ending decades of conflict and violence in the Southeast Asian nation.

With Myanmar’s women major stakeholders in peace, you could expect their voices to be an important part of this conversation. But where were they? Clearly not in Naypyitaw where 93 per cent of delegates attending the conference were men.

This, unfortunately, comes as no surprise. Women’s experience of and voice in transitions from conflict to peace are still systematically ignored, both in Myanmar and elsewhere.

Here, the ceasefire process underway since 2011, has been dominated by men in public office and in military uniforms, despite agreement urging the inclusion of women across negotiations teams and processes at a minimum 30 per cent. Worryingly, the military sent no female representatives at all to attend the UPC; the Government sent six women and 69 men. In other words, only eight per cent of the Government’s delegates were women. This also runs counter to Myanmar’s international obligations under the Convention on the Elimination of All Forms of Discrimination Against Women (CEDAW).

The women who did participate in the UPC report facing a variety of challenges. This included having their input removed from the meeting summaries to their presentations being cut short. These stark images paint a bleak picture for the prospects of an inclusive peace and widespread reconciliation in the country.

Without many more women in a diversity of roles, Myanmar’s peace process will be like so many others: exclusive and unsustainable. It will reinforce existing power inequalities rather than changing them for more inclusive and democratic arrangements. The voices and experiences of women will be missing from post-war initiatives and arrangements.

This is happening right now where the (partial) nation-wide ceasefire agreement does not adequately identify nor address the types of violence and insecurity women face. The exclusion of women is also problematic because it overlooks their role in violence. A recent study on women, peace and security undertaken by International IDEA shows that although men are the main perpetrators of violence, women also participate in violent conflict and uphold patterns of discrimination and violence. The same patterns also cause women to suffer from insecurity and violence in ways that are particular to women; in ways that are ‘gendered’.

Study after study affirms that women are important stakeholders in peace and conflict because they are impacted by and impact on violence in very specific and gendered ways. Peace negotiations must therefore include the experiences and the voices of women, or negotiations will be flawed. In short, women’s involvement in peace building is essential for sustainable peace.

Given that on average a country coming out of conflict has a 50 per cent chance of relapsing back into conflict within five years, more comprehensive peace-building strategies are essential. In Myanmar, women active in politics and civil society possess much-needed expertise that must be tapped in to for the peace process to be sustainable.

Through their work with the women, peace and security agenda on both a local and a global level, women from Myanmar have deep understanding of relevant international obligations, possess comparative knowledge from other countries going through similar transitions, and have skills essential to the flourishing of trust across political and ethnic divides. Women’s experiences can in this way enhance the viability and the legitimacy of the peace process, and decrease the risk of conflict breaking out again.

The proposals advanced by the women’s peace movement emphasise the importance of paying attention to human security and transitional justice, the rehabilitation and reintegration of both soldiers and refugees, and just land reforms and development initiatives that are inclusive of social-service needs. As Khon Ja from the Kachin Peace Network so recently and succinctly put it, without justice, there is no meaning of peace.

So how can women’s inclusion be increased?

A new policy paper from the Alliance for Gender Inclusion in the Peace Process (AGIPP) provides policy-relevant recommendations to enhance women’s participation, including quotas, gender audits, and the introduction of domestic legislation aimed at eradicating the violence and discrimination women face.

A new government was elected in November last year. This is an excellent opportunity for them to show that they are serious about the democratic transition. However, if the conversation continues to be as male-dominated and one-sided as it was during the UPC, opportunities to make the transition, and the peace process, both inclusive and democratic will be lost.

Jenny Hedström is a PhD student at Monash University and the editor of International IDEA’s report Women in Conflict and Peace, available in English and Myanmar (selected chapters). The views expressed in this article are the author’s and do not necessarily represent the views of International IDEA, its Board or its Council Members.