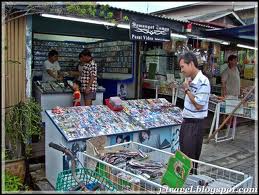 Last time I write, very struggling wat. Since den, got job in Johor selling DVD like I dream. It the best pirated DVD shop in Johor too, do not accept cam versions, only screener one.

As a Singaporean, I put my reputation on quality. It good life here sometime. Malaysia not so bad. My boss, Mr Lim, also very generous. Last week he even upgrade my lunch hour from 15 mins to 20 mins walao.

But also sometime hard life here. Now I know wat it like to be immigrant labour. Hard life lah, to be immigrant. I miss my Mother’s Indonesian maid, Ibu. She even carry my national service backpack lah. Now in Johor have to carry all d boxes solo kenna sai.

Sometime I worry as Johor can be quite dangerous one. Not like Singapore. Don’t have Ibu to protect me lah. One time I carry the boxes from the store room, mostly DVD for Tai Tai (Love Actually, Bridgette Jones etc) and some punk came with Carrefour trolley pole to beat me for dem lah. I say “can take” and dat ah beng did. Escaped unhurt, don’t worry lah. Can imagine ah beng crying for Hugh Grant now. Some ah beng hor. I understand dat tho, he handsome ang moh one.

Another time I walking to work, I see two car chase down a little old Malay lady in a new Proton (dun remember model lah, so many new one) and stop her. Some more piew ah beng get out, also with Carrefour trolley pole to beat her, but she escape hard lock left in reverse. So Gran Turismo style. I was sibeh impressed one. That little old Malay auntie inspirational. The guy then look at me cause I looking at them, I ask they been to Carrefour recently, den I run. Don’t look back in anger hor.

Later I see that very same Malay auntie selling kebab outside Carrefour at a night market. Maybe I can also afford Proton with my salesman job lah. Aiyo even traditional night market now located at Carrefour in Malaysia. Anyway, I go an ask her if report to police. She say she did, but police dun care really. I ask why hor. She say wrong jurisdiction. I become angry one. No longer sian after lifting DVD boxes all day.

My Singaporean sense of justice come out of the closet: “Wrong jurisdiction wat lah, you almost die but in wrong jurisdiction for police wat”. She say she go to the other jurisdiction police office, but they also say ‘wrong jurisdiction’ and ask her to go back to the one where she came from. She say she give up, more trouble than it worth. Cannot believe this attitude. Why so sian lah? Why police so lazy lah? They can afford my pirated DVD, cannot afford to help attempted murder wat?

This fear it was on my file is wat prevented me from pursuing another dream of mine: to be a traffic warden. Cannot have blogstar stalking conviction on record mah, even if you are BA Hons NUS graduate. Lee Kuan Yew and his son (you forgot his name?) make sure we got to have good morals to have good jobs in Singapore. Singapore only one jurisdiction: Singapore.

Anyway, dat enuff for now. If you wan DVD can do postal order. Good quality only. I stake my reputation on it. Please email me for your request soon lah. Not sure how long I stay in Johor if like this always.